For Captain Richard Cruz, donating blood is a good way to give back and help save lives when off-duty.

Last Fri. Dec. 6, the city of Mission held the Battle of the Badges Blood Drive at the Parks and Recreation Building. The blood drive, run by Vitalant (formerly United Blood Services), is unique in that each donor votes for either the Mission Fire Department or the Mission Police Department. 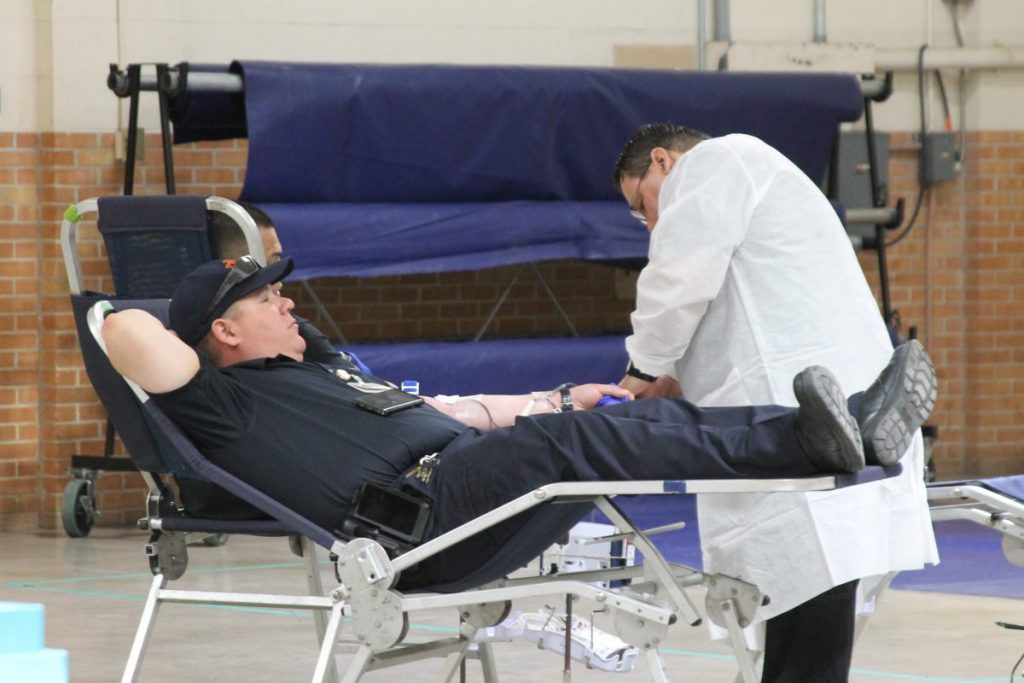 Last year, the Fire Department won the Battle of the Badges. According to John Bryan Sandoval a Donor Recruitment Specialist with Vitalant, that’s a rare feat.

“It’s surprising,” Sandoval said. “We have it [Battle of the Badges] in Edinburg, and PD normally takes it because their units are bigger. But fire took it last year, so we’ll see.”

Sandoval noted that these drives create awareness about what donating blood can do for everyone in the community, and it’s not just something a public servant can do.

“It’s important for everybody to do it [donate blood], but we come here because we know they’re [public servants] of that ilk, of that mindset to protect and serve in many different ways,” Sandoval said. “Even if it’s just in a civil manner in the office or what have you, they know that the preservation of life is really, really important.”

Sandoval added that while the nonprofit organization underwent a name change, it was the same group.

“It’s the same great company that you may have donated to in the past, it’s the same great people,” Sandoval said. “We kind of unified under one name to create a big umbrella – every state had its own name for the same service, and we said ‘okay, let’s just do one big name.”

Blood drives like Battle of the Badges encourage people of all walks of life to give back, and educate on the importance of donating.

“It’s important for anybody to donate because blood is not a resource that can be replaced or substituted with anything else,” Sandoval said. “One donation can save up to three lives, and the need is always there.”

Because people are often busy during the holiday season, these months usually see a dip in donations.

“We understand it’s not that people don’t want to give, but they get busy,” Sandoval said. “So during the holidays our donorship really dips down, but the need is still there. It’s always important to give, because you never know when it could be you needing it, and in the face of certain tragedies we may need a lot of units.”

Cruz, a captain with the Mission Fire Department who participated in the last Battle of the Badges, was confident Fire would win the friendly competition for a second time.

Cruz cast the first vote in this year’s drive. For him, a bit of discomfort for a short amount of time is worth it if it saves others.

“There’s always people who need a blood donation,” Cruz said. “It’s a little sacrifice on our part, a little pain, but that helps someone else’s life.”

The blood drive was held all day, from 8:30 a.m. through 5 p.m. At the end of the day, the Police Department won bragging rights and took the win in this year’s battle.