The Agua Special Utility District board will switch from city- and county-based seats to single-member districts on Dec. 31.

Members of the utility board, who spent months planning for the switch, approved the new single-member districts on Monday night. 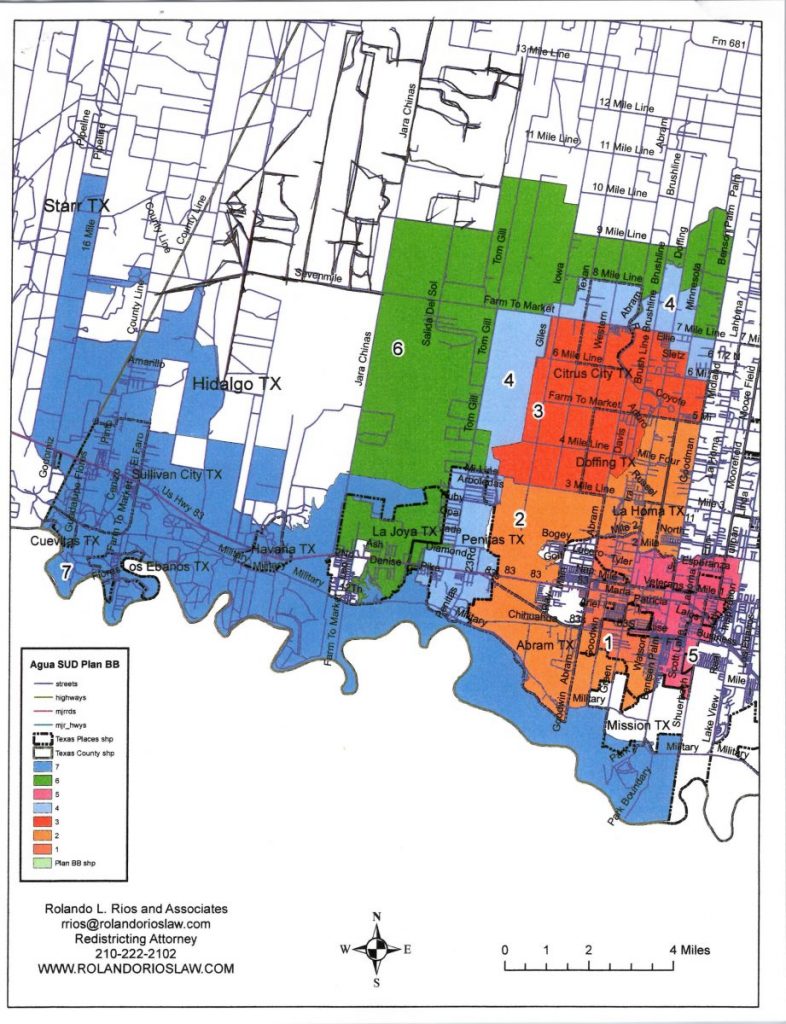 “I think it’s something good,” said utility board President Lloyd Loya. “Something positive.”

The utility district hired attorney Rolando L. Rios of San Antonio, an expert on redistricting, to draw the single-member districts.

The utility board created a subcommittee, which included Loya, board Vice President Cesar Rodriguez Jr. and board Secretary Adolfo Arriaga, to handle the switch to single-member districts. They worked closely with Rios, General Manager Jose E. “Eddie” Saenz and utility board attorney Frank Garza throughout the process.

“We reviewed it and brought it to the board,” Loya said. “And we spoke about it in executive session. And everyone liked the way the map came out.”

Under the current system, which state lawmakers created in 2005, the board consists of seven members.

The system allows a minority of utility district customers — residents of Mission, Palmview, Peñitas, La Joya and Sullivan City — to control a majority of the board.

In 2017, when the Texas Legislature passed a bill that replaced a rural Hidalgo County seat with a seat reserved for a resident of La Joya, the utility district provided lawmakers with data about the imbalance.

At the time, the utility district had about 15,250 water and sewer connections in Hidalgo County. Residents of Mission, Palmview, Peñitas and Sullivan City accounted for just 5,900 connections, but they controlled four of seven seats on the board.

It required each member of the board to represent “a unique subdistrict containing, as near as practicable, one-seventh of the total number of residents in the district.”

Members of the utility board discussed the switch in July, when they held a budget workshop on South Padre Island.

After discussing the draft maps, the board voted 6-0 to adopt the final map on Monday night. Director Esequiel “Zeke” Ortiz Jr. didn’t attend the meeting.

The final map included a district for every incumbent director except Roger Hernandez, who joined the La Joya City Commission on Tuesday and will not run for re-election.

District 3, a stretch of unincorporated suburban sprawl north of Palmview, represents about 8,100 people.

The single-member districts take effect on Dec. 31. District 1, District 2 and District 3 will appear on the May 2020 ballot.