Texas high school sports teams get to take a much needed break next week when the UIL mandated five day off rule comes into play.  For basketball teams it comes at a point where most teams need it, having wrapped up a healthy dose of tournament play and numerous non-district games. Most of the girls’ basketball teams of the Big 7 have already played close to, or more than, 20 games so far this season.

For the coaches and athletes of these teams one must be careful to not look forward to that break too early however. District play started for the girls of District 30-6A this past Tuesday and continues tonight. The teams of District 31-5A start their district slate tonight. 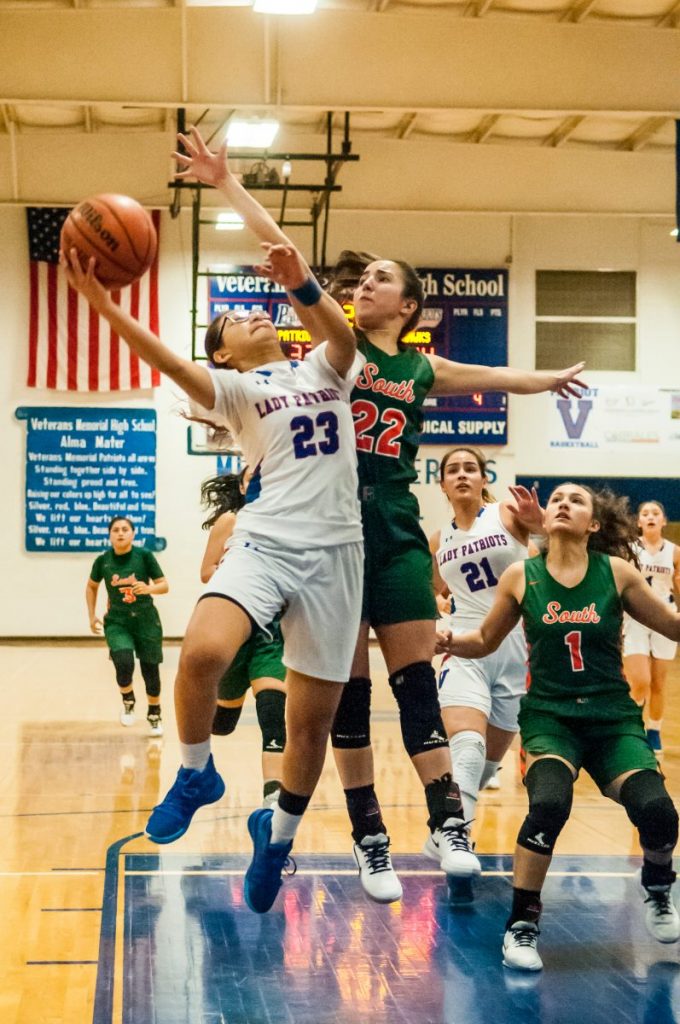 Mission Veterans’ Kaylee Flores has a Harlingen South defender in her face as she goes up to take a shot during the second half of the Lady Hawks’ 51-39 non-district game victory over the Lady Patriots Tuesday night. Progress Times photo by Luciano Guerra.

The timing of these games doesn’t seem to bother the coaches I spoke with this past week.

“You have to start (district games) sometime,” said Mission Veterans coach Rafael Cantu Jr. “It’s better than playing after a layoff. It keeps us in a rhythm.”

La Joya coach Juan Luis Gonzalez only had to look to last season to know what can happen when teams have a long break between games. .

“District play in the holidays has been a back breaker for us in the past,” he said. “Last year we started 2-0 and after that everything went downhill as we lost seven straight.”

Nicole Villarreal, coach of Sharyland Pioneer, talked about the high number of games played already this season and the timing of their district opener.

“The challenging non-district games and tournaments are designed to prepare (us) for our district season, so having one district game prior to the break will enable us to stick to a routine we are accustomed to and it sets the tone for our return (from the break).”

As stated before, the girl’s teams of District 30-6A began play Tuesday and it began for the three Big 7 schools from this district with mixed results.

La Joya defeated McAllen Rowe 45-24 to improve their overall season record to 13-9. The Lady Coyotes travel to Mission tonight to take on the Lady Eagles at 7:30 pm.

La Joya Juarez-Lincoln dropped their district opener to McAllen High 63-18 and fell to 2-15 on the season. They play host to PSJA High tonight at 7:30 pm.

All three teams are hoping for a playoff spot after each failed to qualify last year.

As stated before, opening night for district games for the girls’ teams of District 31-5A begins tonight.

The Lady Diamondbacks of Sharyland Pioneer were the district champions last year and travel to PSJA Southwest tonight to begin the defense of that title. Pioneer currently sits at 8-12 on the season after a 59-40 loss to Edinburg this past Tuesday as part of that challenging pre-district schedule Villarreal spoke of.

Villarreal expects her team to be ready.

“I think playing the quality teams we faced did exactly what they were supposed to do,” said Villarreal. “We competed and learned from the losses and our girls experience growth.”

The Lady Patriots of Mission Veterans were the districts second place team last season and come into tonight’s opener with a 13-8 record following a 51-39 loss to Harlingen South this past Tuesday. Veterans is on the road to face Rio Grande City tonight at 6:00 pm.

Two teams that tied for fifth place in the district last season, one spot out of the playoffs, will square off at La Joya Palmview tonight at 7:30 pm when the Lady Lobos of Palmview host the Lady Rattlers of Sharyland High.

Sharyland High is currently 4-17 on the season and Palmview is 5-13.

Once the break ends the teams of District 31-5A will get right back at it with each team’s second game of the district schedule coming on Monday December 30.

On that date, Mission Veterans hosts PSJA Southwest at 1 pm, Sharyland High hosts Roma at 2 pm and Pioneer will host Palmview at 2:30 pm.

The teams of District 30-6A will not return to district play until Friday January 3, but all three of the Big 7 schools in the district will be playing non-district games to stay ready.

Mission High will travel to Edinburg Economedes on Saturday December 28 for a game at 11:30 am and then host Los Fresnos at 10:30 am on Tuesday December 31.

La Joya High will host Edcouch-Elsa on Monday December 30 and Juarez-Lincoln will travel to Weslaco to face Weslaco East. Both games are scheduled for 2:30 pm.