As a child, Michael Bricker always wished for the same thing as a gift.

“As a kid I remember whenever I got a present I’d always open it up hoping there was a puppy in there because that’s all you see in movies and TV, a puppy in a box and I would’ve loved that as a gift,” Bricker said. “Who doesn’t want to get that?” 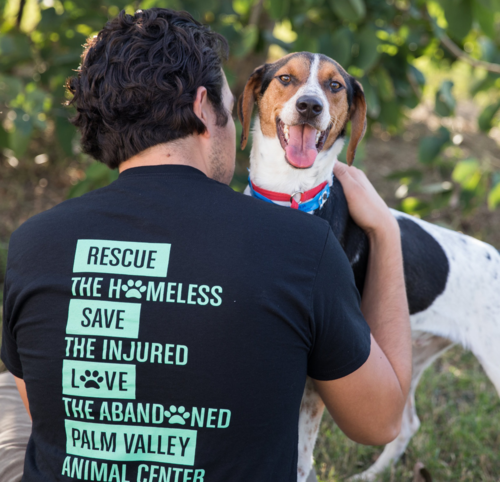 Now, as executive director of the newly named Palm Valley Animal Society, Bricker works to ensure that pets across the Rio Grande Valley go home with the perfect family.

With 500 dogs and 300 cats between its two locations in Edinburg that are ready to be adopted, Bricker is ensuring that prospective adoptees are ready to adopt a pet-and even gift one to someone special for Christmas.

“I do recommend pets as a gift, especially for the holidays,” Bricker said. “It’s one of the things people may think is a bad idea since the person who gets the gift didn’t pick the pet or may not want it so there may not be a connection or bond between the two, but there have been studies from the Humane Society of the United States showing that there is no evidence that supports any negative effects from gifting a pet.”

The center event opened a third location last weekend in downtown McAllen that will be open on weekends during the society’s new hours of 11 a.m. through 7 p.m.

These changes, Bricker explained, help make it easier for families to visit any shelter location and adopt an animal.

“It’s not an application process as much as it is a counseling session,” Bricker explained about the adoption process. “We get to know the family and ask them a series of questions such as, what type of dog they want? Do they want something high or low energy? What is the dynamic back at home? It’s to get to know them and match them with a pet that suits what their describing.”

During these sessions, counselors will go over a pet’s medical and behavioral history and the adoption contract. While adoption counselors have questions for people coming in, Bricker said prospective counselors also have their own questions to ask to find out more information on the animals at the shelter.

“Common questions include ‘is this puppy potty trained?’ or ‘is this animal purebred?’ and we try to answer as best as we can,” Bricker said. “In all our answers we want to make sure these people understand that adopting an animal is a life-long commitment. This isn’t a stuffed animal or something they can easily dispose of after the first time it pees on the carpet or messes up the house. They need patience and care to be a pet owner and we let them know what they need to do to set them up for success.”

Misconception Bricker says he sees are people expecting to be denied an adoption if they don’t have a backyard for the dog to run around in or if they’ve never owned a pet before.

“We always provide them with the resources they need to become great owners such as how to dog proof the house, how to crate and potty train an animal and how to walk them,” Bricker said. “We’ve only turned them away if they’ve lied in their application or appear in the society’s don’t adopt to list which is composed by reports and phone calls made by concerned citizens and animal control officers.”

Bricker said that most adoptees pay only a $25 deposit to spay or neuter an animal and other fees are usually waived.

“No matter how nice our shelter is, it’s nothing compared to a home,” Bricker said. “So our goal is to get them out of a shelter and into a home. We make it as easy as possible while making the right decision for an animal.”

To adopt an animal, visit any of Palm Valley Animal Society’s three locations at 2501 W. Trenton Rd., 2451 N Expwy 281, both in Edinburg, and at its McAllen location open exclusively on weekends through January at 302 S. Broadway. PVAS’ Edinburg locations will be open every day year-round, Bricker said.

“We’re here every day taking care of the animals and animal control department still gives us animals on Christmas so we should still be here to ensure they go home,” Bricker explained.