Awards are a big part of the sports world. They can be for a variety of achievements like most valuable player or newcomer of the year. Some sports awards are specific in what they honor. Professional baseball awards the Gold Glove to players who excel at defense. The NBA has a Sixth Man award to recognize a non-starter who, throughout the season, made the most significant contributions to their team coming off the bench. After watching the La Joya Coyotes defeat Sharyland High Tuesday night in a non-district match-up of Big 7 boys basketball teams it may be time for a new one; The Second Team award.

Trailing midway through the first quarter La Joya coach Eric Montalvo replaced his starters with five bench players and their impact was the difference in the eventual 55-39 victory that improved the Coyotes to 9-7 on the season. 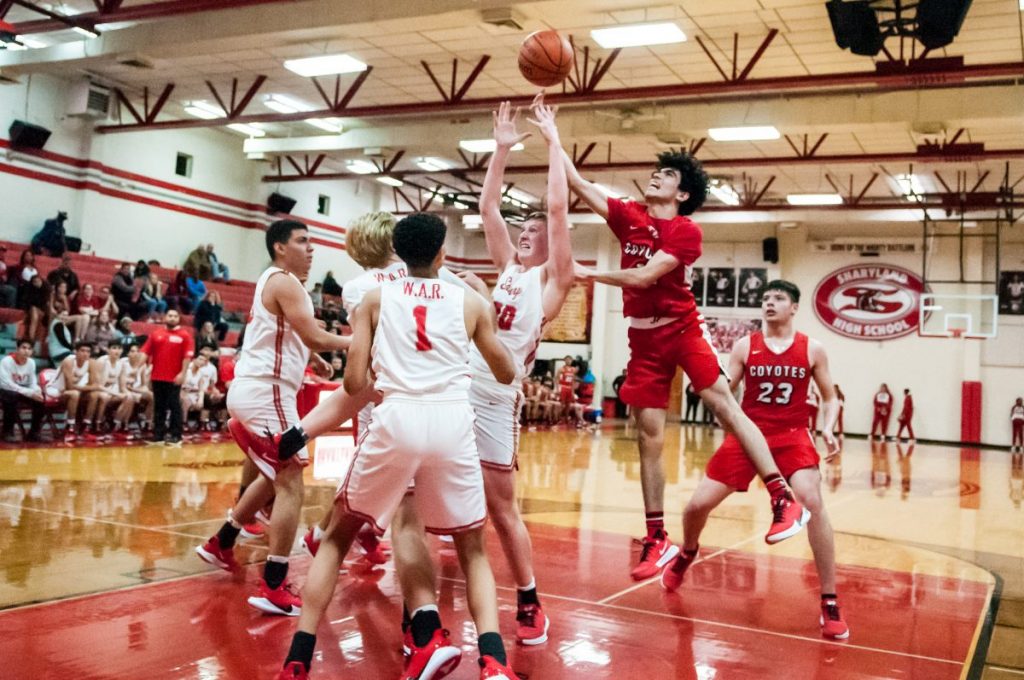 Sharyland’s Caleb Combs and La Joya’s Mikey Saenz battle for a rebound during the second quarter of the Coyotes’ 55-39 non-district game win over the Rattlers Tuesday night.
Progress Times photo by Luciano Guerra.

“Every man needs to be ready,” said Montalvo. “Today we started off a little slow and came in with the second group and they were ready to play. They gave us a big burst.”

In an impressive run, the Coyotes reserves outscored the Rattlers 12-0 over the last half of the first quarter to turn an early 7-6 deficit into an 18-7 lead. It was a lead the Coyotes would never relinquish.

It is hard to say what stood out most about the effort. Four different players scored for the Coyotes to close out the quarter. Defensively they kept the Rattlers at bay. A Bernie Vera basket gave La Joya an 8-7 lead and baskets from Juan Trujillo and Zeke Garcia extended it to eight. The run was punctuated by a half court buzzer beater from Cesar Villarreal to end the quarter.

“I work on those every day,” joked Villarreal. “It was a good momentum booster for the first half and gave us good energy for the second.”

The second quarter saw the lead extended by as much as 18 points on four points from Vera, another Villarreal three pointer and a basket from Mikey Saenz, another Coyote reserve.  By halftime the Coyotes bench had contributed 23 points to send La Joya into the locker room with a 29-15 lead.

Defense was a big part of the victory too. Throughout the night the Coyotes switched from pressing to zone to man-to-man to force the Rattlers into tough shots and then rebound then when they missed.

“We knew it was going to be tough,” said Montalvo. “We wanted to really focus on #3 (Sharyland guard Naz Moore). Last year he went to our place and really beat us down. That was our main focus coming in; make him take tough shots as much as possible. They did a good job tonight.”

Moore was held to seven points on the night.

Montalvo also talked about the rebounding effort. “We emphasize it; we kind of over emphasize it. We are always trying to crash the boards on offense and defense, pursue every basketball as much as possible.”

Vera was a presence at both ends of the floor, leading all scorers with 13 points on the night and hauling in eight rebounds. He spoke about his role coming off the bench.

“Just get every rebound, every loose ball, everything I can do for the team,” said Vera.

Villarreal had a similar mindset. “My role is just to get in there, give good energy, defense, and score whenever I can.” Villarreal finished the night with 11 points.

The formula worked for Vera and Villarreal as well as the rest of the reserves. On the night the Coyotes bench outscored the starters 37 to 18.

Sharyland came out for the second half with a much better effort and better results, outscoring the Coyotes 18-16 in the third behind seven points from Josh Ramirez. It seemed, however, that every time the Rattlers made a push the Coyotes had an answer. Starter Santiago Rodriguez contributed six points in the quarter and Villarreal added five to prevent Sharyland from closing the gap. Caleb Combs led the Rattlers with eight points on the night.

Sharyland coach Danny Moran talked about his teams overall game. “In the first half we were just getting beat up on the boards but in the second half we battled,” he said. “We just couldn’t cut that 14 to 12 point lead.” The loss dropped the Rattlers to 3-9 on the season.

Both teams have several games left before beginning district play on January 3. La Joya is participating in a tournament in McAllen that began yesterday while the Rattlers are scheduled to host McAllen Memorial tonight at 7:30 pm.