New years bring more time for growth, at both the public and private levels.

2019 included several stories from the Progress Times that we are proud to have brought our readership. Thanks to you, we are able to reflect on last year as we embark on 2020.

Below are some of the highlights of 2019 that we felt encompass the ever-evolving area we find ourselves in, and the true exemplifications of the culture and people making our community unique.

Changes in Mission Landscape and Leadership 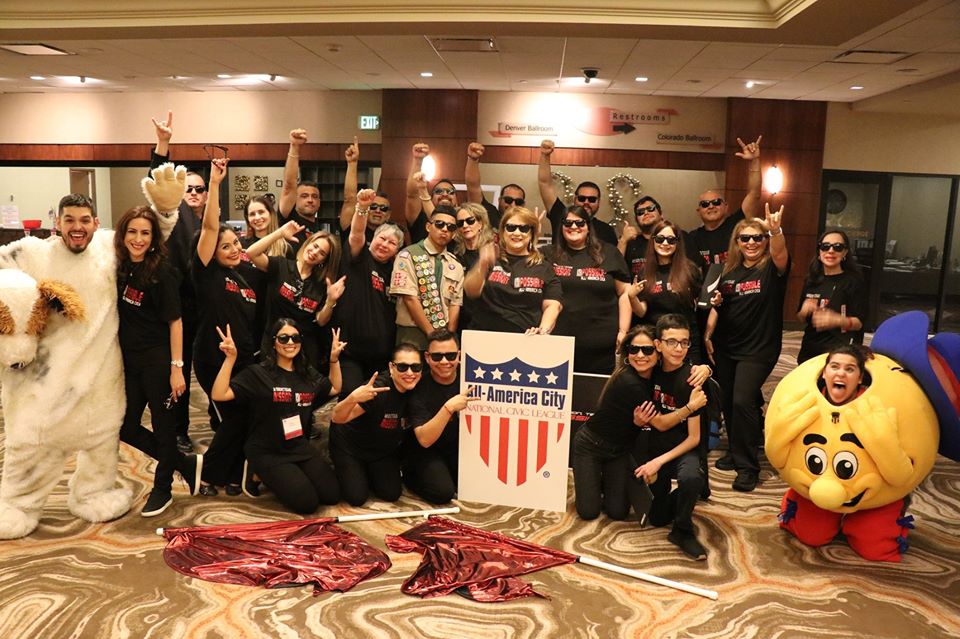 The city of Mission underwent several changes in leadership, and grew with several additions and events that drew people in.

New activities and events entered the schedule, including the city’s first Mission Arts Festival, the incorporation of pickleball in the Parks & Recreation spring lineup, market days and pet fairs. The Boys & Girls Club got a new director (J.J Guerrero), and the organization opened their newly expanded Bannworth Park location, now complete with classrooms and office space.

It was the year of workshops in the city of Mission. The mayor, council and city manager met often to discuss the city’s budget, tax rate and major projects. The tax rate was raised by 3.5 cents, and Mission continues to mull over the Madero Bridge project as they confirmed new roofs for the Speer Memorial Library and the Mission Historical Museum.

2019 was also the year Mission was declared an All-America City – one of ten cities in the nation to earn the annual distinction. 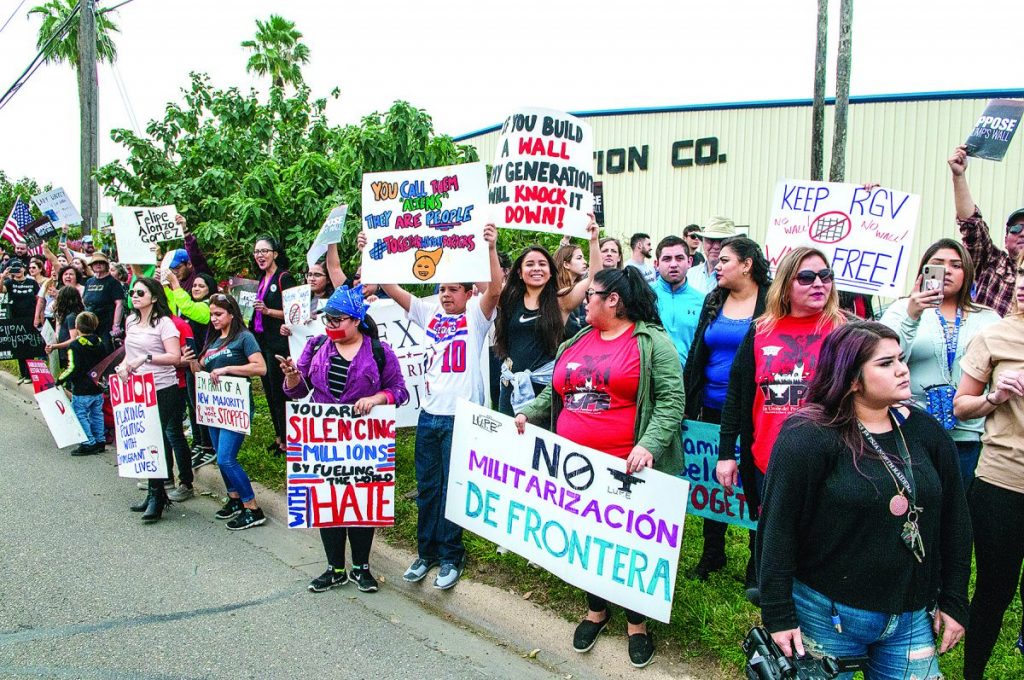 2019 brought several protests, exhibitions and visitors to the RGV border as the national controversy known as the border wall swelled locally and nationally.

We covered President Donald Trump’s visit to the border (met with protestors and supporters alike), and wrote about his declaration of national emergency that sparked protests. The National Butterfly Center became an environmental and artistic landscape for those against the Border Wall, and protestors advocated for the historic landmarks and native species inhabiting its potential path.

Local veteran landowners faced land surveys from the Border Patrol, and national reimbursement funding was granted to local governments and non-profit organizations responding to the humanitarian crisis as migrants flock through the RGV.

Major dignitaries visited respite and detention centers, as well as the border wall in construction along the RGV sector of the United States border.

The city of La Joya held some major elections this year, the campaigns and buildup of which led to several stories regarding the council, city staff and the Housing Authority.

Auditors found evidence of political favors and suspicious financial transactions in the Housing Authority, and suspicious land deals in the city of La Joya. Throughout the saga officials communicated and fought via text message and Facebook profiles.

The Housing Authority director was replaced, then a board member was charged with bribery.

Director Ruben Villarreal took over, and a food pantry was opened. The U.S. Dept. of Housing and Urban Development asked them to fix management and financial issues, and the board agreed. 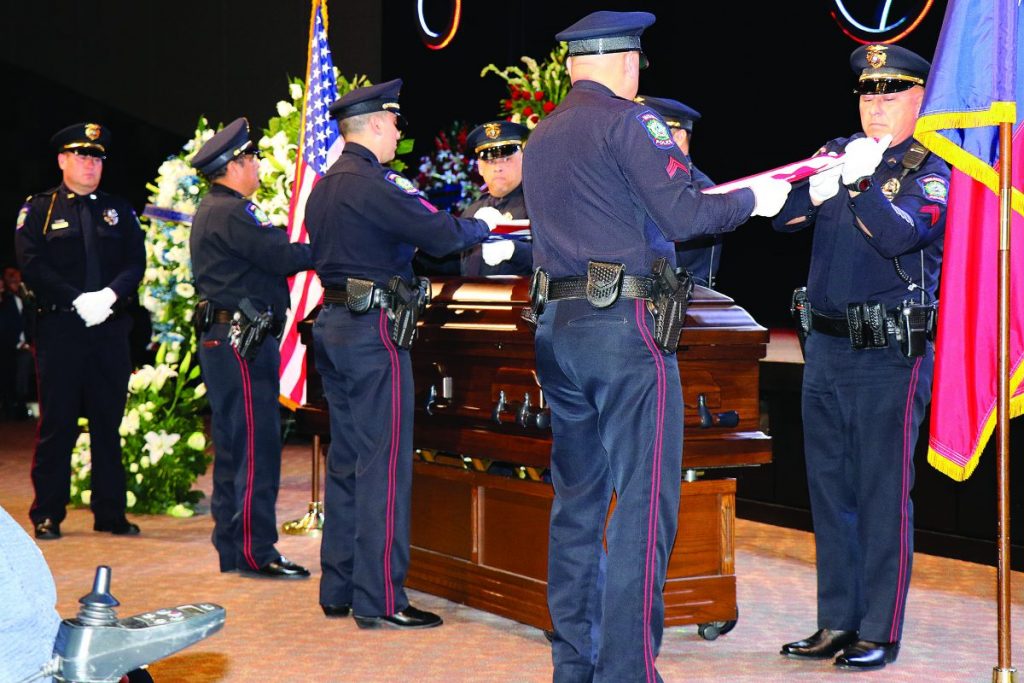 Hidalgo County lost two law enforcement officials in the line of duty last year, sparking Valley-wide mourning and a renewed sense of the sacrifices made for residents on a daily basis. Support for their families was overwhelming, and stemmed from empathetic and sympathetic parties grateful for their fallen loved ones.

DPS Trooper Moises Sanchez was shot on April 6 while responding to a car crash. He was left in critical condition, and had a few more months with his family before passing away.

The city of Edinburg mourned, and renamed a street after Sanchez.

Two weeks later, a benefit concert was held to raise money for his wife and children.

On June 20, Mission Patrol Corporal José Luis “Speedy” Espericueta was shot and killed in the line of duty. He also left behind a wife and two children.

Several events were held in Mission in Speedy’s honor, and his family was supported by not only the entire PD, but the community as a whole. His funeral, packed with family, community and officers from across the country, was held June 25 at Palm Valley Church, where Speedy and his family worshipped every Sunday.

Oct. 4 (his birthday) was declared Jose Luis “Speedy” Espericueta Jr. Day in Mission. The city also renamed a street in his honor and celebrated his legacy at the annual National Night Out. Sister cities in Mexico gave their condolences for Speedy, building an ornate altar for him at the Mission Historical Museum’s Noche de Calacas for Dia de los Muertos. 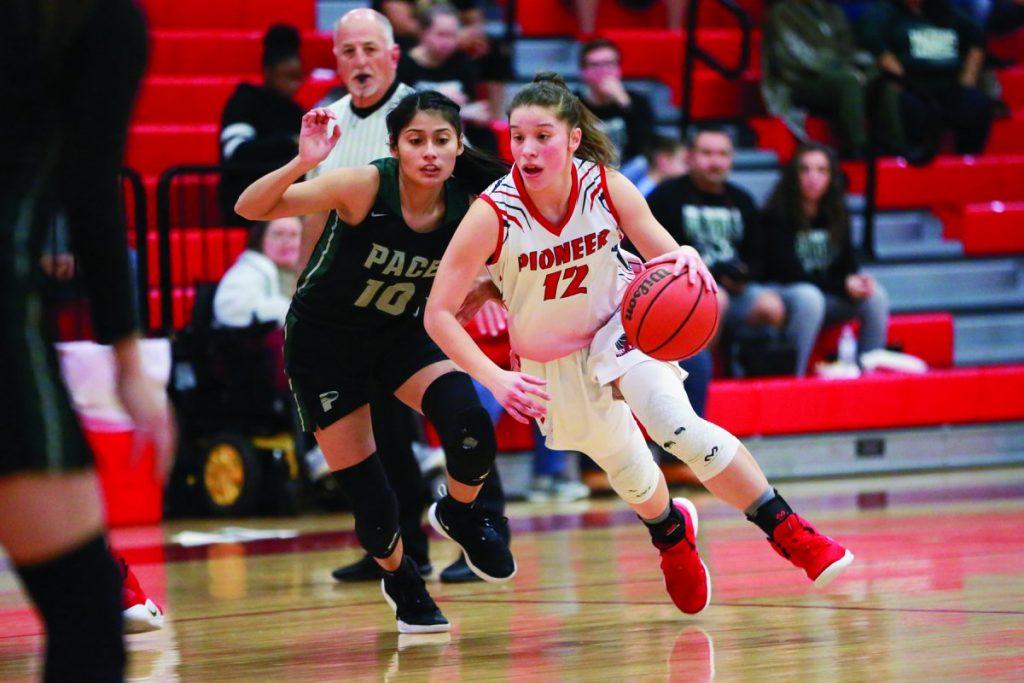 It was a banner year for athletics in the Sharyland, Mission and La Joya school districts. The Big Seven high schools set new records and brought their A-game every week. While all the districts left their everything on the field, Pioneer High School dominated in several sports, making it into the top and reaching the semi-finals before a tight game that they took into overtime.

In the spring we watched as Big 7 athletes strode further than ever before in track, powerlifting, soccer, wrestling, golf, softball and baseball.

In the fall, Big 7 football, volleyball, cross country and tennis was featured strongly as athletes pushed the limits and kept their teams competing throughout their seasons.

We documented dozens of students athletes in the Mission, Sharyland and La Joya school districts who signed letters of intent to compete at the collegiate level, often earning large scholarships because of their dedication on the field and in the classroom.

United States military veterans were featured prominently in 2019, and the area brought them to the forefront with special events, a new Veterans Day parade (and weekend of events), ceremonies and funerals for unaccompanied veterans.

The city of Mission started a historic new tradition with a weekend-long celebration of Veterans Day that included a parade and several cook-offs. The events drew families of all shapes and sizes, and highlighted the need for community spirit and camaraderie.

Veterans Day events were held in cities and school districts across the county, and veterans and citizens alike honored the sacrifices made by those who serve. We were there to capture the moments of community support, and wrote about the importance of seeking assistant services.

A free home was constructed and given to a marine corporal and his family in McAllen.

The Progress Times also published feature pieces about the life experiences of veterans who served during World War II and in the Vietnam era. We aim to continue our documentation of history through the eyes of invaluable primary resources.

Donors wrote large checks for both parties, and the election swelled before Lopez, Flores and Loya ultimately kept their seats in the city of Peñitas. 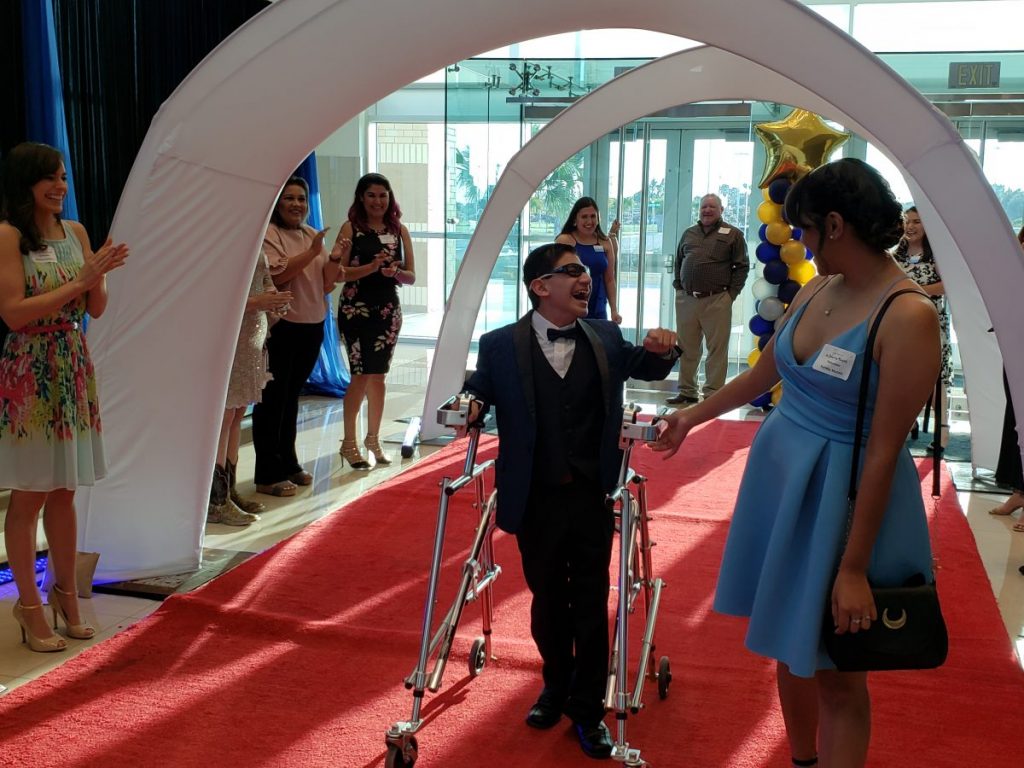 La Joya ISD held two Special Needs Family Nights at the Aquatic Center in the summer months, which grew in size as over 600 attendees gathered for an evening. Students with special needs from across the Rio Grande Valley were invited, along with their families, to a handicap-accessible water park complete with a lazy river, water slides, pools and a splash pad.

A prom organized by the Capable Kids Foundation was held at the Mission Event Center, and students with special needs got to experience a Starry Night of dancing. There, they were able to make friends, and had the spotlight shine on them as they entered on a red carpet.

We were there when Hidalgo County opened its first all-inclusive outdoor park, which is accessible for any and all who did not have complete access to a park until now. It features accessible swings, gliders, merry-go-rounds, sensory walls, roller slides and a splash pad all designed specifically for children with special needs.

A new tradition was born that aimed to celebrate the public service provided by man’s best friend. Mission and Palmview honored the canines in blue who passed away this year with memorial services that highlighted their legacy in the police departments.

K9 Officer Cezar, a long-coat German Shepherd who served his partner Officer Alexandria Leal and the Mission PD, passed away. The city held a special memorial in his honor, and Leal was able to speak about his legacy as K9 officers from across the county saluted him one last time.

K9 Officer A’zeus, a Belgian Malinois who served his partner Corporal Cosme A. Muñiz III and the Palmview PD, passed away. As they did with Cezar, K9 officers saluted A’zeus’ ashes one by one as Muñiz said the hardest day in his career of law enforcement was the day A’zeus passed.

2019 included the aftermath of the Mission mayoral election between councilman-turned-Mayor Mayor Armando O’caña and former Mayor of two decades Norberto Salinas. Salinas’ resulting lawsuit alleging voter fraud (among other things) brought cries of both support and dismissal from the public as the overall impact of the lawsuit wound down.

O’caña spent over $57,000 in legal fees. The 13th Court of Appeals sided with O’caña, reversing the ruling of District Judge J. Bonner Dorsey. They denied the contest suit, and Salinas took the case to the Texas Supreme Court.

Salinas asked them to review the election, and the court set due dates for all briefs were set in October. On Dec. 13 Texas Supreme Court said they would not review the 2018 Mission mayoral election, but attorneys for Salinas may file a motion for rehearing.

LJISD, MCISD and SISD succeeded several times over as they shifted from one school year to the next, and made efforts to give back to the populous that they serve.

The Texas Education Agency gave several high distinctions to La Joya, Mission and Sharyland in 2019. Mission and La Joya also earned achievements as they each had a campus named as a National Blue Ribbon School, earning major recognition in South Texas.

La Joya and Mission also designated specific campuses at the elementary level with focuses in Science, Technology, Engineering and Mathematics and Fine Arts.

Mission became a District of Innovation, and memorialized the students who passed away on the 30th anniversary of the infamous Alton Bus Crash.

All three districts took wins at the Pigskin Band competition, and took their musical talents to new volumes with colorful and movement-driven performances. Mission and La Joya’s respective Back to School Bashes provided countless students with school supplies, backpacks, haircuts and information just in time for the new school year.

The Progress Times website recently underwent some cosmetic changes. Our content offered in it is the same, but you’ll find a more streamlined interface that is story- and advertiser-friendly.

We are also starting to offer an online edition of our paper if you are a subscriber, and you will be able to access the latest news a day earlier than everyone else.

If you would like to subscribe online it can be done by clicking on “Subscribe” under the “Contact Us” tab at the top of our home page. You’ll find five packages you can choose from.

You can also choose our online-only subscription, which costs only $5 per month. Our rates for current subscribers will not change moving forward.

We at the Progress Times consider ourselves part of what keeps you informed about the latest happenings in our communities. Becoming a subscriber shows your dedication to making some sort of impact that comes from the power of information.

Our doors are always open to you, as we rely on you to continue to learn and grow ourselves. We are open to tips and story ideas, which can be sent to info@progresstimes.net, and can be reached during our office hours at (956) 585-4893.