Senior Christian Martinez had his college plans set before the end of the fall semester.

Martinez, a senior at Juarez-Lincoln High School in the La Joya Independent School District, received word in December that he received a full-ride to Yale University, a private Ivy League school in Connecticut. The scholarship will cover all he needs to live and study there, along with travel expenses. 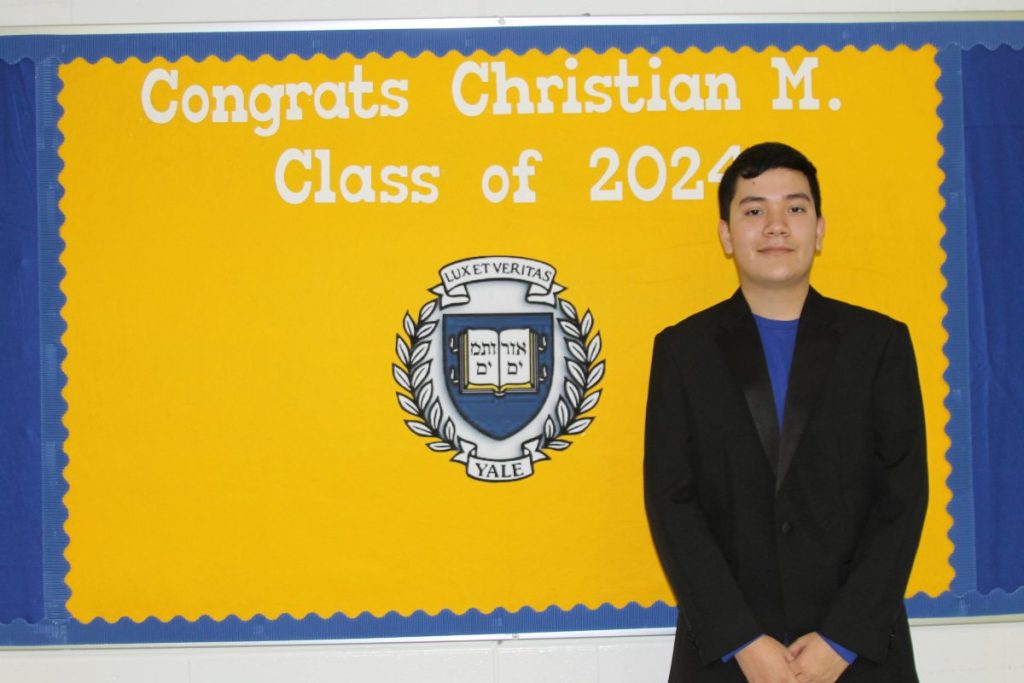 Christian Martinez, a senior at Palmview High School, stands by a display in his honor the day after finding out he received a full ride to Yale University.Progress Times photo by Jamie Treviño.

“It’s something that I really need, coming from this background,” Martinez said. “We usually don’t have the money to go to these kinds of schools with high tuition prices, so having that opportunity is not something I’m going to take for granted.”

Juarez-Lincoln Principal Ricardo Estrada said everyone at the school was proud of Martinez and his accomplishments.

Santos Palomo, the STEM (Science, Technology, Engineering and Mathematics) Academy Director at Juarez-Lincoln, said Martinez was an example for STEM students throughout the district.

“He’s a very determined and self-directed, and ambitious in the manner that he knows where he wants to go, he’s set on that end goal and nothing is going to stray him from that,” Palomo said. “There’s no doubt in my mind that he’s going to be the astronomer he wants to be.”

During class in December, the email letting him know of his prospects arrived via the scholarship portal he applied through.

“I found out in the middle of class, so I was really excited but I couldn’t really show that emotion as I wanted to,” Martinez said. “Obviously, in the moment I couldn’t believe it actually happened, that I got accepted by my first choice.”

Martinez is planning on studying astrophysics and astronomy.

“I’ve always loved space,” Martinez said. “Physics is founded on math, and I’ve always loved math and am pretty good at it, so being able to apply it to something greater than that really drives me to want to study it.”

His current goals include pursuing his Ph.D. (doctoral degree) and being able to conduct research for the university.

“I really like astrophysics and the concepts of it,” Martinez said. “Yale provides many opportunities for research as undergrads, so I just really want to be able to contribute to the field.”

Martinez earned his ride from the QuestBridge Scholarship program, in which recipients are granted a full, four-year scholarship with one of the program’s college partners.

Because his family had difficulties financially, growing up Martinez kept that on his mind as a motivator to achieve academic success.

“I feel like I need to do something to sort of give back for what they’ve done for me to get to this point,” Martinez said. “Both my siblings have excelled in school, and we’ve always been really involved in academics.”

Martinez is currently the president of the school’s National Honors Society chapter, participates in the orchestra and competes in the University Interscholastic League’s (UIL) Number Sense, Mathematics and Computer Science.

“There’s two major categories to which I attribute my success: the first one is my family, they’ve done so much to support me in getting to this point,” Martinez said. “Also, the community around me – a lot of them have supported me to get where I’m at, and I want to give something for them to be proud of: this is what can come out of a place like this.”

If Martinez could give any advice to freshmen entering high school, it would be to not sweat the small stuff.

“Don’t stress the little things, as I did for a pretty long time,” Martinez said. “I realized that I’m going to be okay, but back then that never clicked.”

“If people really want something, all they have to do is try,” Martinez added. “There’s really nothing that’s stopping us from achieving these dreams. If you really want it, just try, and we’ll surprise ourselves in the process.”