A quartet of basketball teams, each with playoff aspirations, squared off at Mission Veterans Memorial High School in Mission this past Tuesday night in a pair of UIL District 31-5A games.

All of the schools in the Big 7, whether in District 31-5A or District 30-6A, are currently playing their games in a double-header format with the girls playing first, followed by the boys. 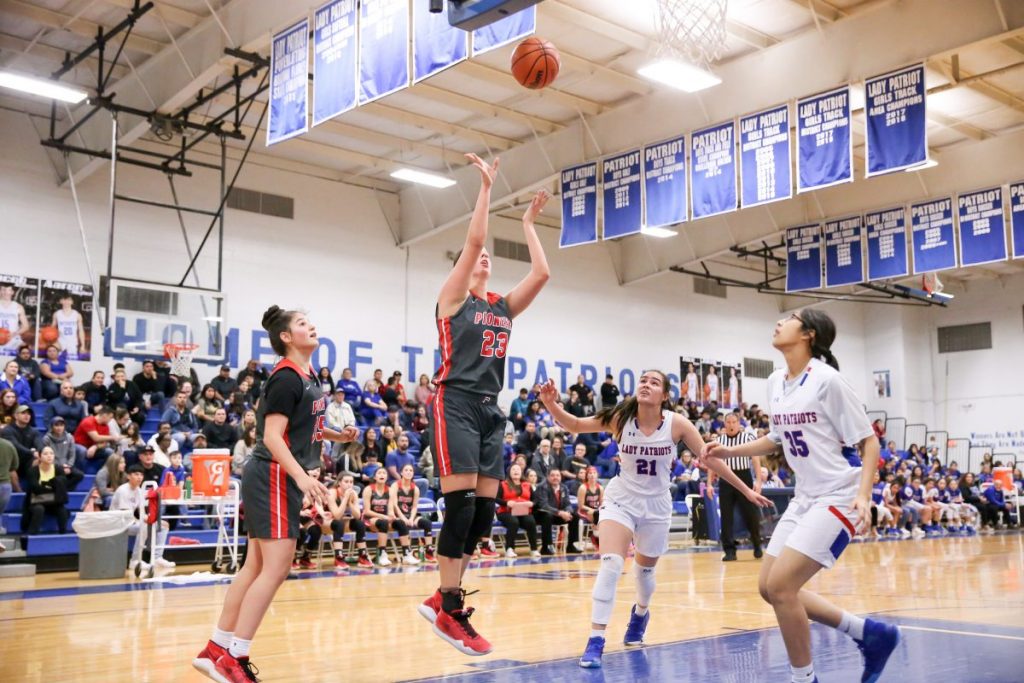 The Lady Diamondbacks trailed by seven at halftime but outscored the Lady Patriots 12-2 in the third quarter to turn their fortunes around in a 52-43 win and improve to 4-0 in district Tuesday, Jan. 7, 2020. Progress Times photo by Mario Magallon.

The match-ups at Mission Veterans this past Tuesday pitted the Lady Patriots and Patriots against teams from Sharyland Pioneer. Each of the four teams made the playoffs last season and each came in having solid starts to the 2019-2020 district portions of their schedules.

Both games went to Sharyland Pioneer in comeback efforts.

In the boys’ game, the Diamondbacks trailed by nine early in the fourth quarter before using a big run late to beat the Patriots 69-59 and improve to 2-0 in district play. The Patriots fell to 1-1 with the defeat.

Neither game, however, started off like the back and forth, high intensity affairs that each would become.

Defense and a pair of big efforts turned the game back in favor of Pioneer in the third. Adelaida Arroyo scored eight points in the quarter, including a three pointer that gave the Lady Diamondbacks the lead. Arroyo led the team with 11 points on the night. Carly Hornaday contributed five rebounds, two points, two assists and a blocked shot, as Pioneer outscored Veterans 12-2 in the period, taking a 35-32 lead going into the fourth.

Pioneer got seven points from Priscilla Garza, two Hornaday baskets and some good free throw shooting in the final quarter to secure the win.

Hornaday and Arroyo spoke about their big third quarters.

“The first and second quarters weren’t really my quarters so I knew I had to step it up and play my game,” said Hornaday.

Arroyo credited others for her big quarter. “My teammates did a good job of finding the open looks, were able to get me the ball and I was hot.”

Lady Diamondbacks coach Nicole Villarreal was pleased with how her team responded to the big first half run by the Lady Patriots.

“I think that (the run) kind of rattled us a little bit,” said Villarreal. “Our talk (at the half) was just about getting in there and playing our game; being patient on the offensive side, being aggressive on the defensive side, controlling the boards a bit more. It was just really about getting our heads right.”

The Pioneer victory on the evening overshadowed a big night from Cantu, the Lady Patriots guard, who led all scorers with 25 points.

It was a game of both and good and bad for Veterans. Lady Patriots coach Ralph Cantu Jr. spoke about both. “The good was about halfway through the first (quarter) to the half. We played really, really great basketball. I told the girls at halftime we have to come out in the third quarter like we ended the half. Unfortunately we came out a little flat.” 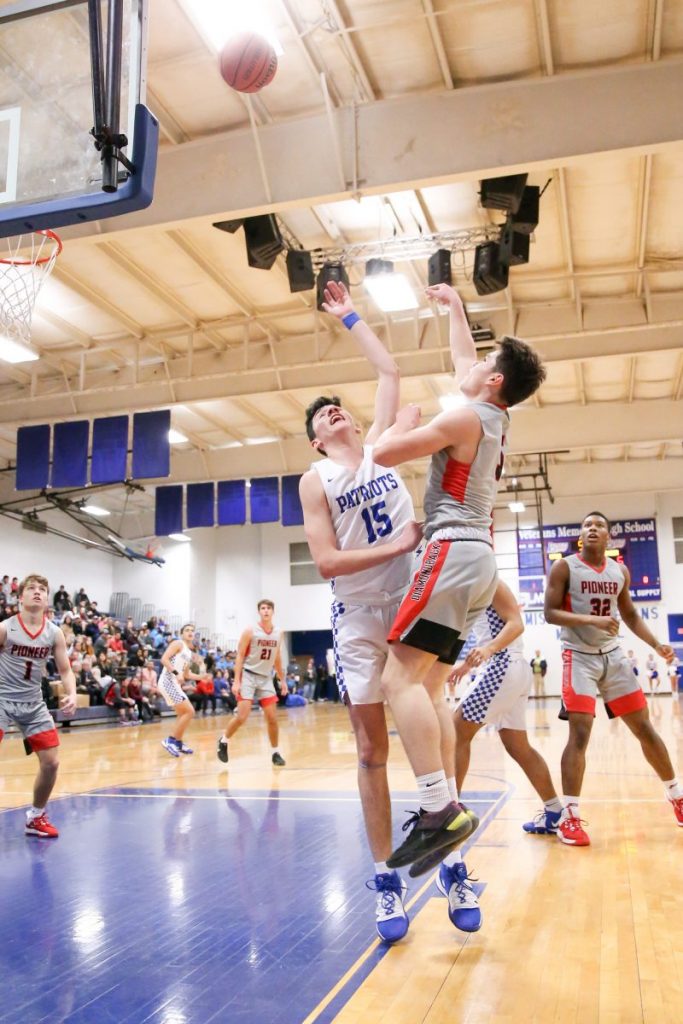 The Diamondbacks trailed by nine early in the fourth quarter before using a 24-3 run to beat the Patriots 69-59 and improve to 2-0 in district play Tuesday, Jan. 7, 2020. Progress Times photo by Mario Magallon.

Much of the same could be said for the second game of the night as well. The Diamondbacks raced out to a 21-8 first quarter lead behind 10 points from Derek Luna before the Patriots put up 29 second quarter points to take a 37-34 lead at the half. Three baskets from Michael Gonzaque early in the second got the Patriots back into the game and Ryan Acevedo and Jacob Marquez added six points each in the quarter to aid the comeback effort.

The Patriots stretched their lead to nine in the third and once again early in the fourth but were outdone by a huge 19 -0 run by the Diamondbacks over the last four minutes of the game that allowed the visitors to win it. Miguel Angel Gonzalez started the comeback with a three pointer and followed it up a short time later with a lay-up and a free throw to complete a three point play that put Pioneer in front for good. Four other Diamondbacks contributed points during the run along with a stingy defense that held the Patriots to just six fourth quarter points.

Luna, who led all scorers with 28 points on the night, was a steady presence throughout. After his 10 points in the first quarter, Luna contributed five more in the second, six in the third and seven in the fourth to keep the Diamondbacks within striking distance. He spoke about the big run at the end of the game that allowed the comeback. “It started with the defense first,” he said. “We started playing good defense; boxing out and rebounding and it led to offense.”

Diamondbacks coach Rene Gonzalez credited his team’s defense too. “That fourth quarter was huge for us,” he said. “We were hollering about defense, defense, defense. I told them we needed to shut them down. They (the team) did what they needed to do.”

Patriots coach Jose Ramos remained positive after the loss, pleased with how his team matched up with the Diamondbacks for most of the night. “The guys were ready to play,” he said. “We preach here that if you play with energy, effort and excitement you’re going to give yourself a chance to win every game. That was our mentality coming into this game.”

All four teams are back in action tonight with Mission Veterans travelling to Sharyland High and Pioneer playing host to PSJA Memorial. The girls’ games are scheduled to start at 6 pm with the boys tipping off at 7:30 pm.