Sharyland Pioneer quarterback Eddie Lee Marburger had quite a season. Not only did he lead the Diamondbacks to their first ever undefeated district record, and their first ever district, bi-district and area championships but he did so while completing 286 of 433 pass attempts for 4,505 yards, 58 touchdowns and only five interceptions. While these are all impressive stats, it is his total passing yards that has him sitting atop the state rankings and seventh in the nation among all 5A and 6A quarterbacks!

Furthermore, the fact that the 6-2, 185 lb. junior signal caller compiled all those passing yards, the equivalent of over two and a half miles, in only 13 games while the two quarterbacks directly beneath him in the rankings, Rockwall’s Braedyn Locke (4,305 yards) and Lampasas’ Ace Whitehead (4,259 yards), each played fifteen games, makes his No. 1 state ranking all that more impressive. 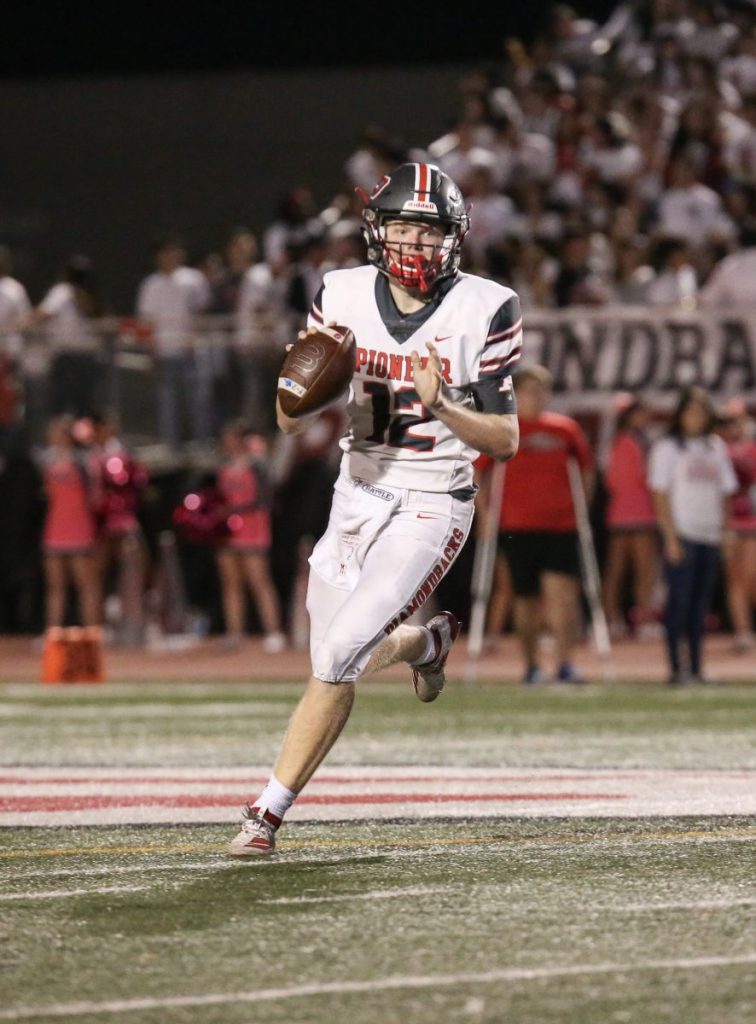 When asked what this accomplishment means to him, Marburger said, “It makes me want to give back to the community, my family and to the people that helped me get to the place that allowed me to have this kind of success. It makes me thankful for my teammates because they do everything for me. They made it super easy for me this season and those guys deserve all the credit, not me.”

“When you watch our receivers you see how talented they are and that makes it so easy for me because if the defense mans up on one guy, that’s where we attack,” Marburger said. “If on the other hand they double-team one guy that leaves four other great receivers wide open. Like I’ve said before, we may have the best receiving crew the Valley’s ever seen.”

How was Marburger able to achieve such an amazing ratio?

“My receivers always found ways to be wide open for me and that made it easy for me to avoid interceptions,” Marburger said. “Also my linemen did a great job of keeping the pressure off me. And my coaching staff did a great job as well; especially Coach (Eddie) Galindo (Diamondbacks’ offensive coordinator and quarterbacks coach).”

The fact that Marburger was sacked only five times in 13 games is a testament to how well the Diamondbacks’ offensive line protected Marburger all season long.

While Marburger’s passing statistics are what some might call “video game stats”, due to the fact that it is much easier to attain such high numbers in a video game than it is on the gridiron, it was just one year ago that another Mission quarterback had extremely similar stats. That of course being Mission Veterans’ Landry Gilpin. How similar? Let’s take a look at both players’ stats with Marburger’s listed first and Gilpin’s second:

Of these seven passing statistics, Marburger bettered or tied Gilpin in all but one category, passing yards. The fact that Gilpin went on to be named Mr. Texas Football, a title given to the state’s most valuable player, is a testament to how incredible a season he had last year. And while it is not at all a reach to say that Marburger had a slightly better season passing the ball this year than Gilpin had last year, Gilpin did more than double Marburger’s rushing totals, 2,112 to 1,009 yards.

When asked if he ever thought he would have a season so comparable in passing stats to the season Gilpin had last year, Marburger said, “I really don’t think about personal stats. I only think about our team’s stats and our team’s success. Not just what I can do.”

Pioneer head football coach and athletic coordinator, Tommy Lee, has had a front row view to Marburger’s emergence as one of the state’s top quarterbacks. Lee also had a front row view of Mission Eagles’ quarterback Lupe Rodriguez who set state and national high school passing records in 1986-87 and 1987-88. That’s because Lee was not only a teammate of Rodriguez’s back then, but he was also one of his receivers during the 1986 season.

Mission had another quarterback set state passing records in the early 90’s when, now Mission Eagles’ head football coach, Koy Detmer, led the Eagles into the state playoffs twice, and as far as the state semifinals in 1990 when he passed for a then state record of 4,829 yards.

Now with Gilpin and Marburger, two other Mission quarterbacks have risen to the top among the state’s elite quarterbacks and have done so in back-to-back seasons.

“The fact that these four quarterbacks are all from Mission, Texas is special,” Lee said. “I don’t know if it’s in the water or in the offensive systems but Coach Gilpin did an unbelievable job with Landry last season. The stats he put up were video game stats. I got to watch him play two games in the playoffs and he is a special kid. He’s going to do some special things at Southwestern University before it’s all said and done.”

“I played with Lupe Rodriguez and we’ve advanced a lot in offense since he played,” added Lee. “The yards he put up in only 12 games were phenomenal. And then there was Koy Detmer. He played after I graduated but he and his dad (Eagles’ head coach Sonny Detmer) came in and took over Mission and never missed a beat. Koy did some unbelievable things throwing the ball. Passing is something we want to do in Mission but you have to have a trigger man and we’ve been blessed here at Pioneer to have had quarterbacks like Jacob Rosales and now Eddie Lee. And with Eddie Lee coming back for his senior season next year, we’re excited about next year.”