Students with the Sharyland school district learned about the origins of the state flower through the eyes of one of the oldest indigenous groups in the state.

Students were introduced to the play “Yana Wana’s Legend of the Bluebonnet,” an original piece co-written by Maria Rocha and Roxanne Schroeder-Arce Wednesday, Dec. 18. The play, according to Sharyland High School Librarian Nicole Cruz, was shown to 5th and 6th grade students from the campus’ feeder schools as they begin to learn about state history in the 4th grade. 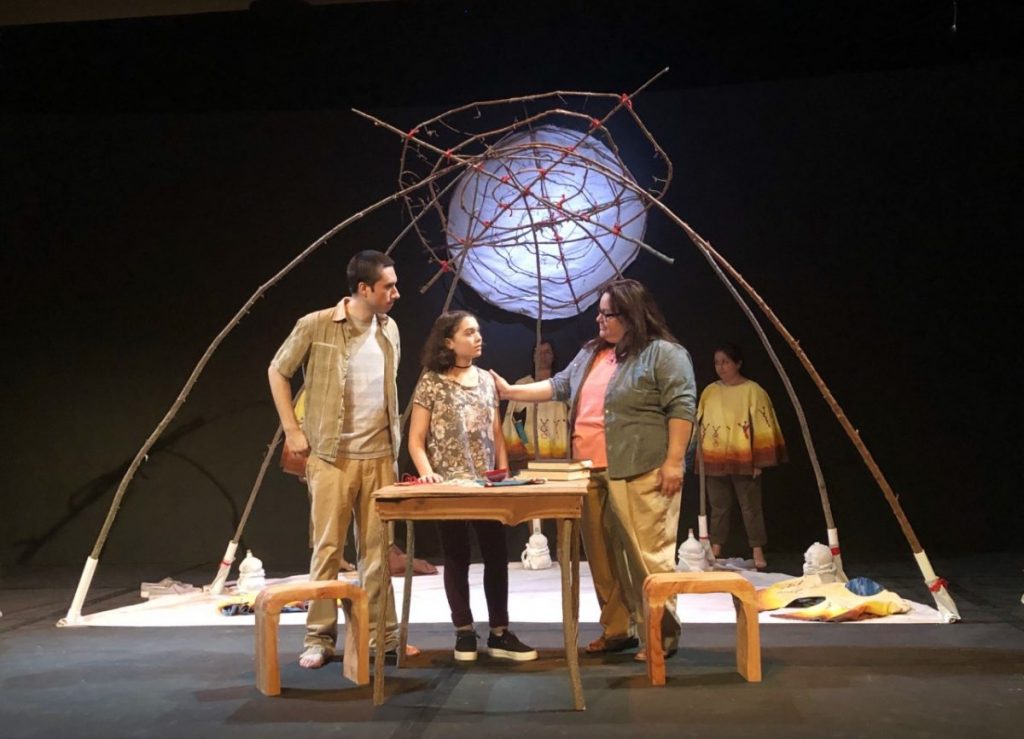 A scene from the play “Yana Wana’s Legend of the Bluebonnet.” Courtesy photo.

“We want to make sure students have a diverse exposure to as many cultures and groups as possible and relate to different people and accept our differences and embrace them,” Cruz said. “The focus of it is a story retold by Native Americans. We invited our feeder elementary schools’ 5th and 6th graders who hear one version of the origin of the bluebonnet and compare it to the one they see today. We want to introduce students to fine arts and theater and feel that a live performance brings a different sense of learning experience.”

The play is set in the present day and centers on a young teenager, Maria, who is sent to stay with her Coahuiltecan grandmother in Laredo after getting in trouble at school. At her grandmother’s, Maria is told an ancient story of young Yana Wana who followed a revered deer to find water and save her people from a prolonged drought. Yana Wana’s perilous journey leads her to the place now known as San Marcos and the discovery of bluebonnets.

Yana Wana’s journey parallels that of Maria who turns to activism to save her grandmother’s community from a drought happening in the area after hearing of Yana Wana’s story.

“There’s an element of young people having  a voice and using their energy for something positive for the community, it’s happening a lot with young people taking action and we hope that message resonates with the young people in Sharyland,” Schroeder-Arce said.

The play was presented at Sharyland High School thanks to a Texas Commission of the Arts grant and was first commissioned and produced by the Dallas Children’s Theater in 2018 and produced by the non-profit Indigenous Cultures Institute and Austin’s Teatro Vivo. Indigenous composer Héctor Martínez-Morales wrote five original songs for the play, sung in the Coahuiltecan language and Mario Ollincoyotl Ramirez choreographed multiple dance sequences.

According to the Teatro Vivo website, there were more than two hundred bands of Coahuiltecans who populated Texas and northern Mexico for more than 13,000 years. They were the first people that the Spaniards encountered when they came to Texas. More commonly known as Mission Indians, these people gradually blended into the Spaniard and then Mexican identity for survival, and eventually became the majority of Texas citizens now known as Hispanics and Latinos.

Rocha said she saw the need for authentic representation of, and stories about the heritage of Texas students historically misidentified as Hispanic or Latino.

“The majority of Hispanic students in our public schools are indigenous, but their history has been erased and they are unaware of the stories of their ancient ancestors,” Rocha said. “The play is for students who aren’t aware they have a Native American identity that was wiped out from persecution generations ago. It’s becoming a national issue.”

“Yana Wana’s Legend of the Bluebonnet” is ultimately about the importance of participating in one’s community, Rocha said.

“So Maria knowing she came from this legacy of people who were stewards of Mother Earth helped her gain self-respect and a sense of responsibility for not just her community but the world,” Rocha explained. “This Coahuiltecan play is special because it’s the first of its kind that we have on record.  It’s the first play ever written about the Coahuiltecan people which were the original Texan Indians, it’s why it’s a historic play and tour. Very seldom do we have control of our own stories and how they’re told. This play is our voice. We’ve done the show in Austin, Wimberly and Killeen and have had students write to us about the impact this made to them and they will be committed to their community, they’re getting the message.”