A new face joined the Agua Special Utility District Monday after former director Roger Hernandez officially stepped down from the board.

Franco Lopez, 35, was sworn in by state Senator Juan “Chuy” Hinojosa after Hernandez stepped down to serve in the La Joya City Council. 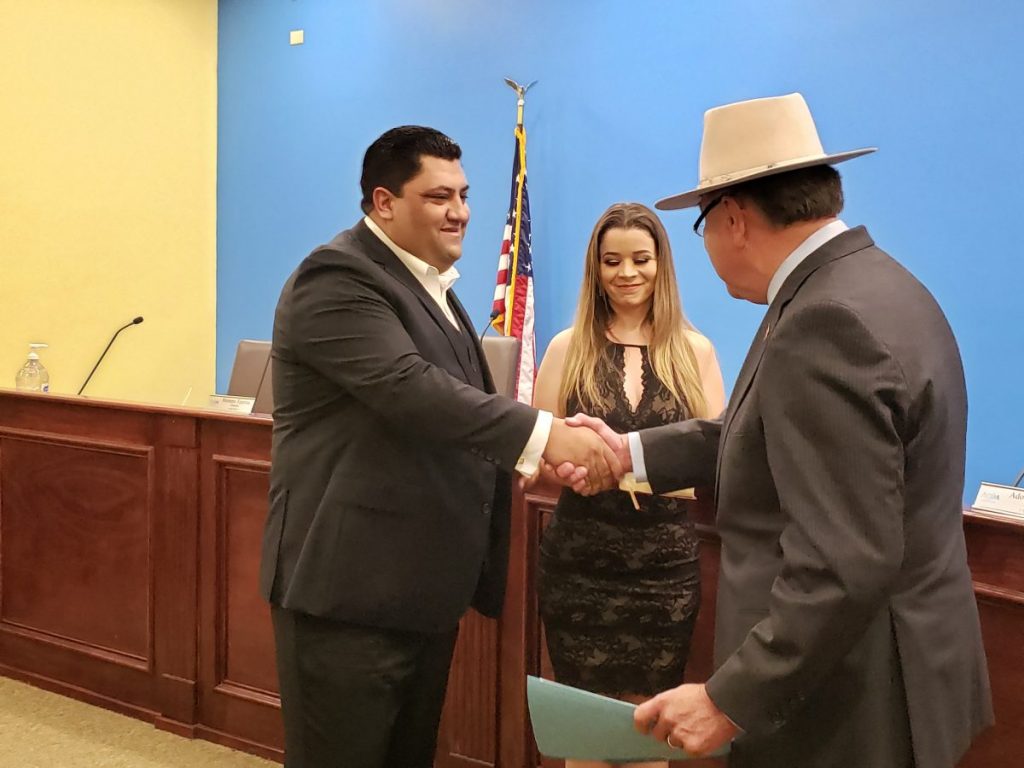 Franco Lopez (left) being sworn in as on the Agua SUD board of directors by state Senator Juan “Chuy” Hinojosa Monday, January 13, 2020. Progress Times photo by Jose De Leon III

“I want to see what I can do for the people north of the county and bring more water to them,” Lopez said. “I’m just here for the people and hopefully do right by them.”

Lopez, who works for the La Joya school district’s transportation department, is the cousin of Peñitas Mayor Rodrigo “Rigo” Lopez. Agua SUD President Lloyd Loya described Lopez as a man who has been involved in the political scene for a while now.

“He’s a local, a rate payer and has been around the political scene and I think it’s his time to do his due diligence,” Loya said. “I know he donates to a lot of events and it was his time. He’s been waiting for an opportunity like this.”

Lopez’s swearing in comes after the utility district’s new single member district went into effect at the end of the 2019 calendar year. As previously reported last month, state lawmakers passed Senate Bill 2552, which replaced the city and county-based seats with single-member districts and required each member of the board to represent a sub-district containing “one-seventh of the total number of residents in the district.”

Lopez will serve as the director for District 3, a stretch of unincorporated land north of Palmview which serves 8,100 people. District 3, along with Districts 1 and 2, will appear on the May 2020 ballot.

Lopez said Monday he is not sure if he will seek reelection for his seat.

“I’m going to be here for now and see what happens.” Lopez said.