Their high school volleyball careers may have ended over two months ago, but for Bella Dominguez and Kassandra Lerma of the Mission Veterans Lady Patriots, the post season honors keep coming. And their most recent accolades have them both being named to the 2019 5A Texas Sports Writers Association’s All-State Volleyball Second Team.

How high of an honor is this? The fact that Dominguez and Lerma are the only two high school volleyball players in the Rio Grande Valley to be named to either the First, Second or Third All State team should leave no doubt as to how exclusive a club this is. 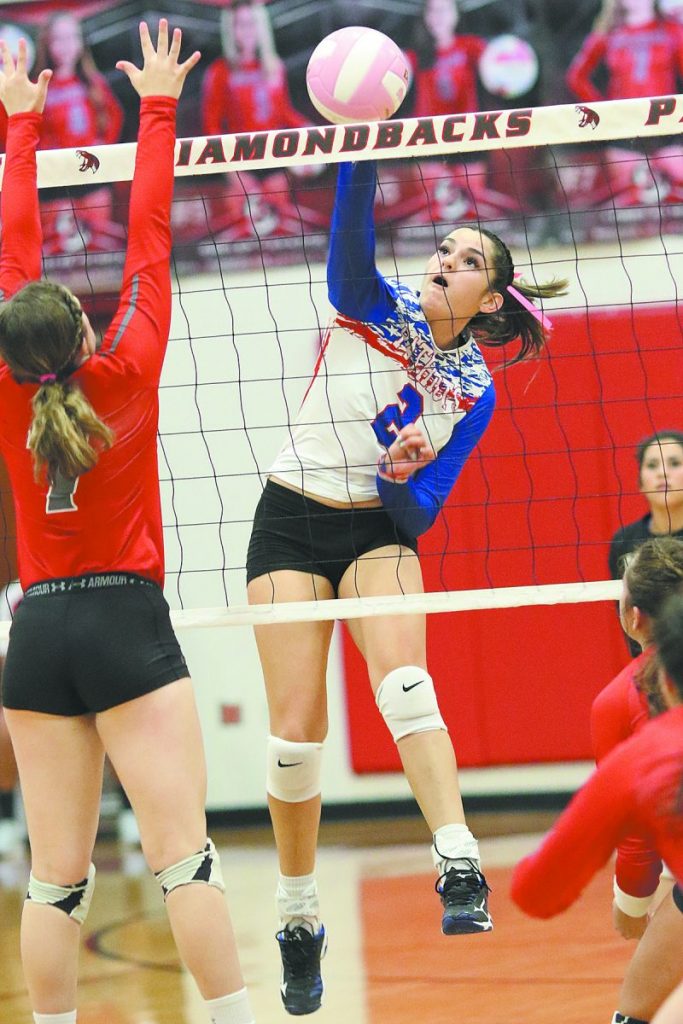 Mission Veterans Lady Patriots’ Kassandra Lerma, who finished her senior season with the third most kills in the nation, prepares to spike the ball against a Pioneer Lady Diamondbacks’ defender. Courtesy photo by Adrian Ibarra

While Lerma has accumulated quite an impressive array of awards and received a veritable plethora of recognition over her four year volleyball career, being named to an All State team is something special to her. Even if she wasn’t sure what it all meant at first.

“When I first heard about it I didn’t really know what to think,” Lerma said. “But then when I told my parents and my sisters, they let me know how big of a deal it was. Being picked for that makes me feel both proud and shocked at the same time. But I’ve worked hard and I’ve given up a lot of my free time to practice, practice, practice, so I am very honored by this.”

Volleyball is in Lerma’s blood. Not only is her mother, Diana Lerma, the head volleyball coach at Mission Veterans, but pretty much every female member of her family has not only grown up playing volleyball, but they have gone on to play at the college level. This includes her older sisters, Sonia and Gabby.

When asked when she began playing volleyball, Lerma said, “I remember being younger and my sisters starting to play but I was too small because the ball was bigger than me. But my Mom was already telling me to pass to the wall, pass to the wall, and she just kept pushing me until I started getting it. And when I started clicking, then she started putting me in games.”

That early start and all her hard work since then have definitely paid off. So much so that even though Lerma has received scholarship offers to play volleyball for Division II schools, she is holding out for a Division I school offer. And why is this?

“All my sisters and I do is talk smack about volleyball,” Lerma said. “We’re always arguing about who is the best. So my plan is to get a Division I scholarship out of my four years so that I can finally say, ‘See? I’m the best.’”

Whether or not Lerma will get to brag to her sisters about playing for a Division I school is yet to be determined, however there is something that she can brag about already; the fact that she is third in the nation in kills with 862! And not to be outdone, Dominguez is the national leader in digs with 1,157!

With stats like that, it should come as no surprise to anyone that over their four year tenure as members of the Lady Patriots volleyball team, Lerma and Dominguez have been instrumental in leading their team to a perfect 60-0 district record. So while they have both received more than their share of individual honors and recognition, they have all come en-route to achieving the kind of team success that is a testament to their, and their teammates, hard work and dedication. 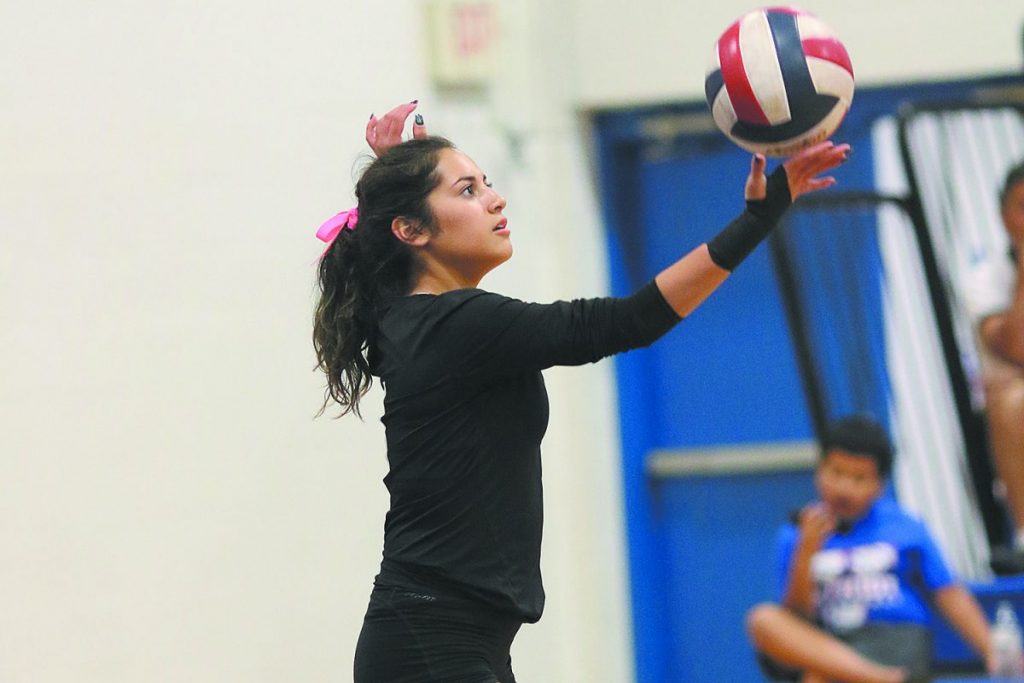 Mission Veterans Lady Patriots’ Bella Dominguez, who finished her senior season with the most digs in the nation, prepares to serve the ball during a game against the Rio Grande City Lady Rattlers. Courtesy photo by Adrian Ibarra

When asked what being named to the All State Second Team means to her, Dominguez said, “It means a lot. I remember when Jackie (Howell) and Mackenzie (Gerlach) were named All State last year, all I could think about was what a big accomplishment that was. So when my Dad sent me a screen shot of my name on the All State Second Team, I thought to myself, ‘Oh wow, I did that.’”

Dominguez, who is already planning on going to school at and playing volleyball for Victoria College in Victoria, Texas, shared what being a member of the Lady Patriots for the past four years has meant to her when she said, “It has meant a lot because coming in here I’ve met some of the friends that I’ve had all four years of high school. I’ve created so many good bonds with my teammates and I’m grateful for the opportunity I’ve had to train and always be competitive.”

As for Coach Lerma, who has been the head volleyball coach at Mission Veterans for 16 ½ of the school’s 18 years, she has seen many of her players receive scholarships and gone on to play at the college level. So while she takes great pride in her players being honored and recognized on the district, area, state and even national levels for their athletic achievements, she takes the most pride when they receive academic honors. And such is the case with two of her players this year; Veronica Cantu who has been named to the All State All Academic Second Team and her daughter Kassandra who received All State All Academic Honorable Mention.