After announcing a new development last month that is expected to bring growth to the city of Mission, officials spent last week gathering input from the most important people in the area: those living in it.

Last month, Killam Development, a Laredo-owned business, announced the purchase of over 3,400 acres in the Mission and McAllen areas. The property will be developed to include residences, entertainment and education facilities in the seven square miles that covers south Mission and McAllen. 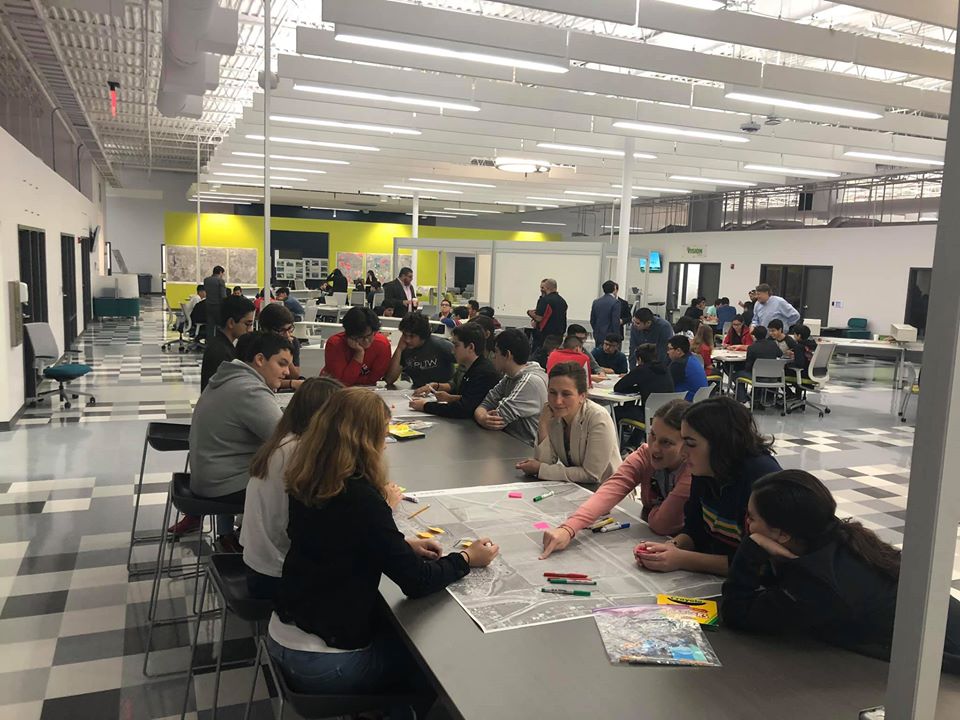 Members of the public during a workshop to provide their input regarding a new development in Mission last week. Courtesy photo.

Due to the nature of this project, the public was invited to a series of workshops last week at the Mission. Center for Education and Economic Development where nearly 400 people and 100 high school students that allowed them to provide officials with their input and aspirations for the incoming development. Officials then released design plans of the property at a ceremony held Friday, Jan. 17 that included input from the public.

“We’re hoping to create a walkable, mixed use community that connects to existing communities and protects what people like about the Valley and enhances it as a destination while adding new places to live, work and play,” Jason King, a representative of Dover Kohl & Partners Town Planning, who are consulting on the development project, said at the Friday ceremony.

At the workshops, members of the public were given a clicker that would be used to get immediate polls of their opinions of the course of the project. Maps of the area were spread out in tables and posted on walls allowing people to fill them in with things they wanted to see in the development.

Besides a Six Flags theme park and museums, the projects that appeared more often on those maps, according to King, included more green spaces, trails and parks.

“Everyone more than agreed on it, they felt there’s a deficit-a need for it,” King said. “They want to get outside but in shaded areas, they want facilities to ride in and feel safe in. Parks were definitely the number one most requested thing.”

With this input, the presentation showed drafts of the design of the area, showing where neighborhoods would be, their distance to schools, shopping centers and other neighborhoods.

“These people are neighbors, you always talk to a neighbor over any concern,” King explained when asked about the necessity of the workshops. “We want to listen to the land and the people in it to get to know them, there’s a lot of stuff you can’t do unless you’re on site. You want to meet the people whose lives you will affect…in big projects like this you need to talk to a lot of people. The more hands on involvement, the better.”

The new development will help keep housing rates in the area affordable while maintaining the greenery available that the public said is a priority to them, King explained.

“It’s expensive to rent commercial space or buy a place and fix it up so we will add commercial to the stock of the area and more,” King said. “We’re talking about long, linear trail systems, brand new parks, a variety of parks and small dog parks and playgrounds. There will be new destinations and restaurants. We imagine a boardwalk along the canal and a walking trail. It’ll be the place in the Valley people will want to be.”

The presentation showed multiple shopping centers, apartment complexes, townhomes and homes for single families are being planned. Open spaces will be used for parks with gazebos, trail, placitas and picnic areas.

Developers also have plans of building industrial warehouses nearby.

After the presentation, King said the construction on this development will begin in around two years and is expected to be completed within 15 to 20 years.

“Land development in the U.S. takes a while with six months to two years to receive all approvals and then construction would begin in phases,” King said. “You’ll see maybe 100 to 300 houses within the first phase followed by youth centers, workplaces, industries south of the project, but new parks will happen first.”

At the end of the evening, the question, “Is the plan on the right track?” was posted, and 80 percent of attendees voted “I love it.” 17 percent said “I can’t tell yet” while the remainder voted “no.”

“We’ve got work to do to bring that up to 100 percent,” King said, adding that there will be multiple opportunities in the future to keep the public informed on the development project.