The races for basketball playoff spots are heating up for the schools of the Big 7 with a pair of teams in need of wins to either get, or stay, in the hunt doing just that this past Tuesday night at Sharyland High School.

The Lady Rattlers of Sharyland High got seven points in the second half from Deyla Vega and solid team defense after halftime as well to pull away from a determined Palmview squad 35-17 and even their District 31-5A record at 4-4. 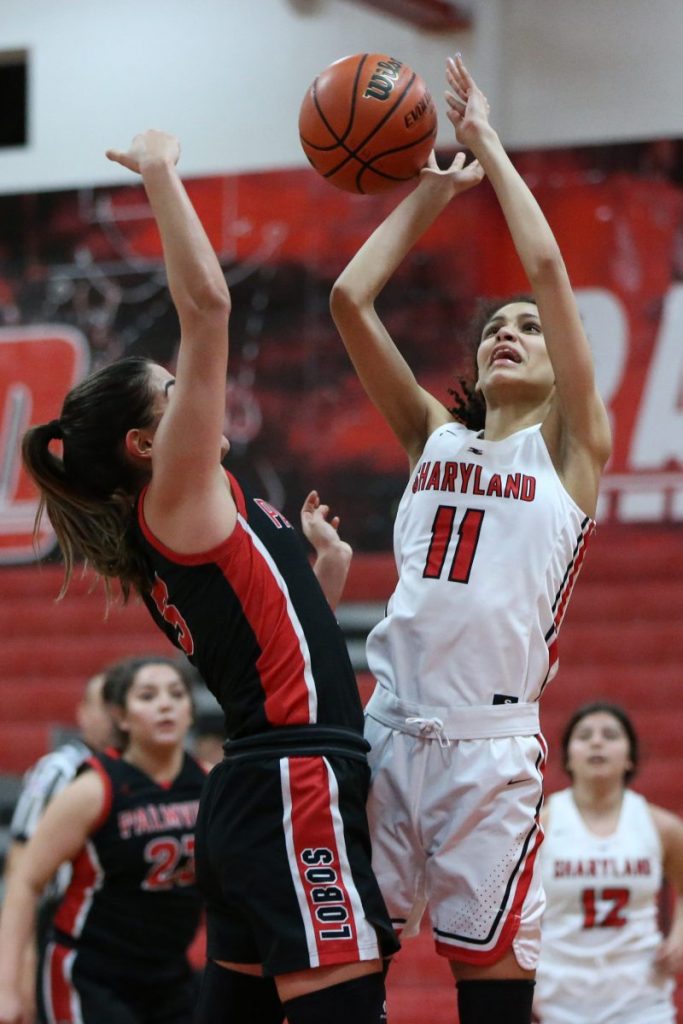 The Lady Rattlers of Sharyland High got 10 points in the second half from Deyla Vega and solid team defense after halftime as well to pull away from a determined Palmview squad 35-17 and even their District 30-5A record at 4-4 tonight at Sharyland High School Tuesday, Jan. 21, 2020. Progress Times photo by Luciano Guerra.

The Palmview boys got a game high 25 points from Irving Gamez in the second game of the night to hold off Sharyland High 58-52, extending their winning streak to four games and improving their district record to 4-2.

After starting their district campaign 2-0, the Lady Rattlers came in having dropped four of their last five, falling to fifth place in the standings. Tuesday night’s results didn’t change where the Lady Rattlers are in regards to the standings, but the win moved them closer to the coveted fourth and final playoff spot, just one game behind Mission Veterans. Sharyland Pioneer leads the district with an 8-0 record.

“(We’re) back to .500,” said Sharyland coach Monica Meza. “It means we’re still fighting; we’re still alive. It was a good start to the second round.”

It was a good all-around performance from the Lady Rattlers. Up only 18-15 early in the third quarter, Sharyland went on an 11-0 run over the rest of the quarter and into the fourth to take control. Vega scored the first seven of the run and Kayla Sanchez nailed a three pointer at the end of it to make it 29-15. Vega finished the night as the games’ leading scorer with 11.

“I started off not too good,” said Vega, “but once I got warmed up and everything it started going good and I started hitting my shots.”

Marissa Jones was a key on both ends of the floor, distributing the ball to the teams’ shooters on the one end and rebounding at the other.

“I’m just trying to help out with the offense, move the ball around as much as possible,” said Jones. “I think that’s (rebounding) my biggest role. To try and get in there, try to help out my teammates as much as I can.”

Next up for the Lady Rattlers is a trip to Roma tonight to take on the Lady Gladiators. Tip-off is scheduled for 6:00 pm.

The Lady Lobos, fresh off their first district win last Friday, put up a solid effort throughout the first half and into the third on two three pointers from Ximena Nunez but the team managed only five second half points on one field goal and three free throws.

“We wanted to control the clock which I thought we did a really good job of; keeping it close and making some shots early; we were able to convert,” said Lady Lobos coach Anisa Reyna. “But in the second half we were not able to convert. We missed too many lay-ups in transition.”

The loss drops Palmview to 1-7 in district play. They host Sharyland Pioneer tonight at 6:00 pm.

Like the girls’ game, the second game of the night was also tight for most the first half. It stayed that way until the end too. The Lobos jumped out to a 6-0 lead courtesy of a Gamez basket and four free throws but the Rattlers battled back to tie it on three different occasions before Palmview, aided by six more points from Gamez, closed out the half up 25-17.

By the end of the third the Rattlers had the deficit down to two but they never got any closer. In the fourth, the Lobos Josh Raya had two early baskets and Gamez scored another six points to secure the win, keeping Palmview tied for third place in the District 31-5A standings with PSJA Memorial. Sharyland Pioneer leads the district with a 6-0 record followed by Mission Veterans at 5-1.

The Lobos started off district 0-2, losing to Mission Veterans and PSJA Memorial. They haven’t lost since.

“We had a team meeting and some bonding going on,” said Lobos coach Albert Carrillo. “We felt like in the middle of the season we kind of lost that motivation, that drive we had early in the season. We talked about it and re-established our goals; reminded us what we wanted to accomplish this season. They’ve been reacting pretty well.” 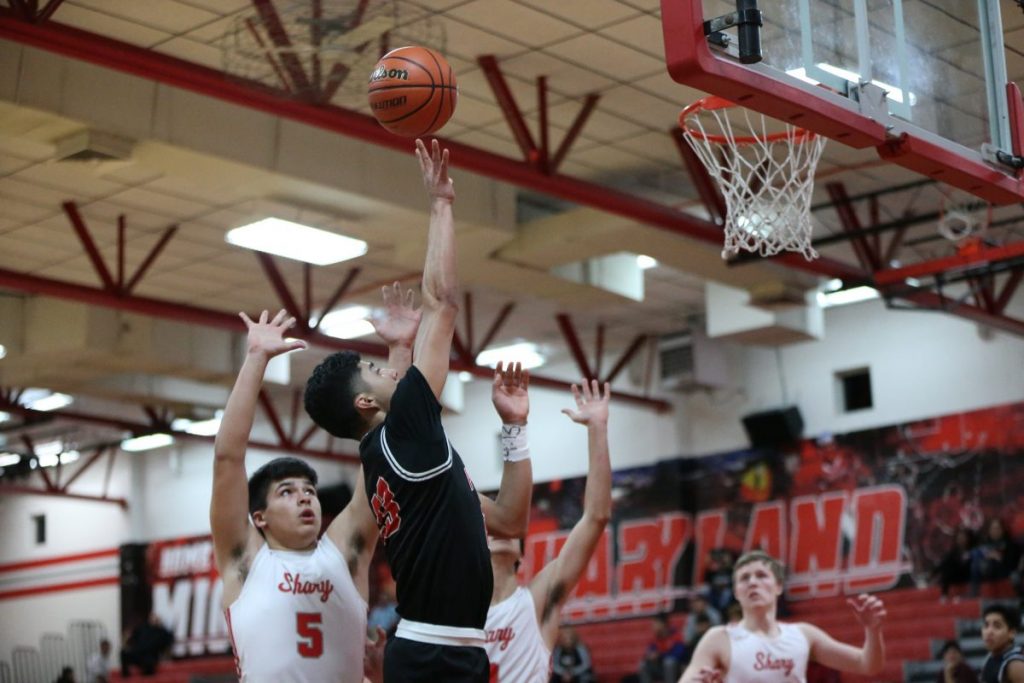 The Palmview boys got a game high 25 points from Irving Gamez in the second game of the night to hold off Sharyland High 58-52, extending their winning streak to four games and improving their district record to 4-2 Tuesday, Jan. 21, 2020. Progress Times photo by Luciano Guerra.

“We’ve got a bunch of seniors on this team,” said Freddy Flores. “We realized it’s our last ride so we had to put it together. We all want the same goal; we all want to be in the playoffs.”

Next up for the Lobos is a home game with Sharyland Pioneer tonight at 7:30 pm.

Tuesday night’s loss dropped Sharyland to 1-5 in district but they gave the Lobos everything they could handle and showed a noticeable improvement from their play earlier in the season. Alex Alvarez led the team with 21 points for the night, 17 in the second half.

“The guys are staying positive,” said Rattlers coach Danny Moran. “They’re doing all of the things we tell them to do. They’re fighting. The little things are going to win you games and we just didn’t close out those little things. That’s what happens in these close games. You have to be perfect on the little things.”

The next opportunity for the Rattlers is tonight when they travel to Roma for a 7:30 pm game with the Gladiators.