It came down to the wire last Thursday in the Donna High School gymnasium, but when the final match was over, it was the Sharyland Lady Rattlers that earned the right to hoist the District 16-5A girls duals wrestling championship trophy over their heads in victory. And with the Donna High team being the defending champions and the top seed entering this tournament, Sharyland’s come-from-behind victory against the Lady Redskins was all that much sweeter.

Entering that 185 lb. weight class match, which pitted Sharyland’s Kiarra Suelto against Donna High’s Amaya Guerra, Donna held a 27-24 lead over the Lady Rattlers. And as Sharyland High wrestling coach James Penbrook explained, that meant that in order to overcome that deficit, Suelto not only needed to win her match, but she needed to win it big. 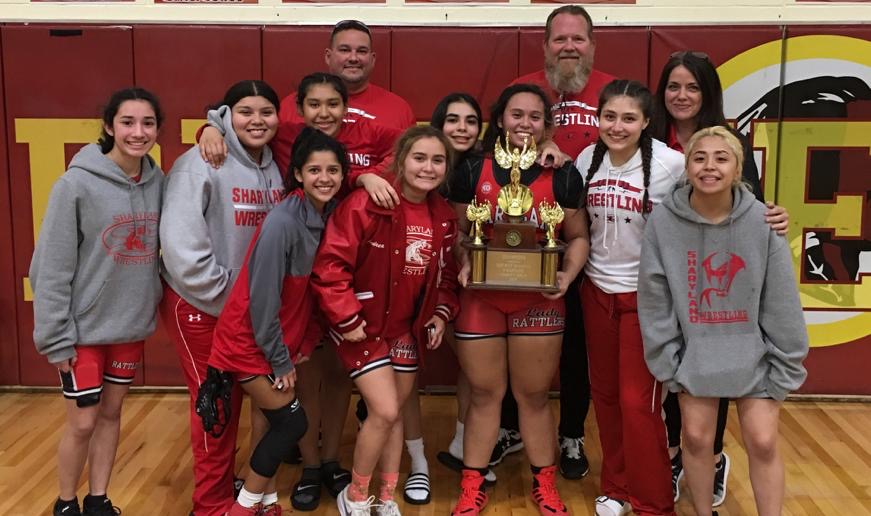 Members of the Sharyland Lady Rattlers wrestling team and their coaches pose with their trophy after taking the District 16-5A duals wrestling tournament championship last week. Courtesy photo

“If she (Suelto) had just won by a regular decision, which would’ve been less than eight points, we would’ve only earned three team points,” Penbrook said. “Had that happened, we would’ve gone to tie-breaker criteria. And with Donna having the tie-breaker advantage, they would’ve won the tournament. As a result of my girl winning 13-5, which is an eight point victory, she earned 4 team points which allowed us to win 28-27.”

But as was the case with Suelto’s championship clinching win, the bigger the individual victory the more points are awarded to that wrestler’s team.

In the Lady Rattlers’ case, they advanced into the championship round against Donna by defeating Palmview (39-12), Valley View (51-6) and PSJA Memorial (30-30) in the preliminary rounds.

The fact that the Lady Rattlers had to forfeit their 138 lb. championship round match due to a semifinal round injury to Maryjane Sustaita, made their eventual championship round win over the Lady Redskins all that much more impressive. That’s because when a team forfeits a match, it is scored the same as a pin by the other team, which is then awarded six points.

But while Sustaita’s injury did cost the Lady Rattlers six team points, Penbrook was able to turn it into a motivator for his team.

“After the semifinal round we knew that we were moving on to the finals, we got all the girls together as a team and we talked about it,” Penbrook said. “I told them that we’ve got a chance to do something really special here. We’ve got a great team but we’re all going to have to step up and make up the points that Maryjane would’ve earned for us. I told my girls that everybody needed to put their best match on the mat so that we could win it for Maryjane.”

In other Big 7 action from the girls’ dual tournament, the Pioneer Lady Diamondbacks defeated Edcouch Elsa (30-27) to take fifth place while the Palmview Lady Lobos fell to Grulla in the seventh place round (30-18).

In the boys’ tournament, which took place Friday at Sharyland Pioneer High School, the hosting Diamondbacks advanced into the finals only to fall to Edcouch Elsa 48-36. As for the Sharyland Rattlers boys, they had their way against Rio Grande City in the third place round by a score of 66-15.

Last week’s dual tournaments were the final opportunity District 16-5A boys and girls teams will have to compete before next week’s district tournament which will be hosted by Edcouch-Elsa High School. The top four wrestlers in each weight class will advance to the regional tournament in Austin the following week and the top four at regionals will advance to state. The state tournament will be taking place Friday and Saturday, February 21st and 22nd at the Berry Center in Cypress, Texas.