Coming into the 2020 high school soccer season one could expect that the boys and girls teams of Sharyland High to be considered tough draws throughout the season.  Both squads made the post season last year and return some of the same personnel this year from those teams.

The two teams early season tournament play indicated as much too. The boys’ team recorded two third place finishes while the girls won two tournament titles. Both teams opened district play this past Tuesday night with wins over La Joya Palmview at the La Joya ISD stadium as part of a double header. 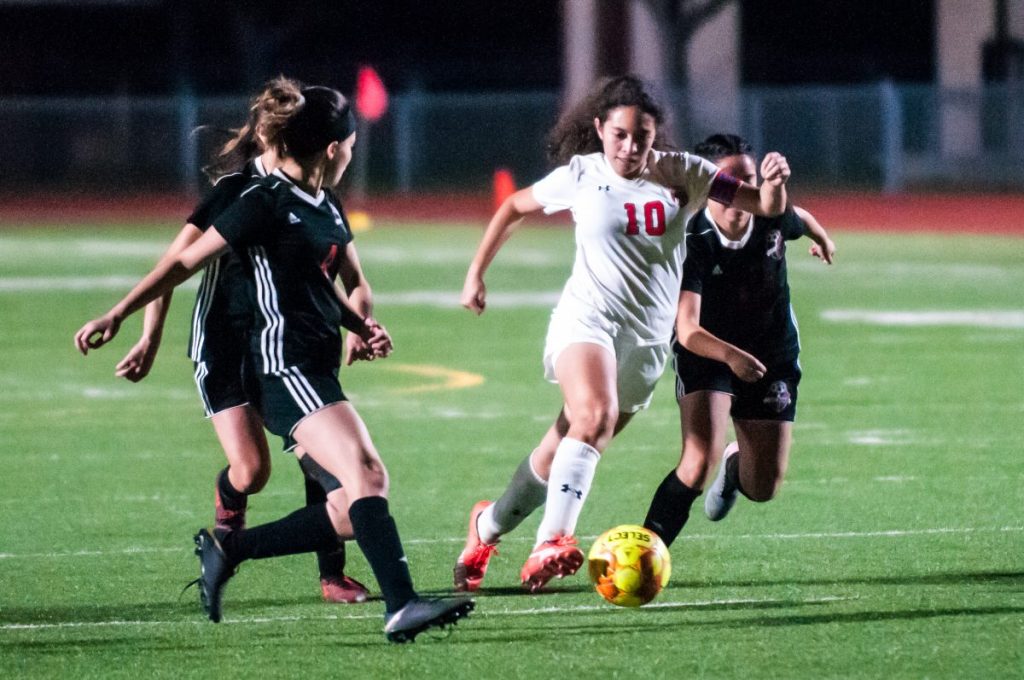 Sharyland’s Xochitl Nguma is surrounded by three Palmview defenders as she dribbles the ball down the field during the first half of the Lady Rattlers’ 2-0 victory over the Lady Lobos Tuesday, Jan. 28, 2020. Progress Times photo by Luciano Guerra

In the opener, the Lady Rattlers got first half goals from Xochitl Nguma and Chloe Ribera to defeat the Lady Lobos 2-0. Nguma opened the scoring with 17 minutes left in the first half with a nifty run through the middle of the Lady Lobos defense before putting in a shot from 15 yards out. Ribera added to the lead a short time later with a blast from almost 30 yards out that had enough on it to get in despite a deflection from Palmview goalie Samantha Cantu.

The lead held up as Ribera and the rest of the back line of the Lady Rattlers defense stopped numerous attacks from the Lady Lobos in the second half, allowing goalie Yarisbeth Zarate to keep a clean sheet.

Lady Rattlers coach Mario Ribera was pleased with his team’s successful start to the district schedule.

“It’s always good to start winning,” said Ribera. “The girls have played very well from the beginning and just to start with a win in district it’s going to really help us in the next couple of games.”

Nguma talked about the importance of getting the game’s first goal.

“I really wanted our team to get up in the first half because this is a really young team and I wanted to give them hope,” said Nguma. “So when I made the goal I was really happy.”

Ribera’s ability to be a threat on offense and then hold the defense together could make getting past the Lady Rattlers difficult as the district race gets underway.

The Lady Lobos were ready for the challenge but just couldn’t capitalize when they had the chance.

“I’m very pleased with the effort the girl’s did tonight, especially in the second half when we able to control most of the game,” said Palmview coach Daniel Malacara. “We just need to work a little more on trying to put it in goal.”

Malacara also spoke highly of Cantu’s night in goal. “Samantha was our goalie from the JV; we had to bring her up. She came in and did a phenomenal job.”

Both teams are back in action tonight when Sharyland hosts Roma and the Lady Lobos travel to Sharyland Pioneer. Both games are scheduled for 6 pm starts.

Palmview goalkeeper Ruben Martinez gets fully extended as he dives to his left to deflect a Sharyland kick just enough to keep it from going into the goal during the first half of the Rattlers’ 4-1 victory over the Lobos Tuesda, Jan. 28, 2020. Progress Times photo by Luciano Guerra

This was a game that featured the returning District 31-5A champions (Sharyland) against last year’s runner-up (Palmview), and as expected, it was a tight affair most of the way.

The Rattlers had a major advantage in both possessions and scoring opportunities in the first half but could only manage one goal in the first 40 minutes, when Gonzalez dribbled through the Lobos back line to put one home 11 minutes before the break. Earlier in the half, the Lobos Carlos Pena was denied a goal by the Rattlers Felipe Andrade, who saved the ball off the line after Pena’s shot had beat the Rattlers goalie.

Palmview did manage to tie the game up early in the second half on an Alexis Gonzalez penalty kick that was awarded for a Rattlers hand ball in the box.

Less than two minutes later Garza found the back of the net from the right side to put the Rattlers up 2-1. Gonzalez followed with his second goal, beating the Lobos goalie to a loose ball, to put the Rattlers up 3-1 with 23 minutes left and then tapped in his third a short time later to complete the scoring, and his hat trick.

“It was a very good win,” said Gonzalez. “It should go up from here.”

Garza talked about his tie-breaking goal. “We had a free kick; I went off the wing and put it in the side of the net,” he said. “The team went up, we needed to score more goals, and we did.”

“That’s the way soccer is sometimes,” said Rattlers coach Reveriano Hernandez about his team’s one goal lead at the half in spite of their numerous attempts. Hernandez had a simple message for his team at the break. “Just keep shooting. If they (his players) don’t shoot, they’re not going to score. One goal is not enough of an advantage.”

Hernandez also noted how his team lost their first two district games to start last season and managed to turn it around. “We believe,” he said. “We just got to work even harder to turn our beliefs into reality.”

Next up for the Rattlers is a home contest tonight against Roma while Palmview travels to Sharyland Pioneer. Both games are scheduled for 8 pm starts.