Fed up with what they say is a lack of action from the Sharyland school district regarding ongoing sexual misconduct allegations, nearly 50 members of the community took to the streets Saturday to demand change.

Let by two Sharyland High School graduates, members from the public held a “Voice for Survivors March” to protest what many say is a history of unanswered abuse in the district. 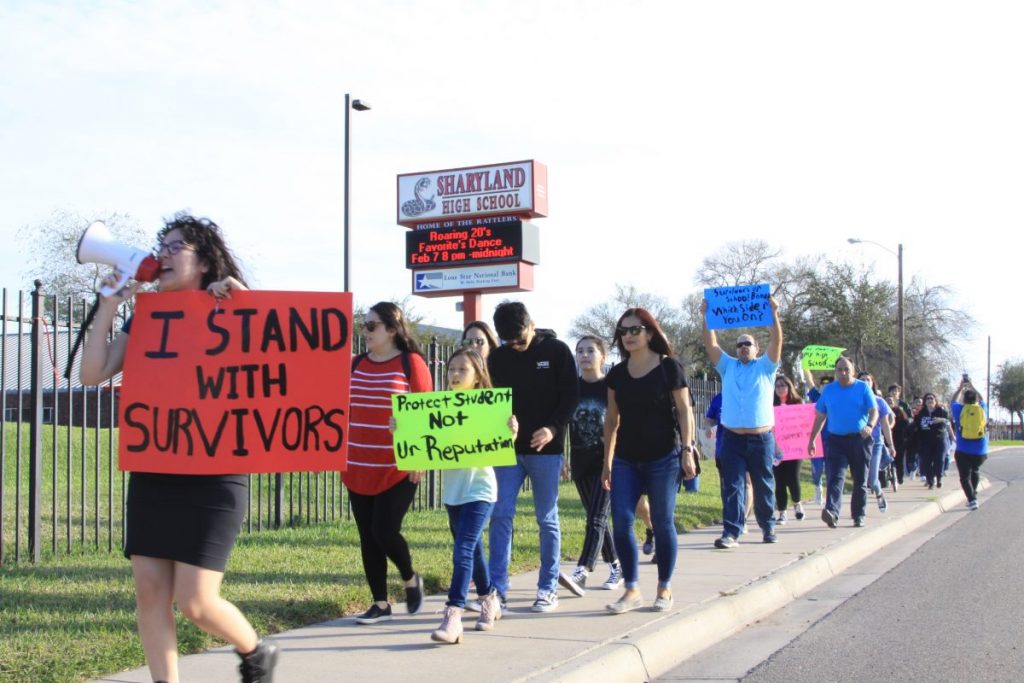 “It’s for all the survivors who think they will be ignored if they come forward, we won’t let that happen as long as we’re here,” Zitlalit Melgarejo, the co-organizer of the protest said.

The march was held in response to a heavily publicized alleged incident involving members of the Sharyland Pioneer High School swim team in Corpus Christi last fall that officials have classified as “inappropriate hazing.” A Corpus Christi police spokesperson confirmed the case is under investigation and the district has yet to provide details on the incident, citing student privacy laws.

Following the lack of clarification from officials, members of the public spoke out against the district at two school board meetings last month. At that board meeting, event organizers Melgarejo and Dante Flores-Demarchi met.

“We decided we couldn’t stop fighting,” Melgarejo said. “So we organized this march to bring awareness about the injustices that happened in Sharyland. We have a list of demands to provide a sense of community and show that we can’t let this blow over. We do care.”

Among the demands drafted by Melgarejo and Flores-Demarchi are the following; a public apology from the district for how they handled the alleged Pioneer incident, sexual assault and harassment training for all district faculty and staff, and the identification of those involved.

“When I was a student, we were encouraged to not talk about any incidents or rumors of abuse out of the safety of the student which I understand, but it’s so convenient because since they can’t talk about it or bring it up it’s easy for people to forget it happened. It’s not being addressed,” Melgarejo said. “This district needs a change, what are they doing to help the kids.”

A spokeswoman from Sharyland ISD did not respond to a request for comment Saturday.

The event featured eight speakers, including Melgarejo and Flores-Demarchi, who all spoke about past experiences with the district and they felt ignored as students coming forward with abuse claims.

After the speeches, protesters marched from the pavilion at Bannworth Park to north of Bus. 83, past Sharyland High School and the district’s administrative offices.

Among the parents at the protest was Linda Medley, an assistant principal at a high school in the Corpus Christi school district. She has relatives attending Sharyland Pioneer High School and said she empathized with the anger current and former students were expressing at the protest.

“As educators we are supposed to be a voice for the student and protect them and have a safe haven for them and it looks like that’s not happening here,” Medley said. “I look at my nephew going in as a freshman in that school and would hate if he was being hazed. It’s our job to safeguard our students.”

Medley was joined by her 9-year-old daughter, Alexis, who carried a sign saying “Protect Students Not UR Reputation.”

“I’m trying to teach her that she has a voice and that when things happen that we’re not OK with, we can peacefully protest it to make a change,” Medley said. “Even though they’re so young, these students have a voice. Just because we’re adults we’re not always right. They’re young adults who need to understand that they can make a difference and their opinion does count.”