Waiting along with the box at the Harlingen CISD Aquatics Center this past Monday were coaches, athletic directors, administrators and members of the media from all over the Valley, anxious to see the contents. At 9 am many of them crowded the table the box sat upon to be given a copy of the assignments while others used their cell phones to bring up the same information from the UIL website. Both groups would now find out what had been the subject of predictions and speculation dating back to last year: what district their schools and teams would be a part of for the next two years and who their opponents would be. 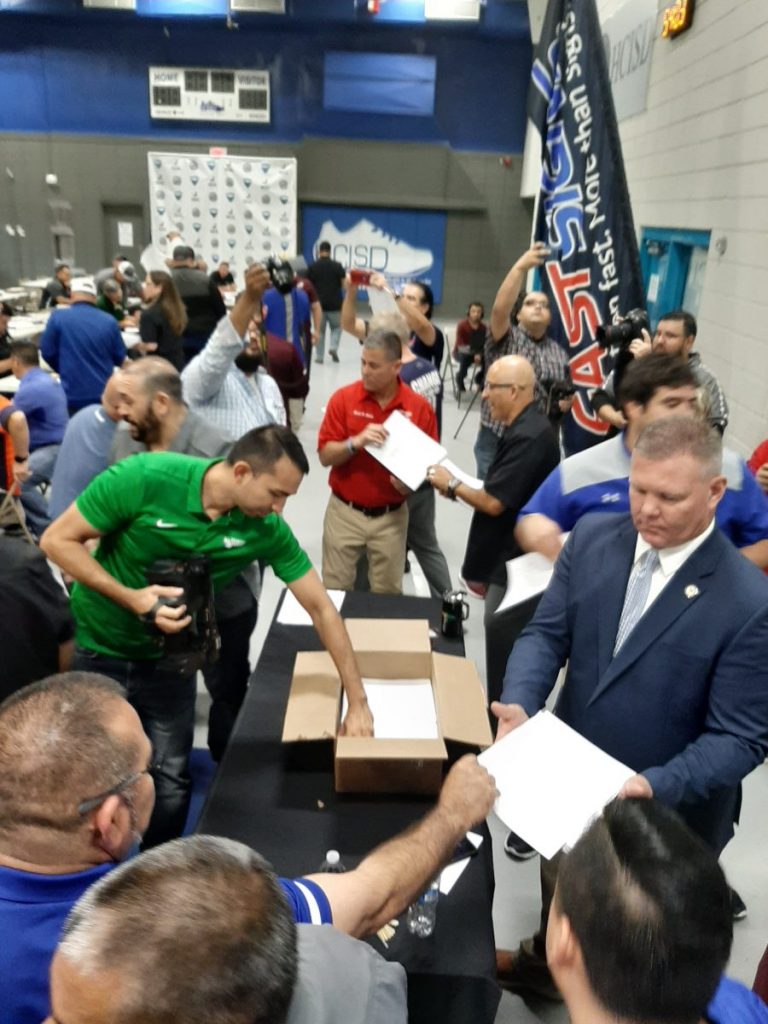 The UIL released it’s realignments for the 2020-21 and the 2021-22 school years this week at a meeting attended by Valley high school coaches, athletic coordinators, athletic directors and members of the media Monday, Feb. 3, 2020. Progress Times photo by John Hamann.

For those associated with the seven high schools from the Mission, Sharyland and La Joys school districts, the Big 7, there was a mixture of emotions before the information became available.

Sharyland High head football coach Ron Adame has been through the process, which takes place every two years, numerous times. “They’re always interesting,” said Adame about the reveals. “You’re going to have some people that are pleased; you’re going to have some that are surprised. We’ve been in situations where we’ve felt both. But hopefully today there’s no surprise.”

“It’s exciting; it’s always a fun time,” said Mission Veterans head football coach David Gilpin. The Patriots have already known since December that their football team would be moving from UIL Class 5A Div. I to UIL Class 5A Div. II based on earlier released enrollment numbers. A number of other Valley schools were anticipating moving down from 6A to 5A as well, fueling the speculation and the nerves. Gilpin felt confident on where his football team would be placed but wondered about the assignments the school’s other sports would receive. “I am curious to see what’s going to happen to our other sports,” he said.  Not knowing exactly what would be revealed was on the minds of others too, perhaps none greater than some in attendance from La Joya.

“I’m a little nervous,” said Juarez-Lincoln head football coach Tomas Garcia. “You know there is a lot of talk about us going over to play in the district with the Laredo schools.”

La Joya ISD Athletic Director Victor Garza was clear about what he wanted to see. “We’re hoping to stay in the Valley. That’s number one,” said Garza. Valley teams have at times in the past found themselves included in districts with schools from Laredo and Corpus Christi and the extra travel, among other things, is always a concern. “Somebody has to travel,” added Garza.” That’s what they (the UIL) will always tell you. Hopefully it’s not us.”

As the assignments became public, Garza, along with a few others received mixed results.

For starters, the schools of the Big 7 will get to stay in the Valley when football season rolls around next fall, although there will be some changes. Like the last two years, the seven teams will be split among three different districts although some new opponents will be there to greet them.

La Joya High, La Joya Juarez-Lincoln and Mission High are still in the 6A class but will now be part of District 31-6A instead of 30-6A. The new alignment keeps them with PSJA High and PSJA North while adding the four Edinburg high schools to the mix in a nine team district.  The same schools will be grouped together for volleyball and basketball too.

“It was a little bit different than what we expected,” said Mission High football coach Koy Detmer, “but it was one of the things we thought could happen.” Detmer went on to comment how he expected it to be a challenging district.

La Joya High head football coach Reuben Farias agreed with Detmer’s assessment of the new district. “It’s a bigger district; a tougher district. But overall we won’t have to travel, better for us community-wise. It’s good to go back to Edinburg.”

UIL District 16-5A Div. I remains a ten team football district that includes La Joya Palmview along with four schools from Brownsville, three from McAllen, Donna High and Weslaco East.  Five of the ten teams, including Palmview, made the playoffs last season.

“It’s going to be a dog fight just like last year,” said Palmview head football coach Margarito Requenez. “The sad thing about it is there is going to be a couple of teams that aren’t going to make the playoffs next year. Hopefully I’m not one of them.”

The same scenario could also happen in UIL District 16-5A Div. II as the nine team district also features five teams that made the playoffs last season. The five includes Big 7 schools Mission Veterans, Sharyland High and Sharyland Pioneer. The rest of the district includes PSJA Memorial and Southwest along with Valley View, Roma, Edcouch-Elsa and Mercedes.

Coach Lee was referring to the district that Pioneer, who along with Sharyland High, will compete in when it comes to the sports of volleyball, basketball, and most likely, some other sports beginning in the fall.  Along with the Rattlers and Diamondbacks, District 31-5A will have the three McAllen schools, PSJA Memorial, PSJA Southwest and Valley View.

Sharyland High volleyball coach Raul Castillo spoke about the make-up of the new district too. “It’s going to a good one. It’s going to be a very competitive district. This is what you want as a coach and as players is to be with the toughest teams.”

Not every school could, however, stay completely in the Valley. The reveal for volleyball and basketball placed La Joya Palmview and Mission Veterans in District 30-5A along with Laredo Cigarroa, Laredo Martin, Rio Grande City and Roma.

Mission ISD Athletic Director Leticia Ibarra expressed concern that the six schools may be hard pressed to find non-district opponents to play but stayed positive about the morning’s atmosphere and its outcome.

“It’s always exciting to show up every two years; (the) anticipation. We’ll make it work.”