Mission has plans to make Lions Park the first all-inclusive park in the city. 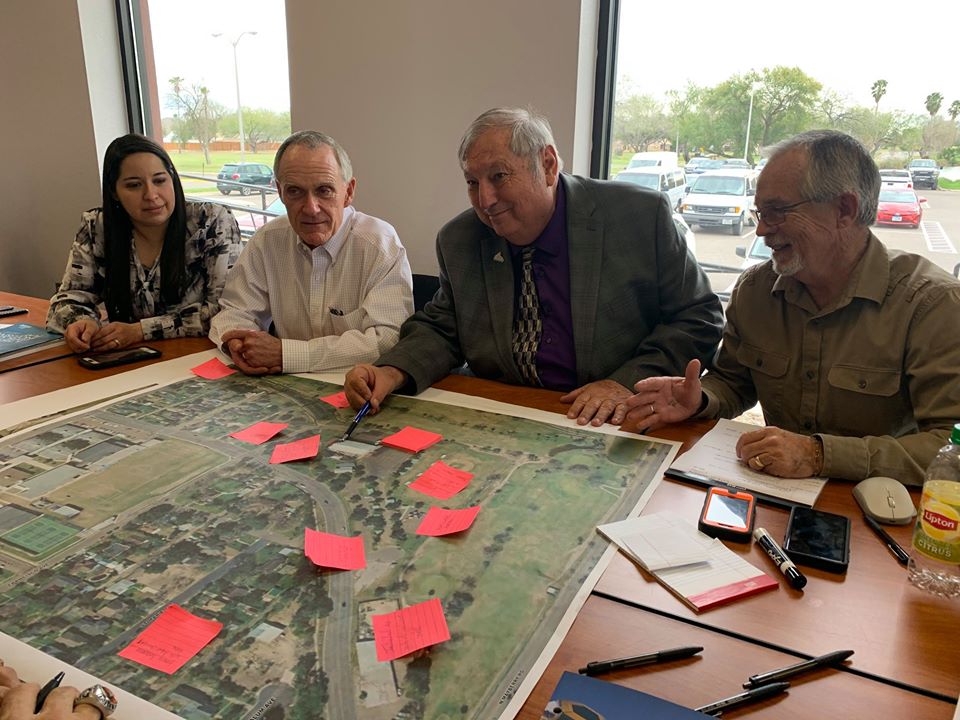 “It was the first of several that we will schedule to work out what everyone wants,” Perez said. “We want to make sure we look at everything collaboratively.”

During the Jan. 17, 2020 city council meeting, council approved ARKiiFORM, LLC as the architect firm handling the Lions Park project. The firm is currently working on the roof replacement projects for the Speer Memorial Library and the Mission Historical Museum, and was also present at the charette.

“The driving force behind it all is to replace the feature that is there,” Bentsen said of the playscape. “I think the Lions Club purchased that back in 1986, and it’s totally obsolete. Mayor wants to be an all-inclusive city.”

Nothing has been finalized as the city is in the preliminary process of the project, but it is expected to be completed over four phases and include an inclusive playscape redesign, a redesign of the Mission Community Center, a redesign of the park and a potential satellite recycling center. The first phase of the project will include the inclusive playscape, a project the city has been working on for some time.

“We had been discussing it for some time,” Perez said. “Lions Park, because we felt it was central, it became the designated park that we would do first.”

Bentsen said that ever since he has been Parks and Recreation Director, the need has been brought up by residents in the form of comments and complaints.

“It is a growing need that the states are being faced with,” Bentsen said. “There’s been a lot of murmuring and discussions in the background.”

As nothing has been decided, Mission does not know what the cost estimations for the projects would be. Perez noted that the city would be seeking grant funding for Lions Park, and Bensten added that other inclusive parks have funding sourced from donors.

“The grant process is like a year,” Bentsen said. “There’s individuals as well as corporate support for something like this.”

“We’re already working on that,” Perez added, speaking on the grant seeking process. “I believe there’s plenty of opportunity out there.”

With an inclusive park and satellite recycling center, Mission leaders aim to meet the needs of residents and members of surrounding communities.

“We want everyone to have access to our amenities,” Perez said. “All-inclusive includes everyone in our community, regardless of any disability that they might have.”

The satellite recycling center, which may be at Lions Park or located in another park depending on the final redesign, will work as either a drive-thru or drop-off model.

“Whether it’s there or a different location – because we have several properties that we’re looking at throughout the city – the goal is to have a building where you either drive through or drive by and drop off your recyclables,” Perez explained. “We’re looking at a central location at first, and eventually we want to have other locations to be able to have everyone utilize it through the different areas of our city.”

The priority for Lions Park, however, is the inclusive playscape. Bentsen said that often, disabled children have had to watch on the sidelines as their siblings utilized amenities, so creating an inclusive park will open up the opportunity for everyone – parents and children alike – to partake.

“Somebody with a disability will be able to enjoy the same things, they can play along side by side,” Bentsen said.

Perez hopes that the all-inclusive park will draw people not only from Mission, but surrounding communities.

“Our parks are open to any and all,” Perez said. “In a lot of our projects we look at regionalization, and we welcome everyone to our city. Everyone is welcome to use our amenities, especially our parks.”

Once completed, Mission expects to host new all-inclusive events at Lions Park, and are already facilitating with local organizations to make it happen.

Perez and Bentsen added that Mission has already begun making strides toward growing parks and amenities, citing the bustling Mission Tennis Center which opened just last year. The CTA (Community Tennis Association) is hosting a tournament this weekend, and the complex has worked with blind tennis players in their own tournament.

“We don’t want to leave anyone out,” Perez said.

No set meeting has been planned for Lions Park, but Bensten and Perez are ready to get started no matter how long it takes.

“Now that it’s evolved and gotten to this level, that kind of cuts out a year of the project, but we still have to do the whole design phase, do the feasibility study and come up with funding,” Bentsen said. “The magnitude of the playground equipment itself is sizable. It’s something that won’t happen overnight, but there’s some outlying structures so that we can at least get the ball going.”