One week after opening district play with a pair of victories over La Joya Palmview, the Lady Rattlers and Rattlers soccer teams of Sharyland High did it again with identical 4-0 victories over Sharyland Pioneer Tuesday night at Richard Thompson Stadium in Mission. Combined with their victories over Roma last Friday, both teams are now 3-0 in District 31-5A.

In the opener both the Lady Rattlers and Lady Diamondbacks took turns probing openings in the others defense over the first 20 minutes of the first half but neither put any significant pressure on the other. 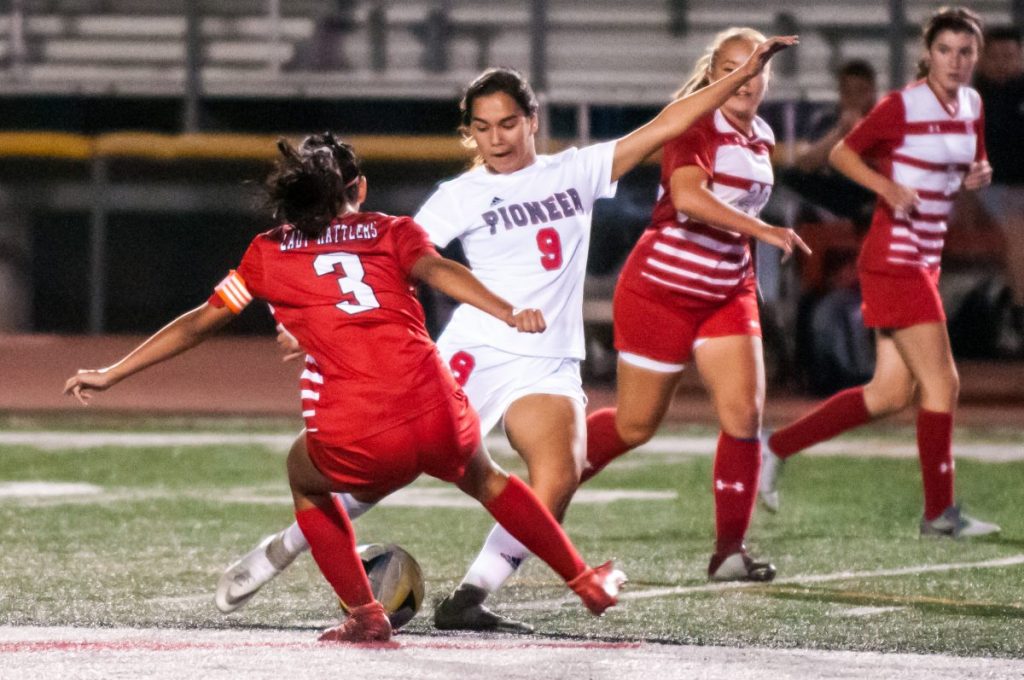 Pioneer’s Bella Austin and Sharyland’s Mattison Gonzalez both go for the ball during the first half of the Lady Rattlers’ 4-0 victory over the Lady Diamondbacks Tuesday, Feb. 4, 2020 evening. Progress Times photo by Luciano Guerra.

That changed soon after when Sharyland High’s Xochitl Nuguma was fouled while making a move from about 28 yards out. Nguma put enough power on her ensuing free kick to keep the Pioneer goalie from securing it cleanly, allowing Anacecilia Pena to put the rebound into the back of the net for the game’s first goal.  The Lady Rattlers tried to extend the lead on a number of shots from Nguma in the last five minutes of the first half but the Lady Diamondbacks defense was able to keep the deficit at 1 going into the half.

Pioneer saw their best chances to tie the game 10 minutes into the second with a free kick of their own and two corner kicks, only to see their shots either stopped or fly over the net.

A short time later Nguma was back on the attack, winning a penalty kick after being tripped up in the box, and putting it home to increase the Lady Rattlers lead to 2-0. Her next shot made it 3-0 after she dribbled past several defenders before guiding the ball past the goalie and into the net just inside the far post. Pena scored her second, and the team’s last of the night, when she hustled to a loose ball in the box and tapped it in with 10 minutes to play.

The four goals were more than enough for the win as the Lady Rattlers goalie Yarisbeth Zarate and the teams back line of Mattison Gonzalez, Erin Requenez, Lilibeth Zarate and Chole Ribera stopped or sent back all of the Lady Diamondbacks attacks.

“Our back line has to ready for anything,” said Gonzalez, one of seven sophomores on a very young team that also suits up seven freshmen.

Goaile Zarate is one of the freshmen and she is glad to have a rock solid defense in front of her. “They know how to talk to each other and they really know how to work together. They really save my life sometimes.”

Lady Rattlers coach Mario Ribera was pleased with the night’s efforts. “I’m very proud for our girls,” he said. “Everything went our way. We did the right things and the goals came in.”

After starting district play with two wins of their own, Pioneer coach JJ Lopez was pleased with how his teams opened this game. “The first twenty minutes it was a pretty even match and then they had that one goal off of the free kick and it brought us down a little; got us a little distracted and disorganized in the back. They (Sharyland) opened it up in the second half and we just couldn’t recover.”

Both teams are back in action tonight as Sharyland High travels to Rio Grande City and Pioneer visits Mission Veterans. Both games are scheduled for 6 pm starts.

In the second game of the night, the Sharyland High boys’ teams combined relentless pressure all over the field with an unselfish passing attack in taking down Pioneer 4-0. 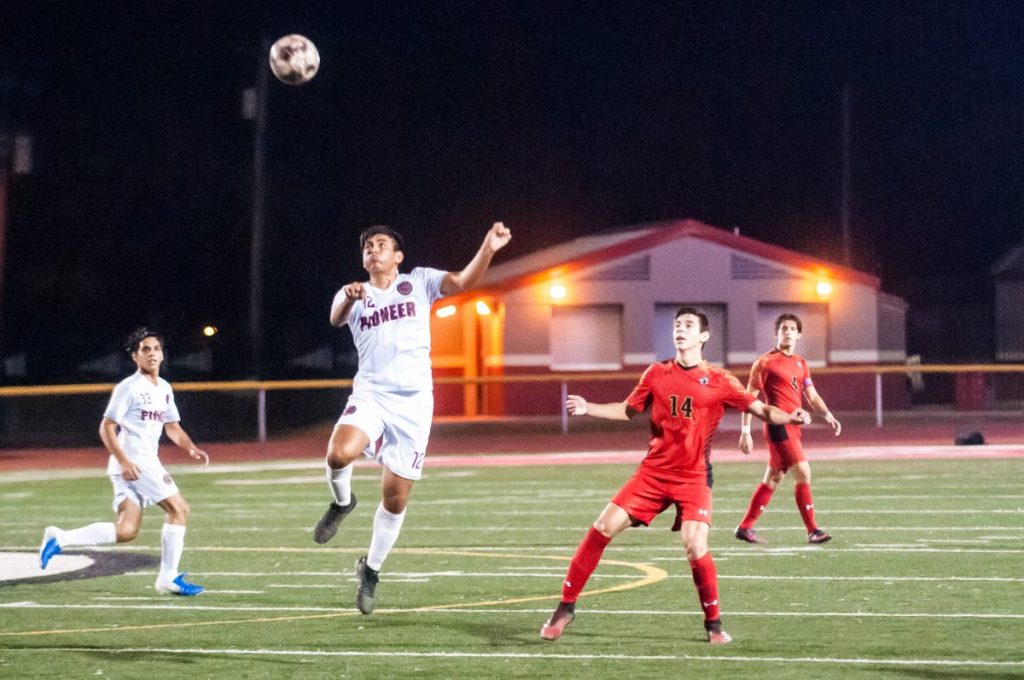 Pioneer’s Nicolas Contreras goes up to hit a header while Sharyland’s Marcelo Garza looks on during the first half of the Rattlers’ 4-0 victory over the Diamondbacks Tuesday, Feb. 4, 2020. Progress Times photo by Luciano Guerra.

The Rattlers dominated possession and kept the Diamondbacks defense on their heels for most of the night with attacks from every side of the goal. Jose Ponce headed in a well-placed corner kick from Luis Delgado just 12 minutes in to the game to open the scoring and Aldo Rosales was in the right place at the right time, putting Manuel Cantu’s hard shot on goal into the back of the net after it rebounded off the Diamondbacks goalie to make it 2-0 seven minutes later.

Ponce spoke about how his team responds when they score. “When we score that first goal everything gets easier for us.”

The Rattlers didn’t relax with the lead either, putting together a number of other opportunities before the half ended. Pioneer managed to hold them off for the rest of the half but early in the second half the Rattlers struck again, when a deflected cross found Marcelo Rodriguez standing alone at the far post. His volley extended the Sharyland lead to 3-0 before Alonzo Gonzalez closed out the scoring; putting a shot in from close range with 34 minutes left in the game after a nifty bit of dribbling got him past the defense.

Rodriguez talked about the importance of keeping everyone involved in the game. “If you’re not willing to play with the team the results at the end of the day are not going to come out.”

Coach Reveriano Hernandez talked about the offensive play of his team. “We’re just trying to get a feel for the ball. Right now I think we are in the process of learning to play as a team. I think we are headed in the right direction.”

Like the Lady Rattlers, the Rattlers also got solid play from their defense. Led by goalie Julian Garza and a back line of Luis Lastra, Cristobal Flores, Alejandro Espinoza and Felipe Andrade, the group gave the Diamondbacks only a few real opportunities to score.

Pioneer came into the night’s game having struggled to get results with a very young team.  “We’re playing a lot better than from the very beginning,” said Diamondbacks coach Alex Lopez. Pioneer opened district play with a narrow 3-2 defeat against PSJA Southwest before beating La Joya Palmview 1-0. As far as the way his team performed against the Rattlers, Lopez added, “My guys played the best they could have but this time we just had a very tough opponent.”

Both teams are on the road tonight with Sharyland travelling to Rio Grande City and Pioneer visiting Mission Veterans. Both games are scheduled to start at 8 pm.