A program at the Mission Housing Authority dedicated to ensuring tenants are able to get back on their feet received federal funds last week.

During a press conference at the Mission Housing Authority, state Rep. Henry Cuellar presented the local agency with a $54,456 check Friday, Jan. 31. The federal funds will go toward funding the Family Self-Sufficiency Program in the agency. 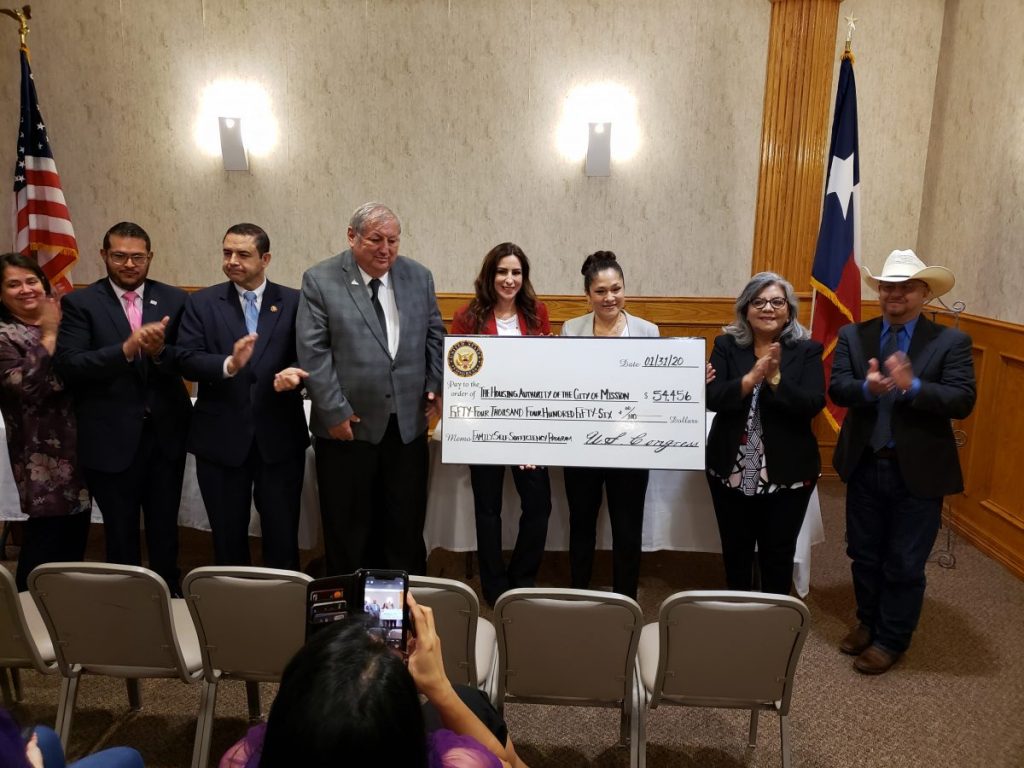 Congressman Henry Cuellar along with officials of the city of Mission and Mission housing Authority at a check presentation Friday, Jan. 31, 2020. Progress Times photo by Jose De Leon III

“In order to break the cycle of poverty, we must give families the tools and services to do so,” Cuellar said of the FSS program. “This program will give people the ability to expand their education, obtain job training, and plan for their future in order to gain independence and financial security.”

The FSS is designed to help people seeking assistance from housing authorities to grow their income and make them financially stable to leave their housing authority. People taking the program attend numerous workshops to help them set and work toward goals of self-sustainability, Gloria Rodriguez, a caseworker and coordinator with the Mission Housing Authority said.

To graduate, a participant must be free of welfare assistance for 12 months after learning how to tackle their financial challenges, grow their income and earn a little extra for their troubles in the form of an escrow savings account that the housing authority cashes out for them upon completion.

Participants must finish the program within five years unless they are granted a two-year extension, or risk forfeiting their escrow.

The funding will go toward the salary of Rodriguez and a second coordinator, MHA Chairwoman Connie Garza said.

“We’re going to be able to help more families to obtain the self-sufficiency they need to better their lives,” Garza said.

Cuellar also presented the Housing Authority of Hidalgo County with a $95,306 check at the press conference. The program currently serves 101 families in the agency.

HUD awarded nearly $80 million to 700 Public Housing Authorities across the country, 35 of those in Texas. According to Zuleika K. Morales-Romero, every housing authority in the Valley received funding for their FFS program.

Cuellar praised the Mission Housing authority which graduates families from its FSS program every six months and had one family graduate last month.

“The housing authorities in the Valley get it, they understand people need public housing but we need a way to move them out to get the training and education they need to stand on their own,” Rep. Cuellar said. “We want to make sure we put more money in the program by making sure it works to continue to fight for more funding.”

The program concluded with Chairwoman Garza receiving a special recognition from Cuellar for 50 years of community service. According to Cuellar, Garza was the city’s first female patrol officer, the first female firefighter in the city and has served on numerous boards including the Mission school district, Mission Boys and Girls Club and Mujeres Unidas.

“I am so honored to be the recipient of this recognition,” Garza said. “I’ve volunteered so much because I care about the community, it’s why I’ve done it all these years.”