Decades after its release in theaters, a movie set and filmed in the city of Mission was honored Wednesday.

“She Came to the Valley,” a 1979 film set in the city of Mission, was screened to audiences at the Mission Historical Museum at two sold showings throughout the day. The movie was based on the 1943 novel by Cleo Dawson and is based on her mother’s experiences when her family moved to the Valley in the early 1900s. 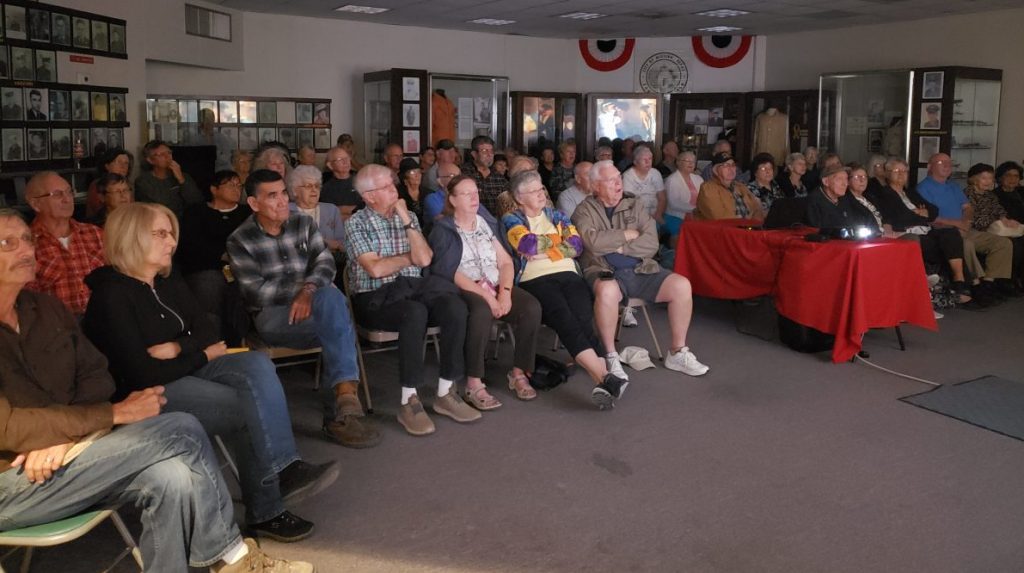 Attendees watching a screening of the 1979 film “She Came to the Valley,” which was filmed in the city of Mission and based on a book by local resident Cleo Dawson Wednesday, Feb. 5, 2020.
Progress Times photo by Jose De Leon III

“The Dawson family were pioneers in the city, they arrived in 1908 after the city was formed and were here as the city grew,” museum curator and archivist Vernon Weckbacher said.

The film, starring Academy-Award nominee Ronee Blakley, Scott Glenn, Dean Stockwell and Tejano music star Freddy Fender, follows a family who move to the city of Mission seeking a better way of life and end up caught in the middle of a battle between revolutionary leader Pancho Villa and government soldiers.

“It’s so far the only major Hollywood production filmed in Mission,” Weckbacher said. “The novel it is based on was popular and went through multiple printings throughout its publications and Cleo because a figure in pop culture as a famous psychiatrist and public speaker. For many people, the story of ‘She came to the Valley’ was the first time mainstream audiences were introduced to the Valley and life there.”

The novel is “historical fiction” according to Weckbacher with many characters and events based on real people and events the Dawsons experienced in Mission.

According to the curator, the Dawsons moved to the city of Mission after living in Laredo and hearing of the agricultural opportunities available in Mission. Dawson’s father and sister eventually died a few years after moving to the area, leaving behind  her and her mother. Her mother eventually opened up a general store and a lady’s boutique store and the two held a special bond that led to Cleo writing the novel in honor of her mother after her mother died in 1937.

During a book tour to promote the hardcover edition of the book, a Hollywood producer met with Cleo and picked up the rights to make the movie.

“The movie was a big deal here back then,” Weckbacher said. “A lot of local people had parts in it, I was here when the movie was made and released and it played to sold out showings in the local theaters because everyone wanted to see their town in a big movie. Of course the movie wasn’t a big hit but you wouldn’t know that from the reaction it got here.”

Cleo taught Spanish at Mission High School before meeting and marrying an army officer and moving to Kentucky where she lived out the remainder of her life, Weckbacher said. Despite the move, Cleo frequently visited the Valley, maintaining friendships with people in the city, having a room in her Kentucky house decorated in Mission memorabilia and participating in the Texas Citrus Fiesta Parade of Oranges every year until she passed away in 1991.

According to Weckbacher, Cleo only wrote one other book that was unpublished and a screenplay based on the manuscript that is being stored in the museum archives. Despite only having written one book, Weckbacher said “She Came to the valley” leaves behind an impactful legacy in the city of Mission.

“There’s a lot of local pride in the book, movie and in Cleo Dawson,” Weckbacher said. “It’s a historical story that is an accurate portrayal of the spirit and setting of the city back then. The book tells you about some of the building blocks that built the Valley.”

Copies of the book and of DVD for “She Came to the Valley” can be purchased at the Mission Historical Museum.