Senator Juan “Chuy” Hinojosa is taking his support of 5×5 Brewing Co. to the next level.

Hinojosa, a Marine Corps veteran from the Vietnam era, became an investor for the local craft brewery located in Mission last week. An announcement was made regarding his joining of the ownership team at the brewery, located in the Mission Center for Education and Economic Development. 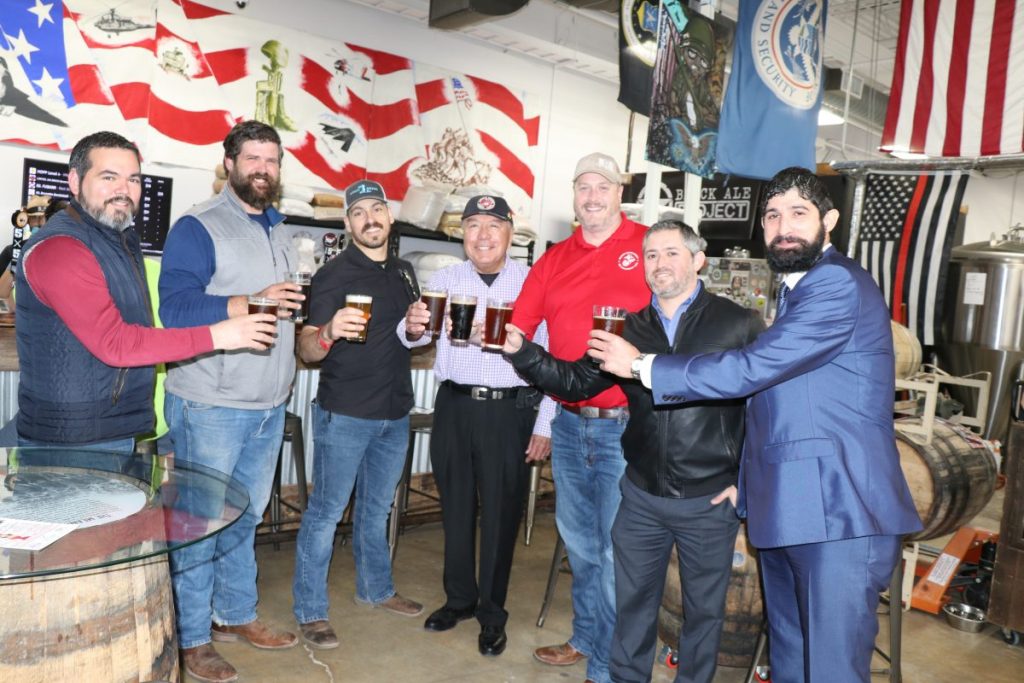 Senator Juan “Chuy” Hinojosa and the 5×5 Brewing Co. team toast with glasses of craft beer made at the brewery in Mission. Photo courtesy of the city of Mission.

Hinojosa first became a fan of 5×5 at their opening in 2016. Since then he has become a strong supporter.

5×5 Brewing Co. is owned and operated by veterans of the United States Military. Hinojosa is glad to be joining as an investor.

“It’s owned by veterans, 100 percent, and I’m a veteran so I was honored to join the team,” Hinojosa said. “It’s in support of veterans, and it’s the best draft beer I’ve ever tasted.”

Being a veteran includes a history of shared experiences that connect people across generations, and Hinojosa is glad to be promoting that through 5×5.

“We’re bonding from Vietnam to Afghanistan to Desert Storm to other parts of the world,” Hinojosa said. “These are men and women who volunteer for the armed forces to defend our country, defend our freedom and protect our families.”

Hinojosa found 5×5 to be a great place to meet up with other veterans, and thinks it is good for the heart and soul that their experiences are shared.

“The focus is not politics, it’s not Republicans or Democrats, the focus is on who we are as Americans,” Hinojosa said. “We want to talk to other veterans that need our help.”

Hinojosa added that veterans are family – they are the brothers, sisters, fathers and mothers, uncles, aunts and neighbors – so it is important to support them in adjusting back to civilian life.

“We are one family,” Hinojosa said. “For 20 years after the Vietnam War, veterans were not provided with the proper support by our communities.”

Returning to America now after serving has been better in recent history according to Hinojosa, but there is still support and services that are necessary for all veterans.

“They need to feel welcome here at home, that the community will help them to be successful after being in combat zones.”

The initiative, energy and discipline of the team at 5×5 Brewing Co. is what initially caught Hinojosa’s attention in 2016.

“It’s like in the Marine Corps, you get things done,” Hinojosa said. “When you have challenges, you meet those challenges, you don’t answer questions with ‘I don’t know,’ you say ‘I will look into it, let me find out, I’ll get an answer,’ and that’s the kind of can-do attitude and leadership that was born in the military.”

Hinojosa hopes to help continue what 5×5 is doing in growing the industry, reaching out to veterans and ensuring they have a place to call home.

“We want to enjoy and conduct events where we have vendors come in and share part of the profit with charitable veteran organizations,” Hinojosa said. “We’re very pro-community. I’m just so happy and proud to be part of this team.”