The day after being arrested on wire fraud charges, former La Joya Mayor Jose A. “Fito” Salinas, 81, walked out of the McAllen federal courthouse Thursday alongside his wife and lawyer, out on a $75,000 bond.

Salinas, who is accused of participating in two separate corruption schemes, appeared before U.S. Magistrate Judge Juan Alaniz Thursday for a detention hearing where his unsecured bond was set and Salinas pleaded not guilty to the three counts of wire fraud. 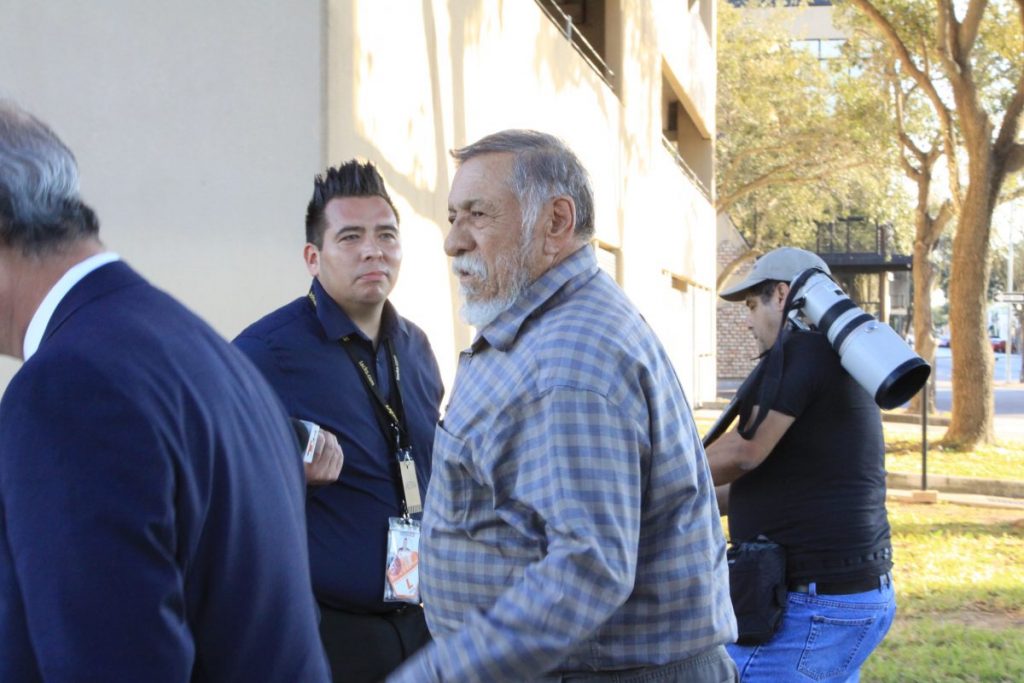 “Obviously this is a significant public corruption case and I will take these allegations seriously,” Alaniz said during the hearing before setting conditions for Salinas’ release

Salinas declined to comment after the hearing as did his wife his wife Mary – who serves on the La Joya city council – and his attorney, Richard E. Zayas.

As part of his bond, Salinas’ travel is restricted to the southern district of Texas, must not drink alcohol and avoid all contact with co-defendants and potential witnesses in the case against him.

This includes his daughter, Frances Salinas De Leon, who is named in the indictment against her father and faces similar wire fraud charges.

“She resides in San Antonio and frequently travels to McAllen for court and to speak to her lawyer,”  Assistant U.S. Attorney Sarina DiPiazza said. “It cannot be determined if they’re communicating about the case or not.

The first two counts accuse Salinas of participating in the scheme between former La Joya Housing Authority Chairwoman Sylvia Garces Valdez and his daughter, Francis Salinas De Leon where Valdez was awarded a public relations contract by the city in 2018.

“Valdez gave, offered, and agreed to give cash to Frances Salinas De Leon intending to influence and reward Jose A. Salinas, the elected city of La Joya mayor, for his influence in granting a public relations contract.,” the indictment against Salinas states.

As part of the contract, Valdez received a $12,000 retainer in June 2018 and was paid $2,000 a month until the contract ended the following December. As a condition for receiving the contract, Frances was to allegedly receive a portion of the Valdez’s payments.

Valdez and Frances were arrested last year on federal felony charges relating to the contract that they pled not guilty to last month. Valdez and Francis face up to 10 and 20 years in prison, respectively.

The indictment against Salinas also alleges that from January 2016 to approximately July 2016, Salinas devised a scheme that resulted in the City of La Joya purchasing property he owned at a highly-inflated rate.

The indictment says that through the scheme, Salinas communicated via email, a violation of commerce laws.

The email exchange in question that’s listed in the indictment was made in February 2016 between the city’s official email account and current city attorney Robert Jackson, who didn’t respond for a request for comment as of press time.

If convicted, Salinas faces up to 20 years in federal prison.