The UIL girls’ state basketball playoffs begin next week and with it comes both the familiar and the new for the qualifying teams from the Big 7. Here is a look at the teams who have qualified.

The Lady Diamondbacks return to the post season having won their second straight District 31-5A championship. The team went 14-0 in district play and are 22-12 overall. Not bad considering that the team was 8-12 in non-district and tournament play. 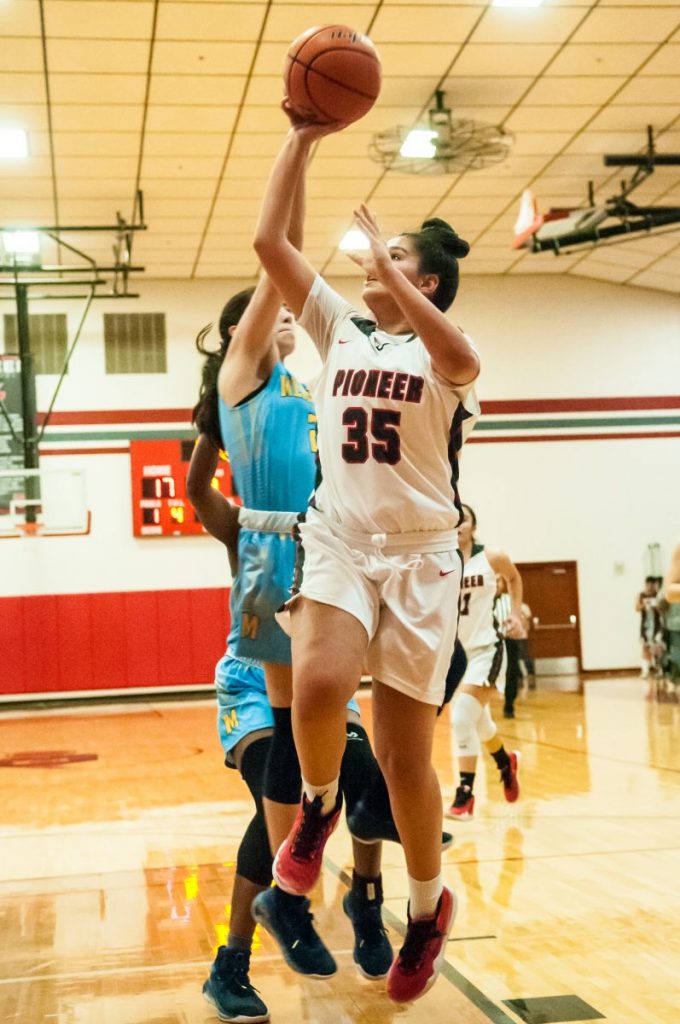 Pioneer’s Priscilla Garza prepares to take a shot during a non-district matchup between the Lady Diamondbacks and the McAllen Memorial Lady Mustangs.
Progress Times photo by Luciano Guerra.

“It (the pre-season) was all to prepare for our district season,” said Pioneer coach Nicole Villarreal. “We played tough teams and went to tough tournaments for the very reason of making sure our kids were prepared for our district.”

The Lady Diamondbacks also had to go the entire season without Audry Hornaday, a key player in the 2019 campaign, on the floor. Instead the team evolved into a unit of eleven players, all capable of contributing when on the court, and Hornaday, who described herself as a key bench player for the team.

“She (Hornaday) is basically our support system,” said Laura Ramirez, a senior post player on the team. “We wouldn’t be here without Audry.”

According to Villarreal, Ramirez and the teams other posts (Carly Hornaday, Priscilla Garza and Hailey Silva) played a big role on the court as the season progressed, playing their roles and contributing on both ends of the court.

Villarreal also cited the team’s unselfishness as a key factor to their success. “We’re finally to a point where we are a lot more patient on offense,” said Villarreal. “We like to move the ball; we like to share the ball. They’re looking for each other. It’s pretty basketball.”

As of press time, Pioneer is still awaiting a first round opponent. Brownsville Pace and Edcouch-Elsa will play a tie-breaker game tomorrow at 11 am at Pace High School. The Lady Diamondbacks will play the winner.  One year after losing by one point in the first round to Pace, Coach Villarreal thinks her team will be ready. “They’re hungry. They weren’t happy after last year’s loss. But we’ve grown. I think last year . . . will help us as we proceed.”

The well-established tradition the Lady Patriots have of reaching the postseason under Coach Ralph Cantu Jr. continued in 2020, despite key losses to graduation from 2019. Veterans ended the regular season with a 23-12 record. Their 10-4 district mark was good for third place in District 31-5A.

Two key players that did return from last season, Ronnie Cantu and Kaylee Flores, have each had solid seasons, sharing the load on offense and leading a scrappy defense that rarely gives opponents a chance to relax.

“There’s no other explanation other than the girls have done it,” said Cantu when asked how this year’s team engineered another trip to the postseason.  ”Ronnie and Kaylee have led and the others have steadily been improving.”

“We’ve had a really challenging season”, said Leila DeLeon. “We lost some big players (to graduation) but we’ve all come together.”

Coach Cantu mentioned the inside play of DeLeon, Kelly Garcia and Nyleen Canizalez when describing how the team garnered another top four district finish. “I’d like to mention all twelve (players),” added Cantu. He summed up what it will take to advance in the postseason. “(In) playoff games you have to have a team effort.”

The Lady Patriots will face off in the first round against Valley View Monday February 17 at Mission Veterans High School at 6:30 pm. Ronnie Cantu thinks the tough opponents they faced during district play prepared them for what’s ahead. “I believe that this district season has especially helped us with what we’re going to see in the playoffs and that’s bigger teams. Considering our size, you know we have that heart to play with all we’ve got and to play to win.”

Flores, one of seven seniors on the team, put her perspective on the upcoming postseason. “It’s our last ride. We want to make the best of it.”

The Lady Coyotes are new to the postseason in 2020, having finished third in District 30-6A with a 9-5 record. Overall the team finished the 2020 regular season 21-15. The last Lady Coyotes team to reach the playoffs was in 1998.

The 2019 Lady Coyotes finished sixth in district with a young team and entered 2020 with expectations that this could be the year they broke through.

In an interview from earlier this season coach Juan Luis Gonzalez said the turnaround started before the season. “When we started playing in the summer, we started (saying) “You know what, we can compete.” We started winning a few games and then, all of a sudden you start getting that little confidence. Now we’re not competing, we’re more like; “Hey we got to win,” That’s the biggest difference from last year to this year.”

Some early tournament success and a 5-1 start to district play put the team in great position but two straight losses midway through district found the team tied for third, with only a one game lead over the fifth place team.

Earlier this week, Gonzalez talked about getting past the two losses. “We had to turn it up a little bit.” His team responded, winning four of their next five, to secure their third place finish and the long awaited playoff spot.

“It feels great,” said Viviana Rios about the team’s success. “We are getting a lot of recognition from our own school. Everybody is like “Wow”. “I’m really, really happy that we accomplished what we were working for.”

Next up for the Lady Coyotes is a match-up with Laredo United South on Monday February 17 at Alice High School in Alice at 7:30 pm.

Not yet knowing their playoff opponent at the time, Melady Renteria was confident about the team’s chances. “They’re a basketball team as well, right?” she said. “We can definitely win. I just feel like we can do this.”