Early goals aided both the girls and boys soccer teams of La Joya Juarez-Lincoln High School this past Tuesday night in a pair of wins against La Joya High. The victories also kept both the Lady Huskies and Huskies undefeated two weeks into the start of District 30-6A play.

The Lady Huskies started off the night with a 5-0 victory, improving to 4-0 in district play and 12-1-2 overall. Juarez scored twice early and spent the rest of the night putting constant pressure on the Lady Coyotes defense. 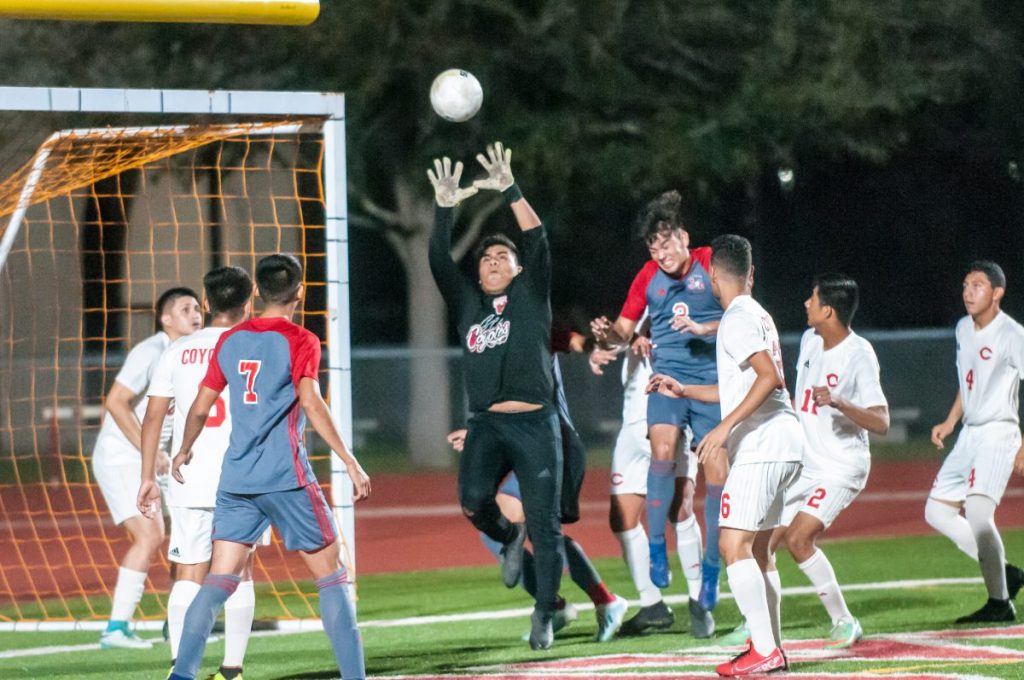 La Joya goal keeper Jose Delgado reaches for the ball just prior to catching it during the early going of the Coyotes’ 3-0 loss to the Juarez-Lincoln Huskies Tuesday, Feb. 11, 2020. Progress Times photo by Luciano Guerra.

Melanie Olivarez scored just five minutes into the game, collecting a pass from Stephanie Jimenez before shooting the ball past the La Joya keeper. She blasted in another four minutes later; collecting the rebound after Caitln Hernandez bounced a shot off the crossbar.

“Getting that early score gives us more confidence to keep going,” said Olivarez.

A Jimenez goal, off of a misplayed clearance, increased the Lady Huskies lead to 3-0 halfway through the first half and Leslie Lopez made it 4-0 fourteen minutes before the break, putting away a loose ball created by a deflection.

The Juarez defense was doing its part too, limiting the space with which La Joya forward Vanessa Ramos had to work. When there was space, goalies Soledad Rios and Keyla Torres were there to scoop up the passes the Lady Coyotes made across the box, often coming off of their lines to do so.

A pair of fouls on Ramos set up La Joya with two first half chances to cut into the lead, but Keyla Mata’s free kick was easily handled by Rios and Olivarez headed out Naidelin Rodriguez’s attempt.

The Lady Huskies stayed aggressive after the break too and broke through again when Deisy Reyes hustled to rebound a Juarez penalty kick that had bounced off the crossbar and getting it past the Lady Coyotes keeper to tally the team’s final score.

Although held scoreless on the night, Lady Huskies midfielder Ashley Segura was a big part of the Juarez attack and talked after the game about her effort. “You can’t give up no matter what. You just got to keep trying and keep pushing harder and harder each game and eventually you’re going to have your game to shine in.”

The Lady Huskies came into 2020 with high expectations following a long run in the postseason a year ago and so far have not disappointed.

Coach Rick Garza talked about the growth he has seen in his group since last season. “Our athletes have definitely matured within their level of play more than anything,” he said. “They’ve been growing closer to one another on the field; understanding each other’s rhythms more than anything, verbally and non-verbally.”

After opening district play with a win over PSJA High, La Joya has dropped their last three district games, albeit to arguably three of the toughest teams in the district (McAllen Memorial, McAllen High, Juarez-Lincoln) to fall to 1-3 in district and 15-5-1 overall. The Lady Coyotes loss to Memorial came from penalty kicks after the game ended tied in regular time.

The Juarez boys’ team benefited from a quick start too. Antonio Torres, fresh off a five goal performance the week before against Mission, put the Huskies up 1-0 just five minutes in when he ran down a high bouncing ball and slipped a shot just inside the far post.

After the game Torres was quick to give others credit for his scoring. “I’m very proud of my team,” said Torres. “If it were not for the team I would not be scoring all these goals; I do it for the team.”

The Coyotes followed with two chances to even the score. Andres Covarrubias broke free on a run but nothing came of it as Huskies goalie Miguel Garza rushed off his line to meet the challenge. The two collided in the box; sending the ball away from goal. A Coyote throw in a short time later allowed Ciro Verdin a chance too, but his header towards the goal was easily stopped.

What followed was a barrage of attacks and shots by the Huskies that eventually broke the Coyotes down. After Torres was fouled, Sergio Escareno drove in a free kick from close to 30 yards out into the lower left corner of the goal to make it 2-0. The lead increased to 3-0 on Alberto Lopez’s long shot that deflected off the Coyotes keeper’s hand before getting across the line twelve minutes before the half.

Garza talked about the win after the game. “Today we just did our best,” said Garza. “I’m just so proud of my team.”

This years’ Juarez team, with fourteen seniors on the roster, looks to be in a position to make another title run in their long history of success.

“It’s the experience,” said Juarez coach Victor Ramos when asked about what his team will need in order to be in contention again. “We’re hoping that will help in the long run.”

All four teams are back in action tonight. Juarez travels to McAllen Memorial for games at 6 pm (girls) and 8 pm (boys). La Joya hosts PSJA North with the same start times.