Faced with what they say is a lack of opportunities for members of the community with disabilities, three women have banded together to create a non-profit dedicated to serving what they call an untapped market.

“We figured it was time to start helping the community with the things we did for our family,” Esmeralda Leal, co-founder of the Disability Chamber of Commerce – RGV said. “It had such a positive outcome and we wanted to share that with the community.” 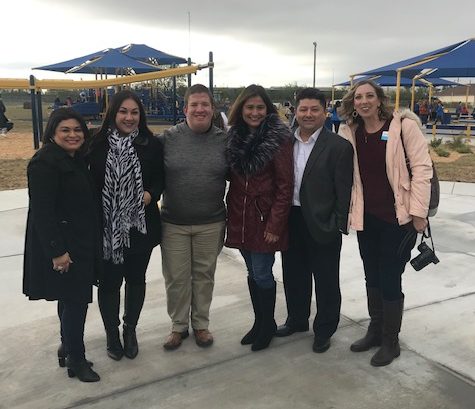 Board members of the Disability Chamber of Commerce – RGV at the grand opening of Hidalgo County’s first ever all-inclusive park Wednesday, Dec. 11, 2019. Courtesy photo.

Leal, along with co-founders and board members Stephanie Wilson and Evelyn Cano, are mothers of children with autism. After being part of the organization Capable Kids Inc., the trio decided it was time to create an organization that raised awareness on those living with disabilities-while helping businesses hire more employees with disabilities.

“The Valley has a lack of resources for adults with disabilities, most of the focus is on helping them while they’re in public school,” Leal explained. “Once they leave high school, there’s really nothing for them besides state supported living centers. In some respects it meets a need but there’s also the need to give them an opportunity to make them productive members of society. That is where we come in. We want business communities to see the value of hiring individuals with different abilities.”

Launched last December, the chamber has been attending events such as last week’s disabilities forum in Edinburg and the opening of the county’s first ever all-inclusive park in the city of Hidalgo. Cano said that the main purpose of the chamber will be to help individuals with disabilities of all backgrounds, including veterans. This is the fourth chamber of its kind in the entire country, Cano said.

“With so many programs geared at those under the age of 18, we wanted something for members of the community with disabilities that affected them once they’re over 18,” Cano said. “We have been helping people with disabilities and their family members by providing educational conferences and offering support. Now we are shifting to focus on the employers because it doesn’t matter how ready someone with a disability is for a job if no one wants to open the door for them to be hired.”

The chamber plans to hold several educational training sessions for businesses on the benefits of hiring an employee with disabilities and accommodation practices for them, among other topics.

“Employers aren’t usually ready to hire someone with a disability because they may be nervous of potential liability, overwhelmed with how they can provide and accommodate them and don’t understand the incentives like tax write offs available to them,” Cano said. “So we want to become the educational component of them feeling confident in hiring them.”

Benefits of being a diverse employer included being looked at positively by the community and hiring someone who will end up being loyal, Cano said.

“There’s not a turnover rate from employees with disabilities because research shows they don’t move from job to job,” Cano explained. “Once they learn that job well they tend not to go anywhere else because they have a job they truly find meaningful. That’s something we need to do, listen to these individuals who have disabilities and ask them what their needs are and what they would like to do. It’s not just about giving them whatever job is available, we want them to do something they are genuinely excited about.”

“When people become a member, we want them to know they are making history and will be part of a legacy,” Cano said. “You aren’t just giving money to a chamber, you will change the lives of a group of people who have been looked down on for a long time.”