It was almost deja vu all over again for the Pioneer Lady Diamondbacks basketball team. Last year Coach Nicole Villarreal’s team entered the bi-district round of the UIL state playoffs as a heavy favorite thanks to their 13-1 district record and their first ever District 31-5A championship. As the No. 1 seed, the Lady Diamondbacks were matched up against District 32-5A’s No. 4 seed, the Brownsville Pace Lady Vikings in the opening round of the post season.

While anything can happen in the playoffs, a No. 4 seed is not supposed to defeat a No. 1 seed. However, that is exactly what happened and whether it was a matter of over confidence on the part of the Lady Diamondbacks, or a matter of the Lady Vikings playing the game of their lives, Pioneer saw their then best season in school history come to a sudden and disappointing end when they fell to Pace by a score of 47-46. 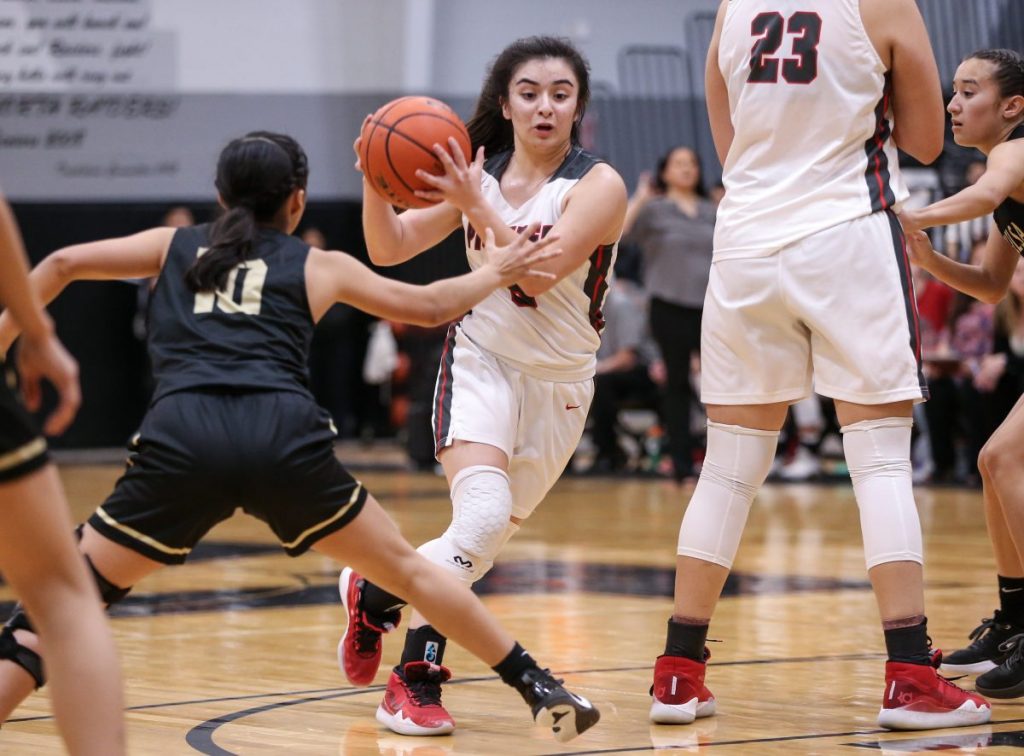 Adelaida Arroyo, #3 Sr. Diamondback, breaks past a defender and works the ball up the middle Monday, Feb. 17, 2020 .Progress Times photo by Mario Magallon.

Now let’s wind the clock forward one year. Entering the bi-district round of the 2020 post season, the Lady Diamondbacks are once again District 31-5A champions, only this time with a 14-0 record. And as was the case last year, they are once again a No. 1 seed and will once again face District 32-5A’s No. 4 seed. Only this time around it’s the Edcouch Elsa Lady Yellow Jackets, who they faced off against Monday at PSJA North High School.

So did history repeat itself once again? Did the Lady Diamondbacks find themselves on the short end of the final score against Edcouch Elsa just as they did against Pace last year or did they play up to their potential and claim their first ever bi-district championship? Fortunately for Villarreal and her girls, this time around, it was the latter.

While the Lady Yellow Jackets did hold the lead at the end of the first quarter (8-6) and at the half (18-15), the Lady Diamondbacks opened the third quarter with eight unanswered points to take the lead for good. And when the fourth quarter game clock ticked down to all zeros, it was the fans in the bleachers on the Pioneer side of the gym, and the girls and coaches on the Pioneer bench, that were celebrating their newly claimed bi-district championship.

Immediately after the game, Villarreal shared how last year’s bi-district round loss helped motivate her team this year.

“We definitely had a bad taste in our mouths after last year’s loss to Pace. It motivated us to work harder this year and this win tonight is a result of that hard work.”

When asked what having gone 27-1 in district play over the past two seasons says about her girls, Villarreal said, “It’s a sign of how much we’ve grown as a team. It shows that my girls believe in the process and that their commitment level has definitely risen. They know what work is and they’ve been doing a really good job of putting the work in.”

As for what kind of adjustments she and her players had to make in the second half to turn the game around, Villarreal said, “We needed to slow it down, get into our spots and not let them rattle us. We’re still a young team and with Edcouch coming out firing the way they did, our lack of experience hurt us in the first half.”

Pioneer senior point guard Adelaida Arroyo scored eight of the Lady Diamondbacks points, all in the fourth quarter. Despite the fact that the Lady Yellow Jackets were leading at half time, Arroyo was confident in her team’s ability to come from behind.

“We knew that we could do better in the second half,” Arroyo said. “We have the type of team that never gives up no matter the circumstances.”

When asked what having an undefeated district record and claiming the first b-district championship in her senior season means to her, Arroyo said, “They’re great accomplishments. I’ve been here since my freshman year and the program has really grown. I’m glad that I’ve been able to be part of that growth.”

Pioneer’s top scorer Monday night was sophomore Jordan Bravo. She put 15 points on the scoreboard, nine of which came on back-to-back-to-back three-pointers in the third quarter.

Like Arroyo, Bravo was not too concerned about their slow start against the Lady Yellow Jackets.

“I knew that we could turn things around,” Bravo said. “We were just a little nervous in the beginning and we just needed somebody to push us and get us on the right track.”

Pioneer senior guard Alexia Hernandez may have only scored two points on the night, but she has averaged over six and a half points and six rebounds per game this season.

When asked what having such a successful season and being part of Pioneer school history means to her, Alexia said, “It honestly feels totally awesome. Being a member of the team that made school history and being that it is my final year makes it mean that much more. Now I’m hoping that we can have a deep run in the playoffs.”

Whether or not the 2019-2020 Lady Diamondbacks will add an area championship to their list of accomplishments this season has already been decided. That is because their area round playoff game against the Corpus Christi Veterans Memorial Lady Eagles was scheduled to be played last night at Texas A & M Kingsville.

The other Big 7 girls’ basketball team to claim a bi-district championship this week was the Mission Veterans Lady Patriots. They defeated the Valley View Lady Tigers at home Monday night by a score of 36-32. With that win, the Lady Patriots, who posted a 10-4 District 31-5A record this season, improved their overall record to 24-12.

Top scorers for Mission Vets against Valley View were seniors Kaylee Flores with 18 points and Ronnie Cantu with 11 points.

Coach Rafael Cantu Jr’s Lady Patriots will be facing off against the Flour Bluff Lady Hornets in the area round of the state playoffs tonight at 6 at Texas A & M Kingsville.

As for the La Joya Lady Coyotes, the only other Big 7 girls’ basketball team to qualify for the playoffs, their season came to an end Monday night when they fell to Laredo United South by a score of 63-36.