It didn’t take long for the five starters of the Sharyland Pioneer boys’ basketball team to get it rolling this past Monday night at Pioneer High School. Before it was over the rest of the squad showed what it could do too. The end result was an 85-57 victory for the District 31-5A champions over the Mercedes Tigers in the opening round of the 2020 UIL State Basketball playoffs. With the win, the Diamondbacks improved to 26-7 on the year.

Paced by Derek Luna and some aggressive defending, the Diamondbacks jumped out to an early lead against the visiting Tigers.  Luna had 10 first quarter points for Pioneer and every other starter scored in the period, putting the Diamondbacks up 23-11 at the end of the first. By the half it was 41-18 thanks to a 15-3 run to close out the second quarter, with Luna contributing 10 more.  All but five of Pioneer’s first half points came from the starting five. 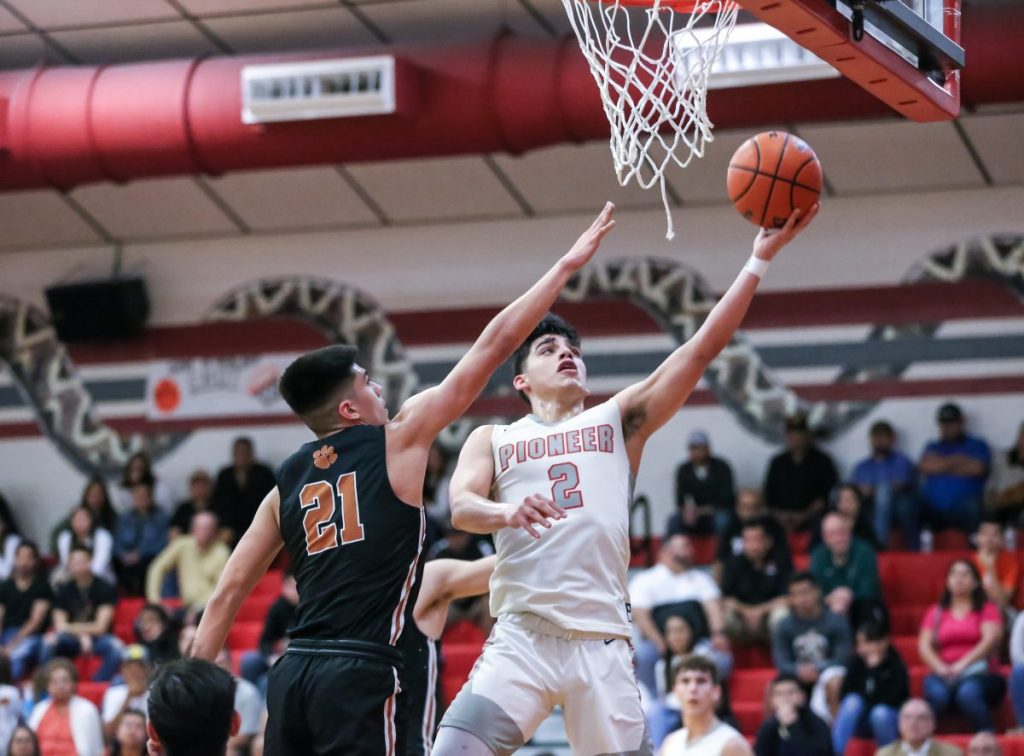 The Sharyland Pioneer Diamondbacks got 20 first half points from Derek Luna to spark the District 31-5A Champions to a 85-57 win over Mercedes in the first round of the 2020 UIL boys basketball playoffs Monday, February 24, 2020.Progress Times photo by: Mario Magallon.

Luna contributed 20 points in the first half to help fuel the Diamondbacks. “It was just instinct,” said Luna about his aggressive approach on the offensive end of the court. “Knowing if we don’t win this one, we don’t have a next one. I had to do what I had to do for my team.” He finished the night with 26 points, on 13 for 19 shooting, mostly the result of beating his man off the dribble and getting to the rim to finish.

The third quarter saw the Diamondbacks increase their lead to 34, with the starting five again doing most of the work, scoring 17 of the team’s 24 third quarter points. The team’s reserves kept the crowd going in the fourth with 20 points sparked by hard work on the defensive end and unselfish, crisp passing on the offensive end for some easy buckets.

Besides Luna no other Diamondback scored more than nine, but 11 players (including Luna) contributed to the night’s final tally of 85. Everyone on this team plays defense too. Despite their total of 57, the Tigers only had 31 points going into the fourth.

Now comes the hard part. The area round of the playoffs has not been kind to Diamondbacks basketball.  In their six seasons the Diamondbacks have a perfect 4-0 record in bi-district playoff games but are 0-3 in the area round. Experience could be the key this year.

Four of the starting five are seniors and know about playing in the post season.  Lavar Lindo, Ethan Lee and Luke Padilla were part of the postseason magic that saw Pioneer advance to the third round of the playoffs on the football field last fall. Junior Miguel Angel Gonzalez was part of last year’s team that advanced to the second round on the court. And then there is Luna, who was part of Duncanville High’s 2019 6A state championship team.

How will all that experience help?

“I know how to help my teammates improve and get better,” said Lindo. “They do the same for me. We just bring the same energy from the field to the court.”

Gonzalez shared his thoughts on how to be ready for round two. “Just stay focused, keep pushing, keep grinding. Just listen to what our coaches say and work as one unit.”

The Diamondbacks will next face Corpus Christi Miller, the team that eliminated them last year. The game is scheduled for tomorrow afternoon at Alice High School in Alice.  Tip off will be at 3:00 pm.

Pioneer coach Rene Gonzalez is very aware of his team’s past history in the second round and getting ready for tonight’s game. “Same here,” he said when asked about the “unfinished business” mantra used by the Diamondbacks football team last fall. “We got bounced out by Miller last year; they (his players) know what’s at stake.”

The Patriots won their first round game this past Tuesday night in Brownsville against Brownsville Pace, 63-51, improving to 20-16 on the year. Jacob Arenas contributed 22 points in the win and AJ Gonzaque added 20.

Next up for Vets is an area round game against Laredo Martin tonight at Zapata High School in Zapata. Tip-off is scheduled for 7:00 pm.

Things did not go as well for the other two boy’s teams from the Big 7 in their opening round games this past Tuesday night.

In Brownsville, La Joya Palmview gave District 32-5A champion Brownsville Veterans everything they could handle before a late three pointer for the Chargers lifted them past the Lobos in overtime 61-59. Irving Gamez (26 points) and Gerson Ramos (13) led the effort for the Lobos, who finished the year 21-15.

In Laredo, the Coyotes held a one point lead at halftime against District 29-6A champion Laredo United before falling 64-40. Berni Vera led the Coyotes with 12 points on the night while Santi Rodriguez contributed eight. La Joya finished the year 20-16.