New subdivision in Mission to be named after fallen police officer

Last Saturday, Affordable Homes of South Texas, Inc., along with the city of Mission, held a groundbreaking ceremony for a new subdivision to be built at the corner of 2 Mile Line and Holland Ave. The subdivision, which will be called Speedy Trails, got its name from the fallen police corporal, who left behind his wife of 21 years, Roberta “Bobbie” Espericueta, and their children Brianna and Joaquin. 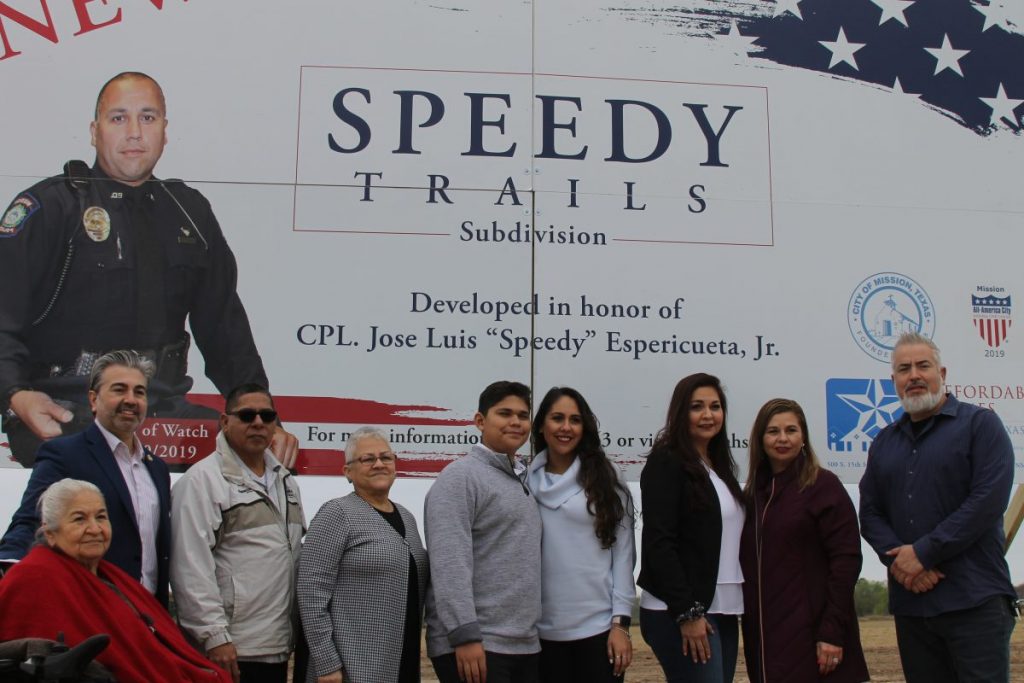 The family of fallen Police Corporal Jose Luis “Speedy” Espericueta at the groundbreaking ceremony for a new subdivision in Mission to be named in his honor Saturday, Feb. 22, 2020. Progress Times photo by Jamie Treviño.

“I would like to thank God for His never-ending grace before, during and after what has been the toughest times in our lives,” Bobbie Espericueta said at the groundbreaking. “I know Joey is smiling from ear to ear right now with that big, beautiful smile he had.”

Espericueta, who served the Mission Police Department for 13 years, was killed in the line of duty while chasing an armed suspect on Thursday, June 20, 2019. His family and friends were at the event, sharing memories and stories of the late corporal.

Bobbie Espericueta noted that support from the community has helped since Speedy’s passing.

“This has been a very difficult year for us, but because of you and many across the nation, we continue to feel loved and supported,” Bobbie Espericueta said. “We’ve been strong because of God. Lastly, I want to leave with a scripture that has helped me on my journey. Joshua 1:9 says, ‘Be strong and courageous, do not be afraid, or discouraged, for the Lord your God is with you, wherever you go.’”

“Things are changing in Mission,” O’caña said. “They’re changing for the better. We want Mission to continue to be the place to be.”

Lorena Castillo, the Board Vice President of Affordable Homes of South Texas, Inc., said that when it came time to name the new subdivision (the first built by the company to be located in Mission), the choice was clear.

“Once developed, this subdivision will provide approximately 60 families with beautiful, safe, decent, quality, affordable homes,” Castillo said. “While we continue to crunch the numbers, and don’t have any cost estimates yet, we anticipate that – like we’ve done for the last 40 plus years, the payments for the families living in this neighborhood will be less than the typical rent.”

There is still plenty of work to be done before work begins on the development, but Castillo said they wanted to take the opportunity to have this celebration this month while many members of his family were in town.

Affordable Homes of South Texas, Inc. is a 43-year-old non-profit organization that develops subdivisions, acts as a homebuilder and is a mortgage company. They have a HUD council program, and Castillo said they were unique because they focus on low- to moderate-income families.

“We’ve wanted to provide our products and services to the Mission community for many years,” Castillo said.

Victor De Leon, Bobbie’s brother, represented the family in interviews. He recalled when they all found out a subdivision was being named after Speedy, and said they could not be more thankful he was being remembered in this way.

“This is huge, this is great,” De Leon said. “It just cements what we already knew, which is his impact on the community, his footprint that he left on many people’s lives beyond the city of Mission.”

De Leon said the family was honored to have Speedy commemorated in this way.

“You hear people say ‘it takes a village,’ and that can be applied to many different things,” De Leon said. “It could not be more true in this case, when a loved one is lost – a loved one that meant so much to the community and had such a tremendous impact. The community has never left my family’s side, and we are forever indebted and grateful to them for that.”

The Espericueta family has received an outpouring of support locally, at the state level, nationally and internationally – getting letters, cards and emails.

“It speaks to who he was, and the legacy and memory he leaves behind,” De Leon said. “It means the world.”

Mission police Chief Robert Dominguez spoke on the legacy Espericueta is leaving behind, and expressed gratitude that an officer was being memorialized by so many.

“If you look at what was here and what is coming, it’s a beautiful thing to see,” Dominguez said. “As it bears his name, our hero, there will be generations of people who grow up in this subdivision, people in our community who will pass and see his name etched in stone at the entrance and the generations of police officers to come as members of the Mission Police Department.”

Dominguez said that first and foremost, Espericueta was a great person.

“He was the type of leader that I brought into my office all the time when I was in crisis, usually it was some type of accident report,” Dominguez said, speaking on Espericeuta’s charisma. “He had that ability to talk to people, calm people down and explain situations. As a leader, his men followed him all the time. I’ve never heard anything negative about him, because he was open and had an ability to lead first with compassion – for his fellow officers and the public that he served.”

Dominguez described thinking of Espericueta just the other day and breaking down.

“We must never forget him,” Dominguez said. “We will never forget who he was and what he represented not only for our department, but our community as well.”