With the sun beating down on her, Kayla Montano walked door-to-door in an Alton neighborhood and knocked on each of the doors. If no one answered, she and Alton city administrators and members of the non-profit La Union del Pueblo Entero left behind a pamphlet. If someone answered, the LUPE community outreach specialist had one question for them:

“How familiar are you with the upcoming census?” 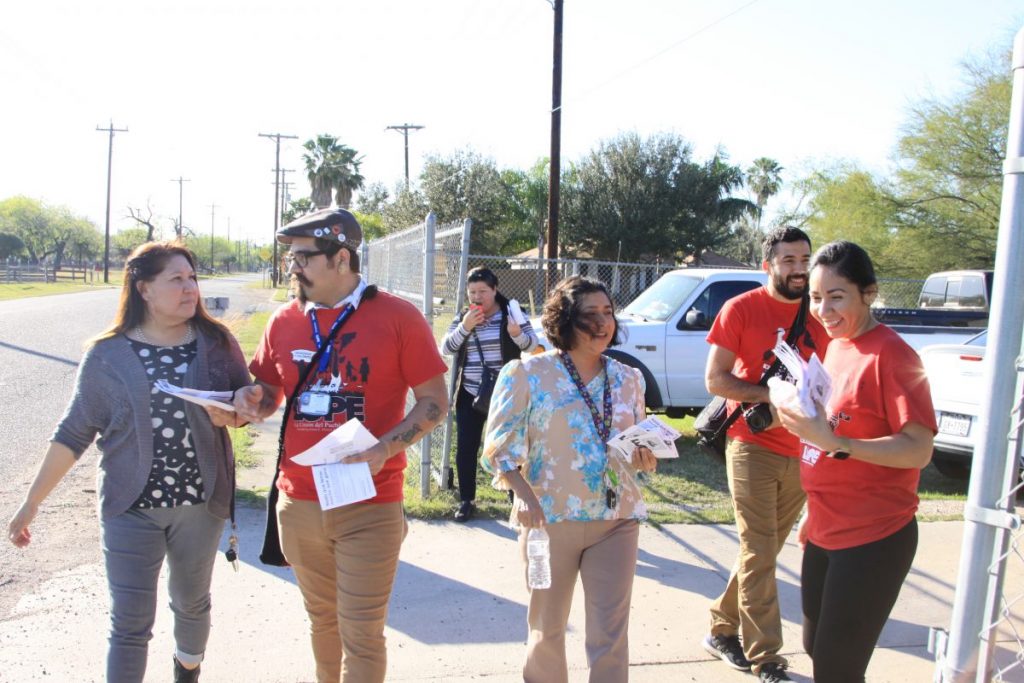 Montano joined nearly two dozen other community members in the block walking event held late last month. Members of Lupe and Alton city administrators teamed up to go to Alton residents near 4 Mile Line and Bryan Road to inform the nearly 400 residents in the area of the census.

“This area was undercounted by as much as 75 percent in the 2010 census so we’re trying to make sure all these people get the idea that they should get counted,” Marco Antonio Lopez, a LUPE community organizer explained. “We’ve been hearing that these people just weren’t visited by census takers.”

The census is done every 10 years by the U.S. Census Bureau to count every individual living in the country. By next week, the department will mail out information on how to respond to the census to households across the country by phone, mail or online.

According to Lopez, every city receives thousands of dollars in federal funding per resident, which can go toward building better infrastructure for underprivileged communities.

“Door to door is a better way to come out and meet our neighbors and promote the census,” Lopez said. “A lot who said they weren’t counted at the previous census were looking forward to making sure they were counted this time. We are planning to come back to this neighborhood later this month to reach the homes that didn’t respond to us and we will also have a census fiesta on March 19 at the Alton Recreational Center to promote the census.”

Among the residents who answered the door to the block walk event was Juan Zarzosa, 66. Zarzosa said he plans to participate in the census but noticed that there are concerns among his neighbors about it.

“There are fears as to what questions will be on there and how the responses will affect them and if they will be used against them,” Zarzosa explained. “It prevents people from knowing more about the census or even answering the door when people are sharing information about it.”

Last year, the Trump administration attempted to include a question on the census about an individual’s citizenship status before the U.S. Supreme Court ruled it unconstitutional.

According to an article last month from the political news site Politico, the census bureau is spending $500 million in an advertising campaign to fight back rumors of the citizenship question being used.

According to the census website, the answers are kept confidential and are not shared with other departments or agencies and will never ask personal information such as social security numbers or bank account information.

“I understand why it’s happening, but people need to be informed and these types of visits help,” Zarzosa said. “Something like this door to door visit is helpful and more cities and organizations need to find a way to make sure everyone knows about this. We want a good result from the census to make sure it works. The more people and organizations do this, then this will get a 100 percent response rate. They are doing the work.”

Among the Alton city department heads at the block walking event were City Manager Jeff Underwood who said the collaborative effort between the city and LUPE will help improve participation in the census.

“My idea of getting the directors involved was to get citizens to see how important this census is to the city; it’s important to all of us,” Underwood said. “There’s nothing better than a face to face conversation where we put something in their hands and tell them how it affects them and the city and schools they’re in. It’s a direct message to them if they didn’t see a sign or commercial, we’re making sure they get noted anyway.”