The 2020 district soccer season is wrapping up in the next week with a number of Big 7 teams having already qualified for the playoffs and many others still in the hunt.  Two Big 7 teams are still unbeaten in district play and if everything falls into place all four district champions (30-6A Boys, 30-6A Girls, 31-5A Boys, 31-5A Girls), could be squads from the Big 7. Here is where the district races currently stand. 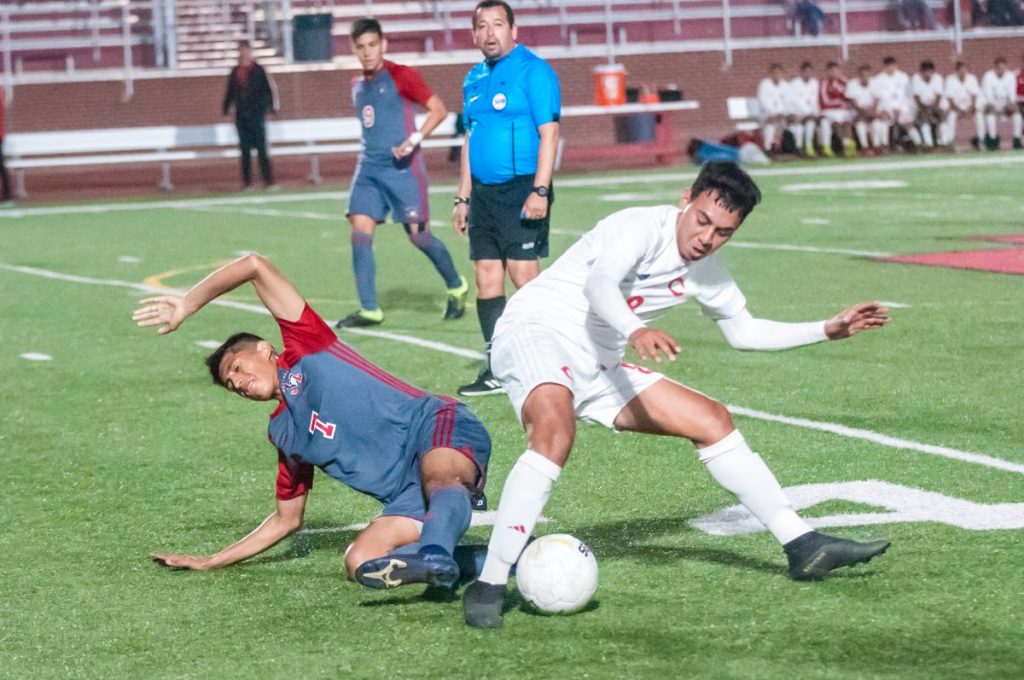 La Joya’s Oscar Quintana Mendoza and Juarez-Lincoln’s Jorge Reyes collide as they both go for the ball during the first half of the Huskies’ 3-0 win over the Coyotes.Progress Times photo by Luciano Guerra.

One of the two Big 7 teams currently unbeaten in district play, La Joya Juarez-Lincoln, stands alone atop District 30-6A at 10-0, good for 30 points.

Many soccer districts go beyond just wins and losses in determining a team’s place in the standings and award points for a team’s games, depending on the result. A regulation time win is good for three points, a regulation loss gets you zero. Soccer is a sport, however, where games can often end tied after two 40 minute periods. This year alone, all but two of the Big 7 soccer squads have had a district game end tied after regulation time. When that happens the two teams decide the winner via a penalty kick shootout with each team sending up five players in alternating fashion to take a penalty shot.   If the teams remain tied after the initial five kicks, the shootout continues until one team gets a goal and a stop, or vice versa. The team with the most successful kicks is declared the winner and receives two points in the district standings for the win. The loser gets one.

The Huskies next two games, however, do come against teams fighting to keep themselves in the post season picture. Juarez plays La Joya tonight and McAllen Memorial Tuesday.

The Coyotes are currently tied for the number four spot in the district standings with 19 points from a 6-4 record. After a 2-2 start La Joya has won four of their last six.

With just four games left in the district schedule, La Joya must still contend with Juarez (tonight) and two other playoff contenders (McAllen Rowe, Mission High) before the season ends.

The season finale between La Joya and Mission could be a big one if the Eagles can gain some ground between now and then. Their loss to Juarez this past Tuesday dropped them to 5-5 on the season with 14 points.  Still the Eagles are in fifth place in the standings, five points out of fourth.

Before the La Joya game to end the regular season, the Eagles must find a way to get past fellow playoff contender McAllen Rowe as well next week.

The other Big 7 school without a blemish during district play are the Rattlers of Sharyland High, who sit atop District 31-5A at 11-0 (33 points).

Much like Juarez, the Rattlers have dominated most of their 31-5A opponents, winning 10 of their 11 games by three or more goals; outscoring their opponents 49-7. They have yet to allow an opponent more than one goal.

After their game with Mission Veterans tonight, the Rattlers end the season facing off against two other playoff contenders (PSJA SW, PSJA Memorial).

La Joya Palmview (4-7) and Sharyland Pioneer (3-8) are currently tied for fifth with 11 points each, three points out of fourth. The Lobos close out the season with games against Roma tonight and next week against Rio Grande City and PSJA Southwest; all of whom are also still vying for playoff spots. The Diamondbacks face three contenders to close out the regular season in PSJA Memorial, Roma and Rio.

The District 30-6A girl’s race has been a back and forth affair with three teams clustered tightly together at the top of the standings and two more doing battle for the final playoff spot.

The Lady Huskies of La Joya Juarez-Lincoln currently reside in third place with 25 points with their 8-2 record, just behind McAllen Memorial (28 points) and McAllen High (26 points). Juarez lost to Memorial in the first round 5-4 but bounced back just a few days later with a 2-1 win over McHi. The team’s other seven district wins have all been by three or more goals.

The log jam at the top pf the district standings will eventually be settled as all three of the top teams still play each other one more time. Juarez plays Memorial and McHi next week and still has to contend with La Joya tonight before finishing the season against PSJA High.

The Lady Coyotes (4-6, 11 points) sit in fifth place in the district standings, six points out of fourth with four games to play. Two of those games are against tough opponents who beat the Lady Coyotes in the first round and are above them in the standings. La Joya squares off with Juarez tonight and McAllen Rowe next Friday.

Last but not least are the Big 7 girls teams from District 31-5A. Three of the top four spots in the standings are currently held by Big 7 schools.

The Lady Diamondbacks avenged a first round 4-0 defeat to Sharyland High with a late game rally over the Lady Rattlers last Friday to win 2-1, propelling them into first place. Pioneer has currently won eight straight.

The Lady Rattlers had previously been in control of the district race, posting six wins with six shutouts to start the schedule before losing to Memorial in a shootout two weeks ago and the loss to Pioneer last Friday.

Both the Lady Diamondbacks and Lady Rattlers have to deal with PSJA Memorial once more each before the season ends. Pioneer faces Memorial tonight and Sharyland sees the Lady Wolverines next Friday. Sharyland also has Mission Vets to contend with.

That might not have been a concern a few weeks ago but the Lady Patriots of Mission Veterans have staged a rally of their own to get back into the playoff picture. Veterans started district play 1-5 with three of the losses coming via penalty shootouts and a fourth by just a goal.  They have since won four of their last five to get in the mix, losing only to Pioneer this past Tuesday in a shootout.

Veterans has games remaining with Sharyland High tonight and PSJA Memorial next Tuesday before ending the regular season at Roma.

Don’t count out La Joya Palmview yet either. Should Veterans slip it may be the Lady Lobos (5-6, 14 points) that take advantage of it. They go on the road tonight to face Roma, a team they lost to in a shootout earlier in the season and then finish with Rio Grande City and PSJA Southwest to close out the season. Palmview recorded shutout victories over each during the first round of district play.