Down by four points early in the third quarter, the Sharyland Pioneer boys’ basketball team went on a 19-6 run over the rest of the third and into the fourth to take control of their 5A Region IV quarter-final game versus Corpus Christi Veterans Memorial at La Feria High School this past Tuesday night, propelling the Diamondbacks to a 71-58 win, their 28th of the season. 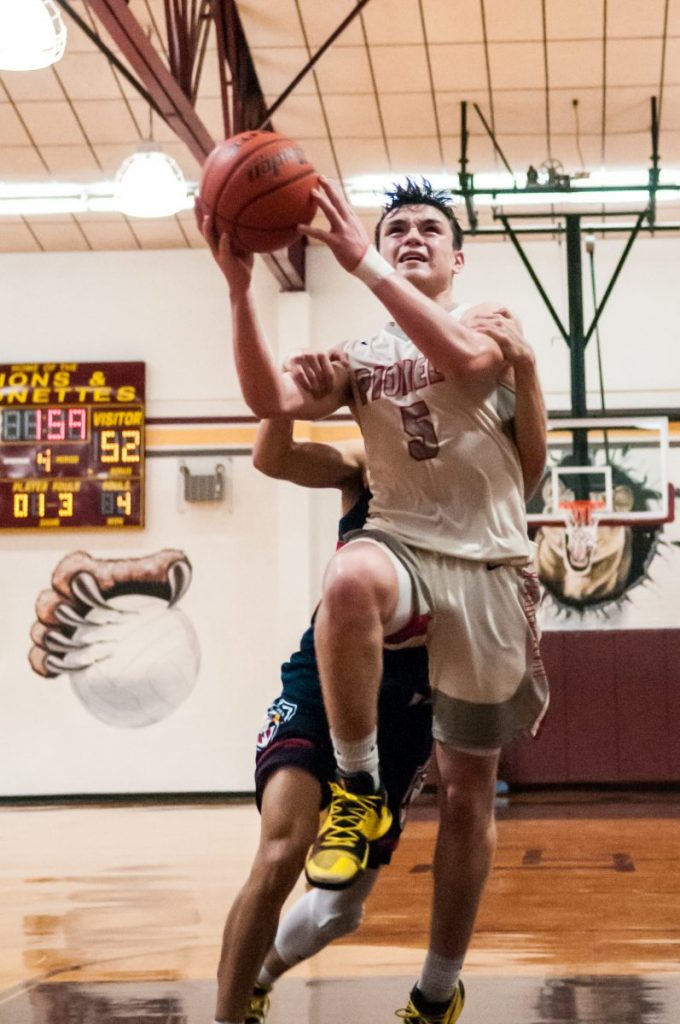 Pioneer’s Miguel Angel Gonzalez is fouled as he goes up for a layup during the fourth quarter of the Diamondbacks’ 71-58 Region IV semifinal win over Corpus Christi Veterans Memorial Tuesday night. Progress Times photo by Luciano Guerra.

It was the third double digit victory in the postseason for Pioneer and represents the farthest the team has ever advanced. The Diamondbacks formula for winning has mixed in big scoring nights from one player, key contributions from several others, defense from everyone and a coaching staff that has them playing hard for four quarters, no matter what the score.

Opponents of the Diamondbacks have had to contend with the team’s fast starts and dominating third quarter play during Pioneer’s playoff run. The numbers tell the story.

Mercedes trailed to the Diamondbacks by 12 after the first quarter in the opening round of the playoffs and went into the fourth down by 34. Pioneer won the contest 85-57. After having their 12 point first quarter lead cut to eight by halftime against Corpus Christi Miller last Saturday, Pioneer outscored the Buccaneers by 11 points in the first eight minutes after the break, advancing with an 88-57 win. Tuesday night against Veterans was more of the same. Pioneer led by 10 near the end of the first quarter but Diamondbacks’ turnovers and fouls allowed the Eagles to get back into the game, cutting the lead to one by the half and going  up by that four point margin early in the third. That’s when Derek Luna and his teammates took control, turning the deficit into a seven point lead by the end of the quarter. Veterans would never get closer.

Luna contributed nine points during the decisive third quarter run against Veterans and totaled 27 for the night. That followed his 28 point performance against Miller last week and his 26 point game against Mercedes.  Luna is doing his damage even though he faces opponents focused on trying to hold him in check.

Luna has seen this before and talked about how he deals with it. “Mainly just stay patient,” he said.   “I know (to) just let the game come to me.”

The Diamondbacks didn’t just get help from Luna either. When early foul trouble sent two starters to the bench for the second quarter others stepped in to help keep Pioneer in front.

“The guys coming off the bench, they’ve been there before. They know they need to step up,” said Pioneer Coach Rene Gonzalez. “I always tell them the level of talent doesn’t go down and the intensity stays up at all times. The bench was great today.”

Reserves Eddie Lee Marburger and Darik Briseno were a big part of the reason the team held it together during the second quarter. The two contributed eight of the team’s 11 second quarter points to keep the Diamondbacks up by one at the break. Marburger added six rebounds, a steal, an assist and a blocked shot as well during the quarter.

Marburger downplayed his contributions. “Everyone has a role on this team,” said Marburger. “Everyone did very well today. My teammates just put me in the best situation.”

Veterans made one last run at the Diamondbacks in the fourth but every score was answered in kind by a different Pioneer player. A Luke Padilla three pointer stretched the Diamondbacks lead to 10 and another from Miguel Angel Gonzalez increased it to 11. A final 7-1 run, started by a Lavar Lindo basket with just under three minutes to play put the game out of reach. Gonzalez added three free throws to end the night with 14 points, while Luna added six more to close out the scoring.

The Diamondbacks bench has some non-players who contribute too.  Gonzalez credited assistant coaches Fernando Rodriguez, Alexis Pena, Bobby Olvera and Jordan Lee for the work they do. “Those guys are amazing,” said Gonzalez.

Credit guys too, like seniors Padilla and Lindo, starters for three years, for staying ready to contribute even when they are not playing.

“When I’m on the sidelines I got to stay in the game and cheer on my teammates,” said Lindo. “I know they’re going to hold the fort down for me to go back in and help them out as much as I can.”

Padilla talked about what he tried to do when he got back in to the contest Tuesday. “Keep (the) energy high, keep the same intensity and don’t back down.”

While speaking of his own efforts, Padilla perhaps summed up with three words what this team is all about from the first five to the last guy off the bench. “Never let up.”

Trust me, these guys don’t.