Xozhitl Herrera watched from the sidelines as her 12-year-old son dribbled a ball and attempted to shoot it into the basketball hoop, making three successful attempts.

“It’s important for Vandelei to participate in sports,” Herrera said of her son. “He has Down Syndrome but he doesn’t let that stop him from wanting to be an athlete.” 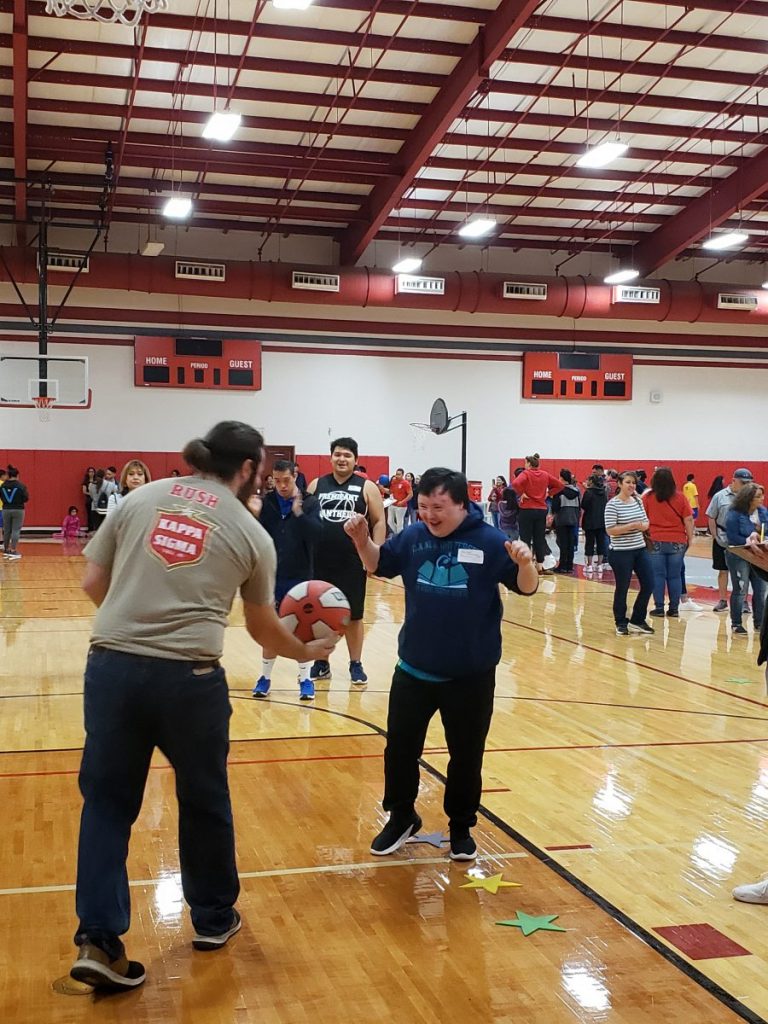 Vandelei, 12, was one of 1,050 people competing in the basketball area meet hosted by the Special Olympics Texas non-profit.

The local organization, which allows kids with intellectual disabilities to compete in athletic events, held the area meet Saturday, Feb. 29 at Sharyland Pioneer High School. Out of more than 1,000 people competing around 50 will move on to the state competition happening later this month in the cities of Mansfield, Grapevine and Frisco.

“Vandelei has been competing here for three years and also does the baseball and bowling competitions and we’re supporting him,” Herrera said. “This way we can watch him do something he loves while he’s around people like him.”

The 1,050 athletes competing ranged from the ages of 5 to 67 as it is open to people from all over the Rio Grande Valley. Athletes qualify through their diagnosis of an intellectual disability from their diagnostician or from being part of the special needs program from their school district.

School districts such as Sharyland and those from the cities of La Joya, Edinburg, San Juan, McAllen and more participated.

According to Ytszel Trinidad Ruiz, a program associate for Special Olympics Texas, the basketball area meet usually brings in about 800 athletes. The increase this year was due to lowering the age of people eligible to compete from eight to five.

“It opens up the opportunity for the younger athletes we have to get exposed to this sport at an early age,” Ruiz said. “We may have to look at other places to host the event due to space and availability next year.”

During the event, the athletes are broken up by their gender and compete in three individual skills competitions for dribbling, passing and shooting in their age and ability level from an 8 foot to 10 foot goal.

“They’re competing to be the top notch of their level, they have the opportunity to qualify and compete at state,” Ruiz added.

“Research has shown that those with intellectual disabilities have a higher rate of dying before they hit the age of 60, so if we introduce a healthy lifestyle to them while they’re young we can extend their lives,” Ruiz said. “We feel it is viable to offer these events for our individuals in the Valley because they are not included with the general education with physical education so they can get an early start with a healthy lifestyle.”

Free health screenings were also offered to athletes at the event. According to Ruiz, Special Olympics Texas offers a program to local school districts that eases in people with intellectual disabilities to school fine arts programs and in sports.

“It’s important to ensure these individuals are being included in other activities and we’ve always gotten such an enthusiastic response from them,” Ruiz said. “The reaction from parents is always that they’re thankful we offer this for their child because if it wasn’t for Special Olympics Texas, they wouldn’t have that opportunity to participate in basketball, soccer, track and field.”

Upcoming special Olympics Texas events include a soccer area meet in Edinburg Saturday, March 28 and a track and field meet next month.