Ronnie Cantu will be continuing her academic and athletic career at the next level after graduating.

Last Thurs. March 5 Cantu, a senior at Veterans Memorial High School who excelled in basketball and volleyball, signed a letter of intent to play basketball for St. Edward’s University in Austin. Cantu, the daughter of Coach Rafael Cantu, Jr. and granddaughter of former Mission CISD Superintendent Rafael Cantu, was surrounded by family and friends as she made her commitment. 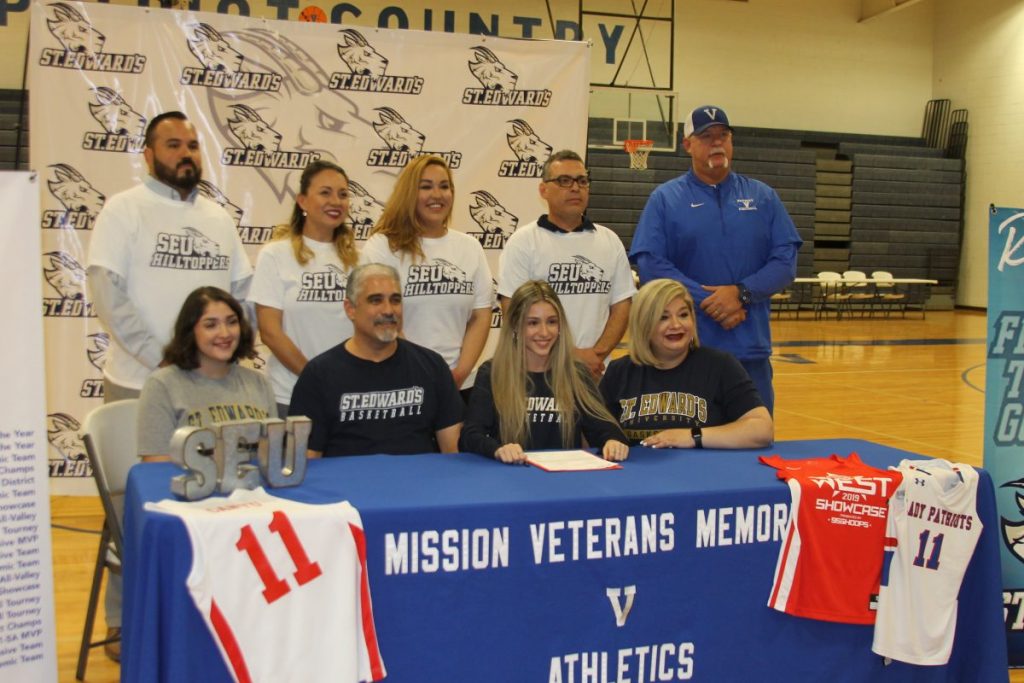 Ronnie Cantu will be playing basketball as a Hilltopper next fall. Progress Times photo by Jamie Treviño.

VMHS Athletic Coordinator David Gilpin said he has known her family for a long time, and expressed pride in her ability as a coordinator, cheerleader and family friend.

“She represents our school, and that’s a neat thing,” Gilpin said. “This is a Division 2 scholarship, she’s going to a big-time university.”

Volleyball Coach Diana Lerma congratulated Ronnie, leading the gym of peers and teammates in a chant of her name. She highlighted Ronnie’s accomplishments as a player and student.

“We can stay here and talk all day about the rare athletes that come through our program,” Lerma said. “Ronnie has been in our program for four years, and it’s unheard of – she’s one of five athletes who has accomplished the goal of being a captain and having a 60-0 record, she made it happen.”

Lerma added that Cantu could have also gotten a scholarship in volleyball, and that she chose basketball.

“We are excited that she’s one of our own,” Lerma said. “We’re always sad that they have to go to bigger and better things, but they’re going to represent us in all their endeavors. We’re so proud of her.”

Her father, Coach Cantu, had a speech prepared on ten index cards, but decided not to read it after seeing just how large the turnout was.

“All I can think about standing here is how grateful and humbled I am,” Cantu said. “I’m awed by this, and I’m grateful for all of you here today.”

Looking at his daughter’s peers, Cantu said he saw the hope everyone has for their players and children.

“This is truly a dream come true for our families,” Cantu said, thanking everyone in their family for their continuous support. “We are humbled, happy and lucky to be standing here.”

According to him, Ronnie is the first person to say that nothing is accomplished alone.