Editor’s note: After this article was sent to press, UIL announced they had extended its suspension of all UIL athletic events until Monday, May 4.

In the midst of the uncertainty currently surrounding almost every aspect of daily life in this country it would be remiss to just forget about the accomplishments of our local high school soccer teams who, for the most part, wrapped up regular season play last week.

Of the fourteen teams who started play in January in the four UIL districts we cover, three were won by squads from the Big 7. Another five placed fourth or better, ensuring them a spot in the postseason. That means exactly half of the teams who made, or will make, the postseason this year from the four districts that are part of our coverage area came from Big 7 teams. There were also a number of outstanding individual efforts to remember as well. 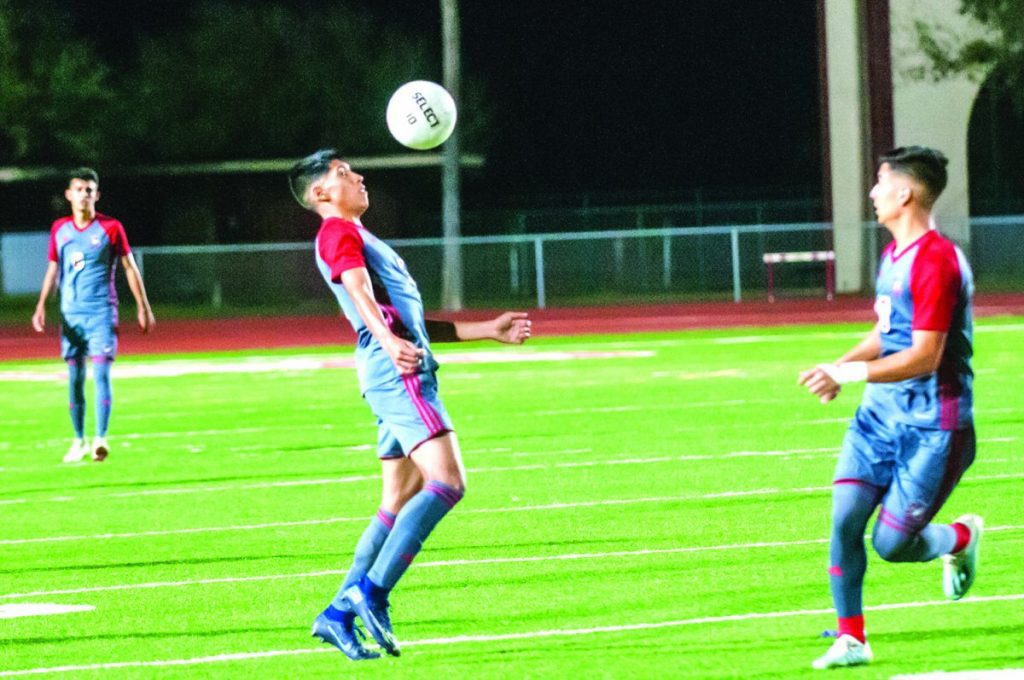 Juarez-Lincoln senior Jorge Reyes prepares to hit a header during the second half of the Huskies’ 3-0 District 30-6A victory over the La Joya Coyotes last month. Progress Times photo by Luciano Guerra.

The La Joya Juarez-Lincoln boys’ team currently sits atop the District 30-6A standings at 13-0. The UIL suspension of contests last week came with one regular season game left to play but, regardless of how this plays out; the Huskies will win the district title.

This year marks the team’s fourth straight district title and 12th straight playoff appearance. The squad has won 29 straight district games to date. The team starts nine seniors and two of them, Johan Arevalo and Sergio Escareno, have played on the varsity for four years.

Head coach Victor Ramos commented about how the team’s experience has contributed to their success. “They know what it takes to get to the next level.”

In their 13 wins the Huskies won 12 games by two or more goals, recorded five shutouts and gave up only one goal in six other contests.  The Huskies are led on offense by Antonio Torres, who has so far scored 30 goals for the team in district play,

The boys’ team at Sharyland High closed out the District 31-5A regular season last week winning their second straight district title, going 14-0 in the process. This year marks the 20th time the Rattlers have reached the playoffs in the 21 years that Coach Reveriano Hernandez has directed the program.

Much like the Huskies, the Rattlers were a force both offensively and defensively, winning 12 of their district games by three or more goals apiece and never allowing more than one goal in any district contest.

The Lady Rattlers of Sharyland High survived a back and forth route to win the girls’ 31-5A title with a record of 12-2, one point better than Sharyland Pioneer. The Lady Diamondbacks finished with an identical 12-2 mark but one of their victories came via a penalty kick shootout, earning the team only two points instead of the three given for a regulation time victory. The two teams split their head-to-head matches during the course of the season.

The Lady Rattlers were in control of the district race for most of the season but fell out of the top spot when they lost to the Lady Diamondbacks in late February. They ended the year in impressive fashion to regain the title, winning their last four games by a combined score of 27-0, in what Coach Mario Ribera thought was going to be a rebuilding year.

The team is made up of mostly freshmen and sophomores but throughout the fall and into the start of the season Ribera saw a team that could be productive. His view was reinforced by two tournament wins in January. Even that late game, late season loss to Pioneer didn’t deter him or his players. “It reassured us that we were doing well,” said Ribera. 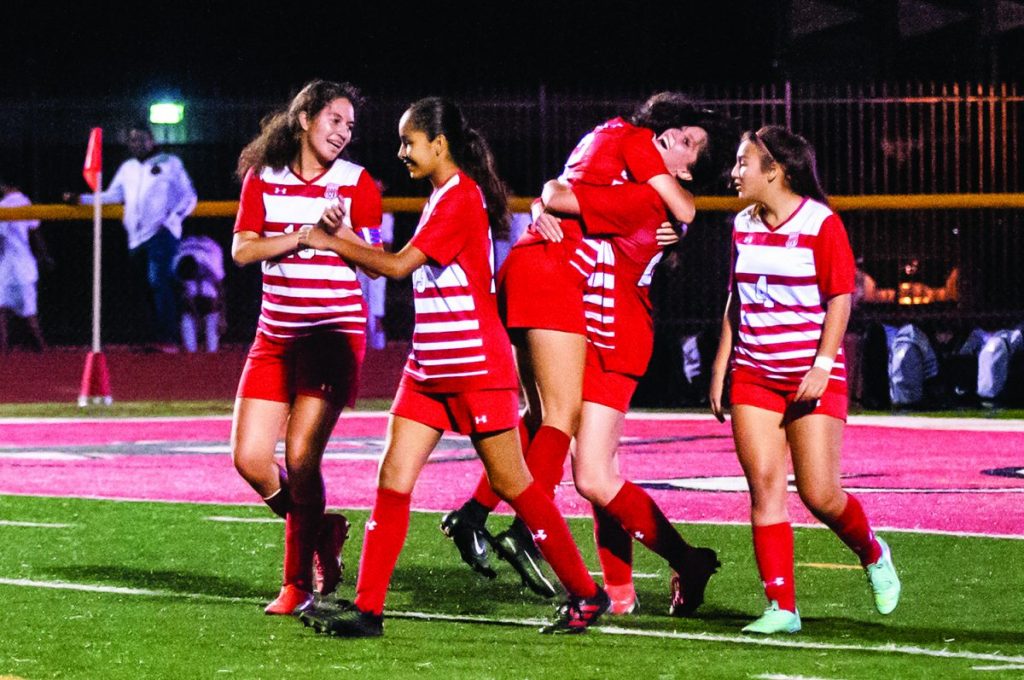 Members of the Sharyland Lady Rattlers soccer team celebrate as they increase their lead over the Pioneer Lady Diamondbacks to 4-0 during their first round District 31-5A game last month. Progress Times photo by Luciano Guerra.

Junior Xochitl Nguma has done pretty well herself over the course of the season, finishing the regular season as the Valley’s all-time leading single season goal scorer with 68. That, along with a defense that gave up only 4 goals during district play proved to be a winning combination.

Two other teams from the Big 7 overcame rough starts in district play to secure spots in the post season.

The Lady Patriots of Mission Veterans won their district opener and then endured a stretch of five games without either a regulation or penalty kick shootout win. They were, however, staying in touch with the competition by earning points from the fact that they were getting through games without losing in regulation time.

At that point Coach Kenan Nunez switched into what he called “playoff mode” by challenging his team to turn things around and moving some of his players into different positions to generate more offense. What followed was a four game winning streak against the teams that Veterans was in a battle with in the District 31-5A standings for the fourth and final playoff spot, along with another game in which the Lady Patriots earned a point. The 13 points earned over that five game stretch put the team in a position to earn their place in the post season, which they did in the  next to last game of the season with, you guessed it, another tie that earned them another point in the standings

The race for the fourth spot in the boys division of District 31-5A was an even closer affair. Coach Juan Hernandez’s La Joya Palmview squad was 2-6 with six games left in the season when he brought up some of his junior varsity players to fill in some of the spots on the field that needed help due to injuries.

Hernandez said the team never stopped believing that making the postseason was reachable and that the young players he brought up refreshed the team.  The team earned four wins in their next five games but needed at least a tie in the final game of the season to finish fourth. Trailing 3-2, the Lobos got a late game goal from Delvin Gomez to tie it, earning that much needed point.

As previously mentioned, the Lady Diamondbacks of Sharyland Pioneer finished second in District 31-5A, led by Bella Austins’ 11 goals during district play. This will be the team’s sixth playoff appearance in the schools six year history.

The Lady Huskies of Juarez-Lincoln are back to see if they can make another long run in the postseason after advancing to the fourth round in 2019. A 2-1 win over McAllen High in February shows that they have the ability to do so. Stephanie Juarez currently leads the team with 15 district goals. With one game to play, the Lady Huskies will finish either third or fourth in District 30-6A.

As of press time, there is still one more playoff spot up for grabs in the boys division of District 30-6A.  The La Joya Coyotes currently hold down the fourth place spot with Mission High three points behind. The two, however, are scheduled to play each other in the final regular season game of the year and a Mission victory by two or more goals would flip the two teams in the standings, sending the Eagles to the postseason.

The answer, as of press time, is that no one knows and the speed in which changes and decisions are coming in light of the COVID-19 outbreak may have even made some of the information in this article different as you read it. According to the latest information from the UIL, the soccer playoffs, scheduled to open next week, have been postponed until April 14.

What we do know is what Coach Nunez spoke to his team about as the season concluded last week.  “I told them that what they accomplished can’t be taken away.”

That goes for everyone who put their efforts into this season. Well done and thank you.