“He liked Tejano music, spending time at the ranch, having a good time with his friends, he enjoyed life,” Saul said. “When he was overseas, he’d ask about grandpa, our parents, his horse, Nellie, everyone. He always gave thanks to God for us.” 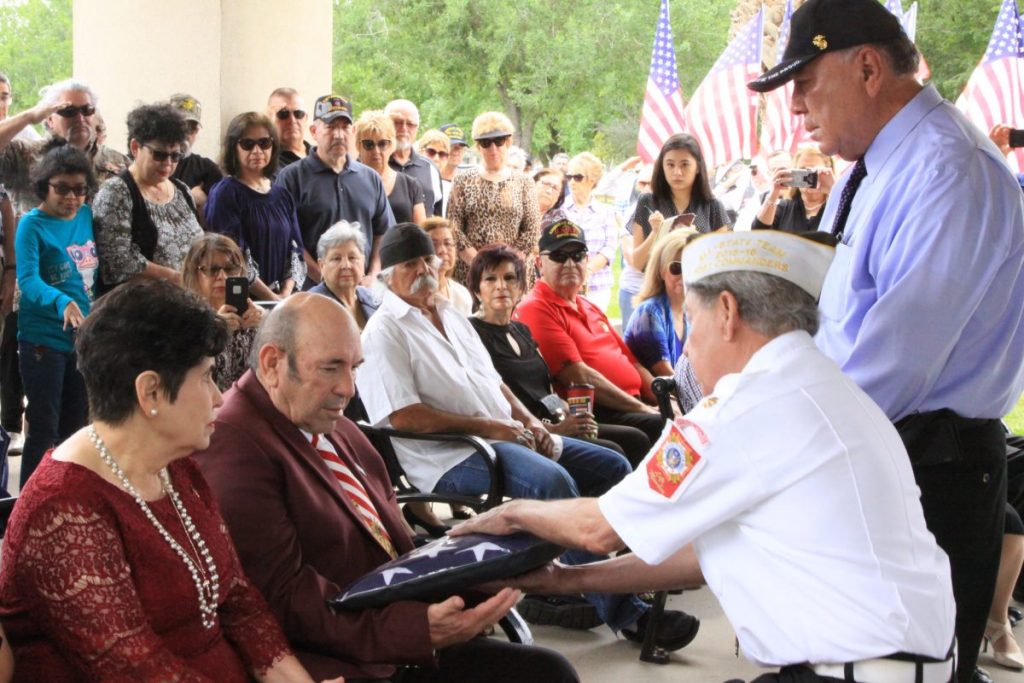 Saul Corona receives a flag during the burial of his twin brother, Army PFC. Joel Corona, who was declared MIA while serving in Vietnam 50 years ago Thursday, March 12, 2020. Progress Times photo by Jose De Leon III.

Joel Corona was an army vet who served in Vietnam. He began his tour on June 29, 1970-days after his 21st birthday-and died on Nov. 8, 1970 six weeks before his tour was set to be completed. The remains of the Pharr native were never found and until last week, he had not had a memorial service.

Thanks to the help of several local officials and veterans, Saul was able to get a memorial service for his twin brother at the Rio Grande Valley State Veteran’s Cemetery in Mission, a process five years in the making, Saul said.

Joel’s burial was attended by hundreds of visitors including family members, veterans of different branches and members of the public who wanted to pay their respects to Joel for serving in a divisive war. At the memorial service, Saul was given a folded American flag that was draped over Joel’s empty casket, a Patriot Guard medallion and a cross that a priest from St. Jude Catholic Church poured holy water on.

For Saul, the moment of closure was a long time coming.

“It finally got done. We’re all happy and we have closure; that’s the most important thing,” Saul said.

Maria Elena Corona, Saul’s wife, said she still remembers how devastated the Corona family was when they heard the news of Joel’s death.

“His mother was the one who suffered through the most,” Maria Elena said. “She was home alone when she found out about Joel and Saul was stocking produce at HEB. A neighbor had to go tell him to get home because his mother had been informed his brother was missing. His mother and father passed away years ago. Like them, we waited for him to come back but it never happened. He never got here. It’s 50 years later and nothing has been done until this service.”

After the burial, the Corona family and attendees went to the Mission Event Center where a wreath was laid in front of the Vietnam Traveling Memorial Wall-the scaled replica of the Vietnam Veterans Memorial in Washington lists all 58,220 names of veterans who died in Vietnam.

Joel’s name was on the 45th line of the sixth panel.

Saul said that for Joel, serving for his country was his duty after his father and other relatives served in WWII.

“They all felt they needed to give back to the country, I was waiting for my brother to complete his tours so I could take his place and serve in the Marines. It did not come to pass,” Saul said. “God’s will was for me to stay home and take care of mom and dad in any way I could.”

For Maria Elena, having a burial for Joel was a dream come true, she said.

“But the real dream would’ve been if he had actually come back alive,” Maria Elena said.