Empty streets, panic and misinformation dominated what was supposed to be a spiritual vacation for a Valley family.

Earlier this month, Mission native and UTRGV Marketing Director Alex Garrido returned from Spain after a week there with his family. The trip, he said, was an ordeal unlike anything he thought possible due to the coronavirus heavily impacting the country. 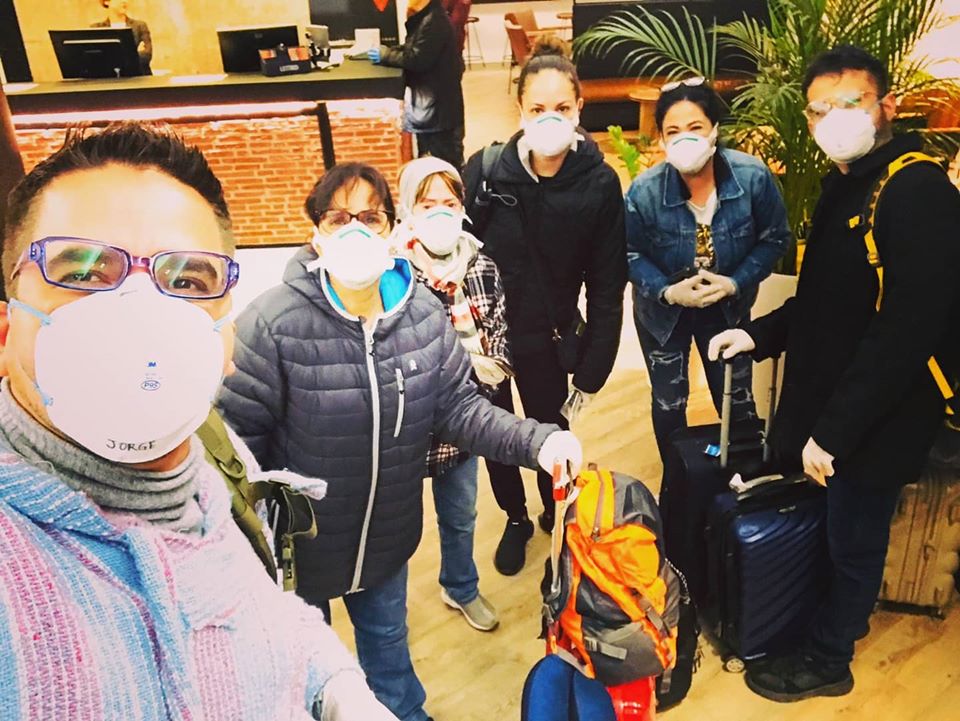 Alex Garrido (right) and his family arriving in Dallas after spending more than a week in coronavirus-stricken Spain Tuesday, March 17, 2020. Courtesy photo.

“It felt like we were there for months, when it was less than two weeks,” Garrido recalled. “We were trying to leave but all the flights kept canceling and we couldn’t find a ticket. We had nowhere else to go.”

According to a Wednesday article from the BBC, the death toll in Spain has overtaken that of China’s with 3,434 deaths, more than half of the deaths reported in Italy.

Globally there are nearly 440,000 cases of the virus, with deaths approaching 20,000 and more than 100,000 people having recovered, according to data compiled by Johns Hopkins University.

Garrido left to Spain with his mother and grandmother and his partner and his partner’s mother to participate in “El Camino de Santiago,” a pilgrimage in northwestern Spain that leads people to the shrine of the apostle Saint James the Great in the cathedral of Santiago de Compostela in Galicia. Depending on the route that followers complete, the trek varies from 220 miles to 507 miles.

Garrido and his family had been planning the trip for nearly two years, he said.

“You complete this while praying to find communion with God along the way,” Garrido explained. “We wanted to get closer to God and strengthen our faith. My grandma wanted to join us and even though she is 78, she still had a lot of strength and her birthday would be happening during the trip so we decided to bring her while we still could.”

Garrido and his family started the trip by arriving in Paris, France on Sunday, March 8 to relax before flying to Spain two days later.

At the time, Garrido recalled a lot of confusion surrounding the coronavirus.

“We had seen in the news when this new disease was announced in December and that it was centralized in China,” Garrido said. “But everyone was only paying attention to China, and there didn’t feel like there were a lot of people concerned about it spreading to other countries since everyone was saying ‘It’s mainly in China with some rare cases of it in Italy.’ Even the president was saying on TV ‘it’s just a normal flu, nothing serious.’ It was a bunch of rumors that we’d later find out were so much bigger than that”

Shortly after Garrido and his family arrived in Spain, U.S. President Donald Trump announced he was suspending travel from Europe to the U.S., which created panic in Spain.

“We were staying in small towns along the Camino but they were not prepared,” Garrido said. “The country of Spain was allowing hotels to be open as long as people stayed in individual rooms and for pharmacies and grocery stores to remain open as well. Out of fear, many of those places in small towns closed. We had a lot of hotels cancelling our reservations and kicking us out of hotels. We didn’t have anywhere to stay.”

With hotels and flights cancelling on them, Garrido and his family had no choice but to continue on their caminata to search for a hotel to accommodate them as they searched for plane tickets to leave the country.

Prior to the trip, Garrido said he remembered seeing the news reports of the coronavirus striking Madrid, Spain’s central capitol. Since the route Garrido and his family was taking was nowhere near Madrid, they decided to continue with the trip as planned, but purchased masks, gloves and hand sanitizer bottles for the trip.

Garrido said he believes that precautions may have saved them.

“We wore masks and gloves and washed our hands everywhere we went and checked in on each other to make sure we weren’t rubbing our faces with unclean hands,” Garrido explained. “We just made sure we weren’t coming into contact with anything that could infect us.”

With empty streets and several closures, Garrido and his family were only able to finish half of the trip.

“We couldn’t find food because grocery stores decided to close because everyone panicked and closed everything,” Garrido said. “We were in small towns on the path so owners assumed that they’d die if they opened their businesses. We had people actually discourage us from staying in their towns. It felt like a posada when Mary and Joseph were going house to house looking for a place to stay like we were refugees going from town to town looking for a place to allow us to stay.”

Ultimately, Garrido and his family found shelter in a hotel that was about to close.

“The owner told us ‘my faith demands that I help you in any way I can,’” Garrido said. “She had to leave to go with her family but left instructions to keep the lights off, lock all the doors and to not let the police see us for fear of retaliation against the business.”

Garrido made daily social media posts to update friends and family on his and his family’s status in Spain as they tried to find a flight home.

“People were always commenting ‘You should’ve come home after Trump started talking about travel bans,’ but it’s not like we didn’t try,” Garrido said. “Airlines were canceling flights left and right. At the airports as soon as we bought tickets the people immediately gave us a refund and took the tickets back because they kept getting cancelled. It was hard to find a flight home. It’s not like we wanted to be trapped.”

“I wanted people to see this isn’t fake news, this is a virus that is paralyzing countries around the world,” Garrido said. “There weren’t enough respirators or machines to treat everyone in Spain, we passed by clinics asking people not to come in because they were over capacity.”

On March 17, Garrido and his family were finally able to find a flight home but at the airport in Madrid, where more than half of all positive coronavirus cases were coming from.

Garrido said that when he originally bought tickets prior to the ban they were priced at $600 per person. Tickets were nearly $4,000 to leave Spain.

Garrido and his family landed in Dallas on that same day where they were immediately screened by the CDC and instructed to report to UTRGV’s medical school for a full screening.

Despite being in an area of high risk, Garrido and his family were not tested due to not showing any symptoms of coronavirus.

“We’re checking in on each other every day to talk and we have a journal to record our temperatures to make sure we don’t have a fever but so far we’re not showing any symptoms,” Garrido said. “I may be isolated at home but it’s thrilling to be here after not having a consistent place to stay or sleep in.”

Garrido is working from home, which he says occupies most of his day and distracts him from feeling bored at home. Despite the struggles of the trip, he said it was worth it.

“We did the trip to have a religious experience and we did,” Garrido said. “It changed our souls and tested our faith. We prayed more than we normally have and in a way, strengthened our faith. It gave us a sense that if we can overcome this through God, we can overcome everything.”

Garrido acknowledged that besides faith, people should remain calm and listen to CDC guidelines to fully get through this pandemic.

“It felt surreal seeing what was happening in a first world country like Spain because being back at home, it feels like I’m watching the same movie again,” Garrido said. “Here at home, there were a lot of people partying at the island instead of practicing social distancing, people believing that the virus wasn’t a real threat and accusing the government of overreacting, it’s a scary experience that I don’t think anyone can be fully prepared for, but we can try to by following recommended guidelines.”

Hidalgo County recently opened up a hotline for residents to call at 956-292-7765 for any concerns. The county also has a website to keep residents informed on local coronavirus developments.

Garrido also recommends residents go to uthealthrgv.org which has information in English and Spanish on the coronavirus.

People shouldn’t be scared, but they should take this threat seriously,” Garrido said. “Being scared and panicking is a useless attitude and we saw a lot of that in Spain. We have to be proactive, not reactive, and understand that this is something that will change your life temporarily because of this. I miss doing something as simple as going out and eating at my favorite restaurants but that’s something we all can’t afford to do right now.”

“Even in Spain when they shut down everything, they still had grocery stores open,” Garrido said. “They’re not going to close them, shop like you normally do instead of stocking up for months.”

Garrido said his experiences with the coronavirus has changed him already.

“Now every time I see or hear someone sneezing, I freeze and get paranoid about what that person is spreading,” Garrido said with a laugh. “This is turning me into a germaphobe.”