These days, Martha Sanchez spends most of her day contacting people in Starr County either through WhatsApp or Facebook Messenger.

“We’ve also been doing phone banking and reached out to all the members of our 50 committees to call members to ask how they’re doing with this situation and the stay at home order,” Sanchez explained. 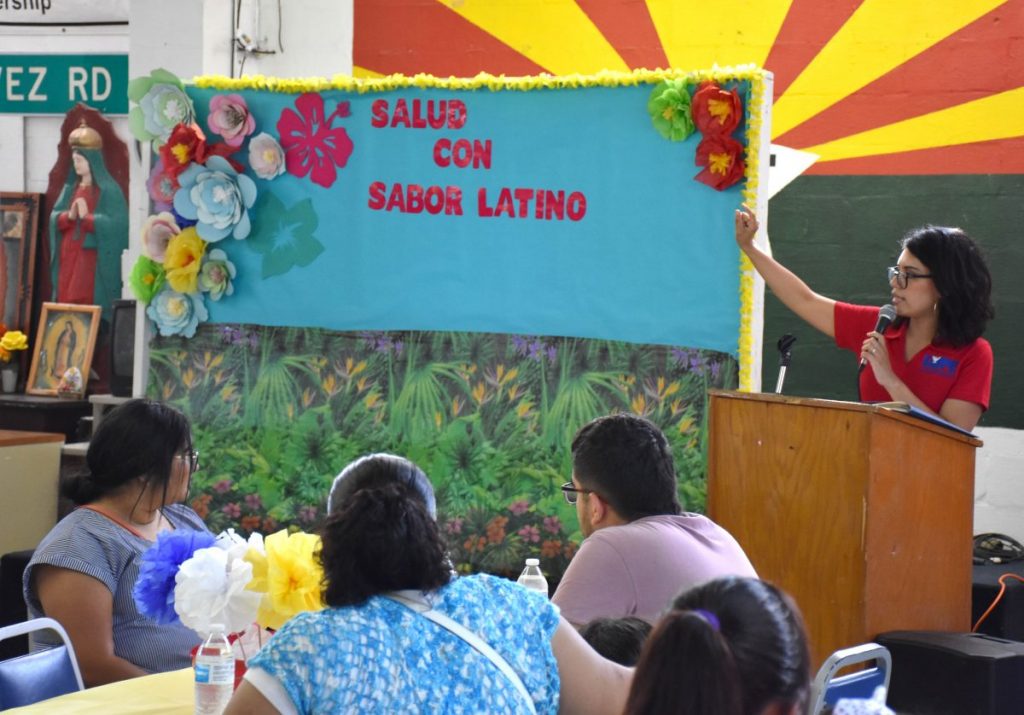 File photo of a May 2019 health class organized by LUPE. Courtesy photo

Sanchez serves as the community coordinator for the non-profit La Union del Pueblo Entero, which offers immigration, income services and citizenship classes for its 28,000 members in Cameron, Hidalgo and Starr County.

Sanchez is in charge of contacting Starr County.

“Most of the people there are taking the stay at home order seriously and only going out to groceries,” Sanchez said. “We haven’t encountered anyone who is sick or needs help that we can’t help. We are grateful for that.”

Last month, Hidalgo and Starr County signed Disaster Declarations in response to the coronavirus epidemic that has infected more than 935,000 people worldwide and 106 throughout the Rio Grande Valley.

Countries such as Hidalgo and Starr have shelter in place orders where residents must stay at home unless they are going to work, grabbing groceries or any household item.

“The main issue we are seeing is fear,” Sanchez said of the calls. “Some people in Hidalgo County and Starr County have told us they have a fear of going out and being stopped by law enforcement since they don’t have a driver’s license. They need to go to work because a lot of people unfortunately do not have the safety net of having money saved up since they live paycheck to paycheck. So we encourage people to not go, you run the risk of being fined.”

Sanchez said LUPE is preparing a database of phone numbers to contact for people in need of help. Members are receiving services for their families with other programs such as each school district in the Valley offering take home school lunches for students.

“So there’s not an insecurity of not having food for kids due to what the school is doing and we’re grateful for that,” Sanchez said. “We try to find people who we can help. We’ve had a case where somewhere without a car needed help picking up meals for her kids so we connected her to someone who could help, we’re trying to still be there for members with the help they need and offer follow up phone calls to continue to offer help and tell them how to reach out for help.”

While checking in on members, LUPE is continuing to promote participation in the 2020 Census. Prior to the Disaster declaration, LUPE had been encouraging residents to participate in the census by going door-to-door in block walking events in undercounted areas to inform residents on the importance of the census.

“Now the best we can do is tell the people we call to check in to complete the census,” Sanchez said. “It’s something people can do in their homes online or by calling the census bureau to complete it over the phone. With this coronavirus we know we will need a lot of money to rebuild our community and one way we can be proactive is by making sure the community is counted to receive money.”

“The participation numbers are low, I made 30 calls today and only one said they’d completed the census,” Sanchez said. “It requires a lot of push but a lot of people we’ve called have said they haven’t received any piece of mail in Starr County about the census.”

According to Sanchez, Starr County was estimated to have been undercounted by as much as 40 percent during the 2010 census.

“That is scary, it means a lot of people aren’t pushing the census there, we need to figure out how to get more information out there,” Sanchez said. “We need to talk to county officials to see how they’re pushing the census, people need to hear about it from entities besides LUPE.”

With the daily phone calls, Sanchez said LUPE is providing members something that will help the community get through the current pandemic: connection.

“There’s a team of organizers who are there to listen to people and people need to be listened to even if we can’t solve the problem,” Sanchez said. “Sometimes the problem they encounter may be too big for us to handle but the least we can do is listen to people to let them know we will discuss the issues. It’s important for people to hear from us at this time so they know we are standing by them.”