When Maria Guadalupe De Leon saw a shortage of masks available to the public, she knew she had to do something.

De Leon, along with several others in the Valley, has been spending her quarantine time sewing masks for anyone who needs them. She, along with her daughter Ana Maria De Leon, have been sewing the last two and a half weeks. 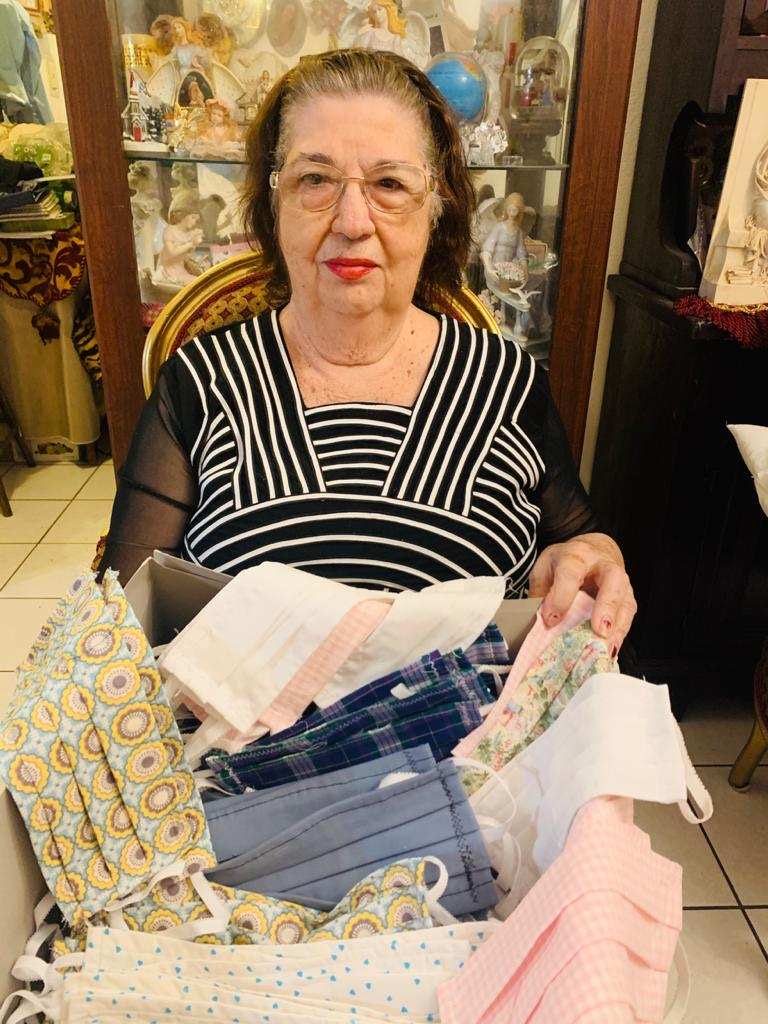 Maria Guadalupe De Leon shows off some of the finished product – specially-sewn masks to help slow the spread of the coronavirus. Courtesy photo.

“It’s been busy, because my mom tries to give as much as possible,” Ana Maria said. “It’s for whoever needs them, especially those who are working outside of their house.”

Maria Guadalupe first started when her friends, older people who still needed to go outside for essentials like groceries and work, were in need of some sort of protection. The county has recommended that medical-grade masks be reserved for health care workers and first responders in this time of limited supply, so people have had to get creative.

“She’s always been someone to help out not only her friends, so she started to make masks,” Ana Maria said. “People asked her if she had any masks, so she said ‘you know what, let me make some,’ especially for the older people. One came into another, and by the time you know it we had all these people who started asking for masks, so I said ‘let me help you.’”

Ana Maria noted that while they’ve been working together, her mother has been doing the majority of the mask-making.

“I bond with her, doing this,” Ana Maria said. “I’m not somebody who likes to sew like she does, so this brings me closer to what she does, and she teaches me more than what I used to know.”

She stressed that while they were making these masks to help those in need, they also wanted to prevent people from going outside and getting the virus.

“A lot of times people are saying it’s not the ‘right’ mask, but the main thing is to protect yourself,” De Leon said. “If you’re going to go out to the doctor or anywhere you’re going to have to be close to other people, this is to prevent what’s going on right now.”

So far, De Leon has sewn over 500 masks. If Ana Maria stops by a drive-thru for food, she’ll often ask if the workers need any masks.

Based out of McAllen, Ana Maria has been allowing people to either pick up masks or will deliver them herself, dropping them off in mailboxes so people don’t have to make physical contact with others.

“There are a lot of us who can help the community,” Ana Maria said. “She’s always given to people – if she can give back to those in need, she’ll give it out. My mom has always taught us that it’s better to give and not receive – it’s important to us.”

The need for masks is so prevalent that De Leon is not the only one keeping busy. Clarissa Treviño, who is based out of Edinburg, has sewn over 200 masks in the last week and a half to keep up with the demand.

“Every day somebody’s calling me and saying they want more,” Treviño said. “I have been non-stop for four days, I’m at the sewing machine right now.”

Treviño had originally intended to make masks exclusively for family, but once her brother posted his on Facebook, she started getting more and more orders. It takes her about 15 minutes to make a mask, so she’s started her own personal assembly line to make the process run more smoothly.

“My neighbor told her friend, and then they wanted more,” Treviño said. “It’s just been word of mouth, and that alone has just bombarded me, I didn’t expect it.”

Treviño heard others had been selling their masks for $10, but she thought that was too much. When people asked her how much she would sell them for, she said she would accept $5 for two masks.

“Even if they’re not the medical grade, and they’re not close to 100 percent protection, something is better than nothing,” Treviño said. “I think it’s important to wear them at least, for your own safety, if not for others.”

Treviño hopes that people take up more tactile hobbies like sewing, because she didn’t realize how few people knew how.

“I was shocked,” Treviño said. “These are life skills that we need to have that computers cannot do, especially when you need something right away and there’s a shortage.”