For the first time in over a month, Palmview High School seniors returned to campus for possibly the only rite of passage they’ll be able to complete on campus.

Last week, seniors arrived at Palmview High to pick up their graduation cap and gown through curbside delivery performed by representatives from the company Jostens and Palmview HS Principal Yvonne Ayala at the campus gym. 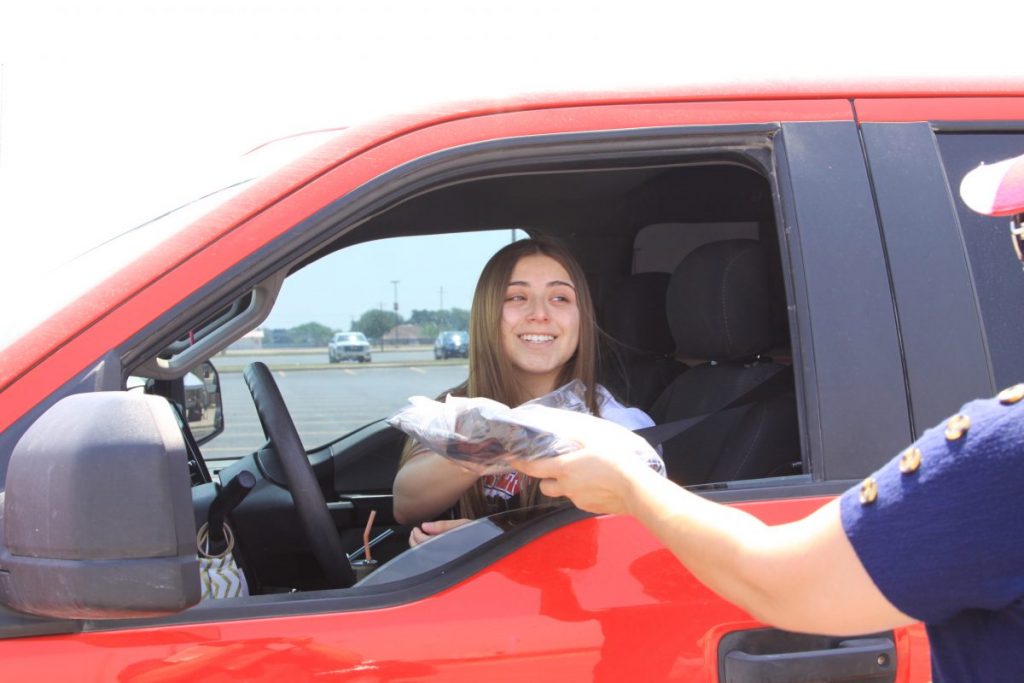 “It’s safe like this,” Damien Moreno said of the curbside pickup. “It’s my first time back on campus since before spring break and it feels weird to not be able to go to the campus. My older brother graduated last year so I thought I’d experience the same things he would but instead I may not be able to walk across the stage and receive my diploma because of the pandemic we’re in. It’s surreal.”

For all the students, it was the first time they’ve been on campus since mid-March before they left for spring break. Spring break was extended indefinitely due to the COVID-19 pandemic, causing Gov. Greg Abbott to announce schools must remain closed due to the remainder of the school year to prevent mass gatherings from spreading the disease.

Graduation for the approximately 540 students in the Palmview High School’s class of 2020 was originally set for later this month but has been delayed later this summer with alternate dates set for June, July and August, Ayala said.

“It’ll ultimately depend on what the governor, the county and the Texas Commissioner of Education decide,” Ayala said of the graduation ceremonies. “I never thought that Friday before spring break we wouldn’t come back. I thought we’d be delayed a week or two but did not imagine we wouldn’t come back at all.”

Despite picking up the cap and gown for his son, Damien, Sergio Moreno Jr. lamented the experiences his son will miss out on for graduation.

“Everyone wants to be proud of their kid and take pictures of them after they receive their diploma but the whole family is probably not getting together for this anytime soon,” Moreno Jr. said. “We’re going to make up for this by having a huge party for Damien when it’s safe and spoil him.”

Senior Reymundo Flores was among the students who appeared to pick up his cap and gown. He called being back on campus a “surreal” experience.

“I’m used to coming here and studying and going to class, but now it just looks so empty,” Flores said. “I’d love to come back and finish my last year here with my friends and go back to class and JROTC. Picking up my cap and gown just reminds me that I miss school.”

Flores was joined by his mother, Carmen, in picking up the cap and gown. She said it’d be impossible to celebrate Flores’ graduation since she and her husband have been out of a job for a month.

“It feels sad to be here, having to get my cap and gown through the car window. It’s not how I thought my senior year would be,” Lloren said.

For Lloren’s mother, Theresa, picking up the cap and gown is a small victory during the pandemic.

“She’s the only child I have and we were planning something special when she graduated but with all of this I don’t know what we’ll do,” Theresa said. “Her graduation is something I’ve always wanted for her but I wanted it with the big ceremony so she can receive her diploma in front of a crowd like it normally happens. It’s nice to see that the school still cares about its students enough to let them have their cap and gown, but it’s still sad it’s being given in these circumstances.”

According to Jostens Representative Jim Ramirez, this time of year is usually the company’s busiest time of year due to all the orders of cap and gowns.

“It’s supposed to be our Christmas,” Ramirez said.

Due to the pandemic, Jostens has been letting students pick up their cap and gowns at their offices in McAllen and Brownsville but their curbside delivery was the first in the La Joya school district.

“We already have other schools set up for curbside delivery in the Valley View, Donna and Weslaco school districts,” Ramirez said.

“Graduation is a rite of passage. Whether graduation ceremonies happen or not, in our culture, we want to see our child with a cap and gown,” Ramirez said.

Students showing up to pick up their cap and gown had to have paid for it in full and also received yard signs and a copy of the Dr. Seuss book “Oh the Places You’ll Go” as a gift.

“We want the kids to know their journey in life is just starting,” Ayala said. “Their high school career may be coming to a close but the next step in life is about to begin and their destination and all the possibilities are endless. We want kids to know we still honor them and are proud of them. I know families want to take photos of their children in cap and gowns, and this way they can still do that.”