While the majority of news about the local prep sports scene has revolved around the suspension of spring contests by the UIL due to the COVID-19 pandemic, what many may not be aware of is that it didn’t just affect the world of soccer, baseball and softball. The sports of powerlifting, track and field, golf and tennis were also affected by the suspension. Even those sports that completed their seasons have been affected.

The closing of schools meant that all sports have shut down for the time being, regardless of when they actually compete. One example of that is football. This is a time of year when many teams have spring football, a period of practicing outside of the school day that, in many cases, resembles what the teams will do as if they were preparing for a game in the fall. 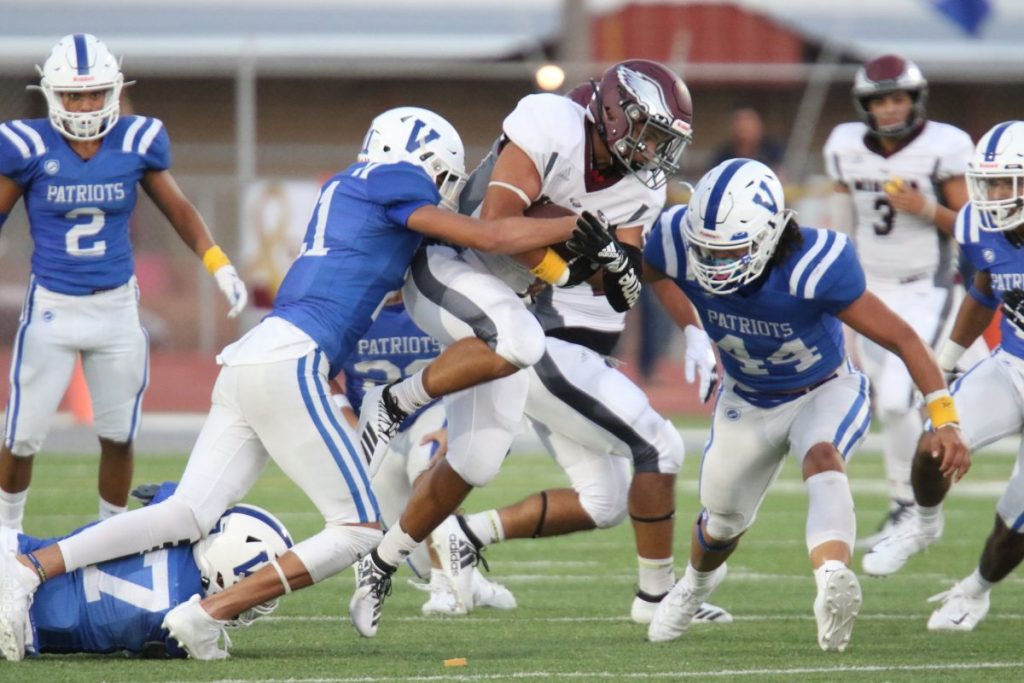 The choice of whether or not to have spring football is up to the individual head coach. If they do, it means 18 practices in the spring but one less week of practice in the fall and one less scrimmage to prepare for their opening game. The decision to have spring ball or not could be based on a number of factors. A coach might be inclined to have it if, for example, he had a lot of holes to fill due to graduation and he wanted the extra workouts to evaluate the athletes who might be filling those spots. If a particular program has a large number of athletes involved in other spring sports such as baseball or track they might be inclined to just wait until the fall. Some coaches, who were not planning on having spring ball this year, told me that they wanted instead to focus on getting their players ready for summer 7-on-7 games in hopes of having success there. The pandemic changed all that.

In my conversations with the head football coaches of the Big 7 this week I discovered that only one of the seven schools was planning on having spring ball this year. Mission Veterans head coach David Gilpin has held spring football every year since taking over the Patriots program. “We missed a lot of football time,” said Gilpin when asked about recent events.

Remember, however, that with or without spring ball, teams this time of year normally still get the chance to work on football during their athletic period and students are usually afforded the opportunity to visit the weight room before or after school. “We can’t go to our facilities,” said La Joya Palmview coach Margarito Requenez. “That’s the hard part.”

Most of the coaches I spoke to mentioned that their off season programs go into football mode after Spring Break, putting more emphasis on the specifics of a team’s offense and defense.

When the school year ends the preparation doesn’t stop either. In recent years, the UIL has allowed teams and coaches the opportunity to interact more over the summer with organized strength and conditioning programs along with time to work on a specific sport.

Recent events have, of course, rendered most of this moot for now. No one is having spring ball, getting work done in their athletic periods or being afforded the chance to visit the schools’ weight rooms. The state 7-on-7 tournament, a big summer event, has been cancelled as well.

“7-on-7 is a big help,” said Requenez. “You rely on 7-on-7 to stay active and to keep to that football mind thinking.”
So just what are the football coaches of the Big 7 doing to keep their players ready for the upcoming season?
Everyone it seems is sending out workouts for their kids to follow at home and conducting virtual meetings to go over X’s and O’s. The coaches I spoke with are pleased with the responses they are getting. “There is a lot of learning going on right now,” said Gilpin. There are, however, limitations.

Sharyland coach Ron Adame said,” It’s not as personable as actually seeing that individual in person. That’s probably the biggest thing that I miss, not being able to talk to our kids in person, to monitor their body language.” Coach Tom Lee from Sharyland Pioneer spoke about missing the opportunity to have his team together. “Being able to have all of our kids in the weight room together during the summer is how you build some camaraderie and some togetherness.” La Joya Juarez-Lincoln head coach Tomas Garcia echoed those sentiments when asked about what was something missing from the current situation. “The camaraderie of the kids getting to know each other,” he said.

The coaches are also waiting to see what comes next.

Last week the UIL hinted at the possibility of allowing more time over the summer for coaches and athletes to work together, something that the coaches I spoke with said would be important to make up for lost time. No official directives have been issued as of this time.

A big part of that lost time that concerns the coaches is that of their athletes conditioning level when they are given the opportunity to begin practicing again as a team. Despite being given workouts that can be done with or without access to weights, the coaches I spoke with expected that more attention would have to be given to getting their athletes in shape than in previous years.

As for when the time comes to start coaching football again Mission coach Koy Detmer said, “I think that what it will probably do with everybody is force everybody to kind of start off maybe a little more basic with some of the things they are teaching.”

There are still a lot of unknowns and perhaps La Joya High coach Rueben Farias said it best when describing what to think about when things start moving forward. “My main concern is the health of the kids. If we come back too quick we might create more problems. My main thing is the safety of these young men.”