A pandemic and the possibility of a thunderstorm didn’t stop a Sharyland Pioneer High School athlete from signing a letter of intent to play golf at the University of Central Oklahoma.

Sharyland Pioneer senior golfer Louis “LJ” Chavez Jr. signed the letter of intent Wednesday at a ceremony held in the backyard of his Palmhurst home with his friends and family in attendance. 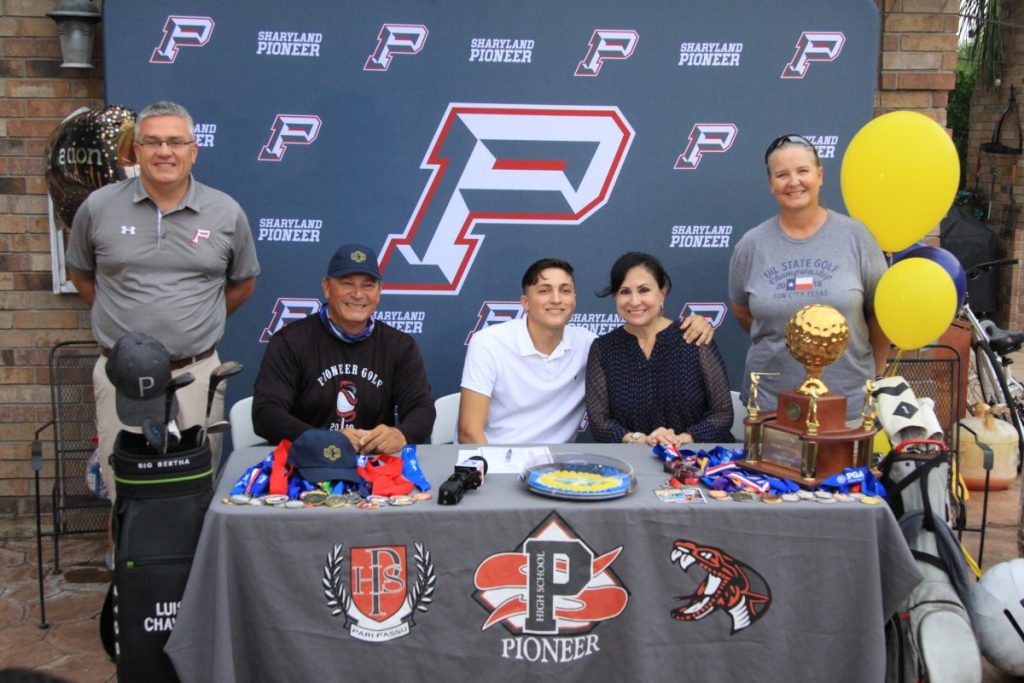 Louis “LJ” Chavez Jr., at his athletic signing in his backyard to play golf at the University of Central Oklahoma Wednesday, May 6, 2020. Progress Times photo by Jose De Leon III.

“I’m so grateful to see all my friends and everyone I invited, it means a lot to me,” Chavez Jr. said. “These people have been my friends forever and I just couldn’t be more grateful. I’m upset I didn’t get to play at state, my last ride but I’m so happy to see everyone here.”

“As a golfer at Sharyland Pioneer, Chavez Jr. has had many accomplishments such as being named MVP, district champion, being ranked in the regional top five and qualifying for the state tournament as a junior,” Sharyland Pioneer Athletic Coordinator Tom Lee said.

At the University of Central Oklahoma, Chavez Jr. said he plans to major in business and has been preparing to play at the collegiate level for years.

“It’s been six hours a day, every single day for the past five years, constant grinding, knowing what I wanted to achieve and achieving it,” he said.

Whereas athletic signings are usually held at school, Chavez Jr.’s signing was the first the school has done at the home of an athlete due to the COVID-19 pandemic that has closed schools across the state for the rest of the academic year.

The at-home signing was organized by Chavez Jr.’s parents who contacted Coach Lee about finding a way to celebrate LJ’s accomplishments.

“I wanted him to have what he deserved,” Chavez Jr.’s mother, Debbie, said. “Everyone gets their signing and I was afraid he wasn’t going to get one, but he is.”

Lee provided the campus backdrop and Chavez Jr.’s awards. According to Lee more at home signings are being considered for athletes at both of Sharyland’s high schools.

“Never in my 26 years of coaching have I seen this, but it’s the best we can do and we try to make it like we do at school,” Lee said. “I’ve watched LJ grow and know he’s determined to have success in the next level. We need to recognize the kids who have put so much hard work in these last four years.”

“He’s worked too hard to not have this. It’s a blessing, we’re so blessed this day came,” Chavez said. “We all know how difficult the journey is from high school to college and then from playing in college to playing pro. It’s a small chance of him making it but him getting that chance while doing something he loves is wonderful, we expect big things from him. When you love a sport and your kid is this motivated, you have to support this.”