Nearly two months after her appointment to the board, former La Joya ISD superintendent Maria Filomena Leo was selected to serve as the housing authority’s new chairperson.

Leo, widow of former La Joya Mayor William “Billy” Leo, was selected as chairperson in a unanimous vote during a Thursday, May 7 meeting of the housing authority’s board members. Fellow board member Jorge Bazan was also unanimously voted to keep his position as vice chairperson. 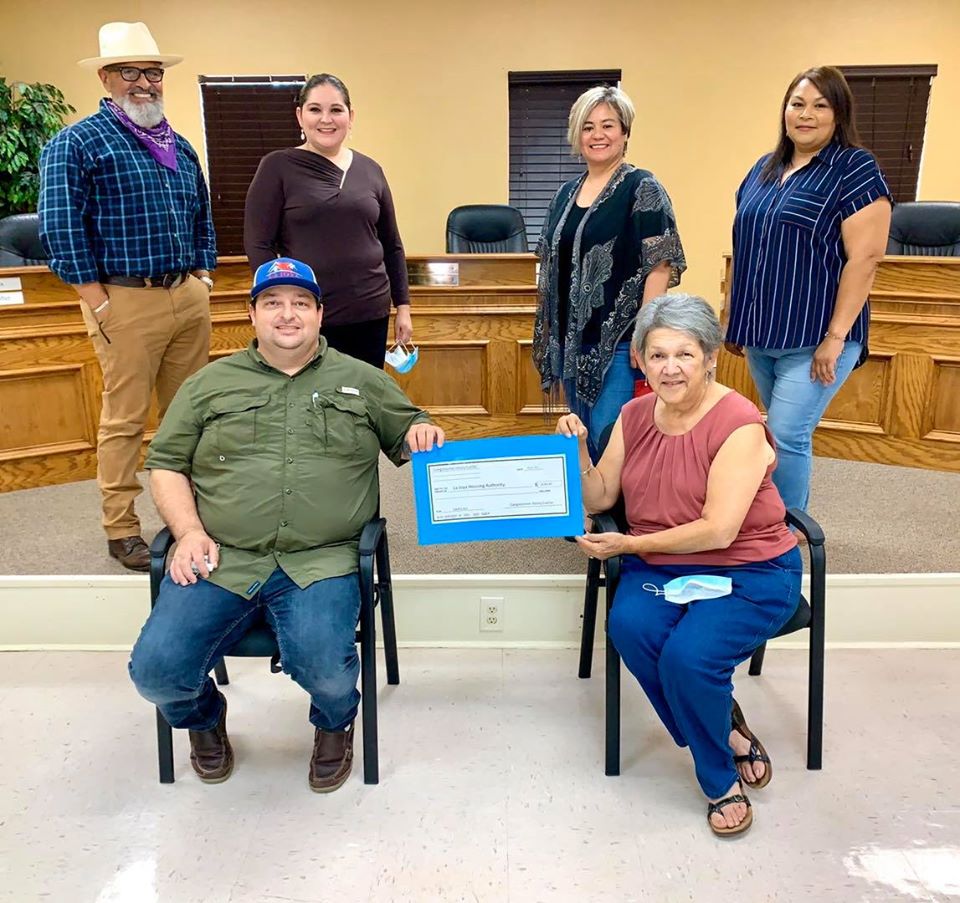 La Joya Housing Authority Board members with a makeshift check of $14,962 they received through the CARES Act Thursday, May 7, 2020. Courtesy photo.

“Having lived in this community for 46 years I am aware of the situation concerning this housing authority and understand there are hurdles to climb, but we will take those one at a time,” Leo said.

The housing authority has been mired in controversy since 2016 when its executive director at the time, Juan Jose “J.J.” Garza was indicted in a bid rigging scheme. His replacement, Frances A. Salinas, was arrested on federal charges of wire fraud and conspiracy to commit wire fraud last year alongside the board vice chairwoman Sylvia Garces Valdez. Current Executive Director Ruben Villarreal was hired last September.

“The greatest challenge will be learning the processes that [the U.S. Department of Housing and Urban Development] confines us because I understand a federal agency like that can be very restrictive,” Leo said. “That will be the greatest challenge, learning to meet the needs of the residents while following federal guidelines.”

Leo, a former interim superintendent for the Weslaco, Mercedes and Sharyland school districts, was appointed to the board last March after former chairman John J. Peña announced his retirement from the board during the February board meeting.

The housing authority board officially restructured after Hillary Garcia was sworn in as the new tenant commissioner last week.

“I am very excited and eager to know what is going on in the community around me and talk to tenants and see what the needs are for them,” Garcia said. “Maybe with the right funding we can get that done.”

At that same meeting, Villarreal addressed to the board on the financial status of the housing authority, which he informed Leo was still paying for several fees dating back up to four years.

“As far as I can tell, our financial difficulties will date back to 2016. Yes, we’re going to fix things, it’s not a problem, but to bring financial infrastructure up to par, that will be an issue,” Villarreal said. “We have fees dating back to 2016 on federal and financial deficiencies from the audit of 2016 and 2017. I don’t want this to haunt us and affect the board in three more years.”

Villarreal also informed the board of $14,962 that the housing authority would receive through the CARES Act. As previously reported, the money was announced by the office of U.S. Rep. Henry Cuellar, D-Laredo, who said the money was to be used to “ensure people with disabilities have access to affordable housing during the COVID-19 pandemic.”

This created confusion for the housing authority as they have not received any guidelines on how to spend the money by HUD, Villarreal said.

“The good news is, the money is there,” Villarreal said, adding that HUD was likely being delayed in their responses due to employees working from home. “They’re going to give us a protocol on how to spend it. CARES money needs to be handled a certain way. I’m waiting for more clearance.”

As previously reported, the Mission Housing authority also received money through the CARES Act that was announced by Cuellar’s office to be used to serve disabled residents.

Acevedo provided to the Progress Times a copy of a HUD response on how to use the CARES Act money, which stated the CARES Act provides funding to “to prevent, prepare for, and respond to coronavirus, including for public housing agencies to maintain normal operations and take other necessary actions during the period the program is impacted by the virus.”

“It created confusion, it was vague and did not provide what the terms were and guidelines on how to spend it, “Acevedo said of Cuellar’s announcement. “The intent of this money for us is to focus on having the ability to work from home so we’re gonna be taking advantage of it, purchase laptops and software to work from home, technology upgrades for the office and have cleaning supplies for the building.”

When reached for comment, Charlotte Laracy, a spokesperson for Cuellar’s office, explained that the wording on the original press release was due to HUD using a “pre-established funding system.”

“This includes the mainstream housing program. Though these funds will support non-elderly tenants with a disability, the funds will also provide support for testing, medical supplies, and other activities that may mitigate the impact of COVID-19,” Laracy said in an emailed statement.

Villarreal said as of Monday afternoon he is still waiting on a response from HUD regarding the CARES Act funding.