Unlike other college signing events, Flores’ signing was held at Balli’s Social Event Center due to VMHS being closed for the rest of the school year due to the ongoing COVID-19 pandemic. 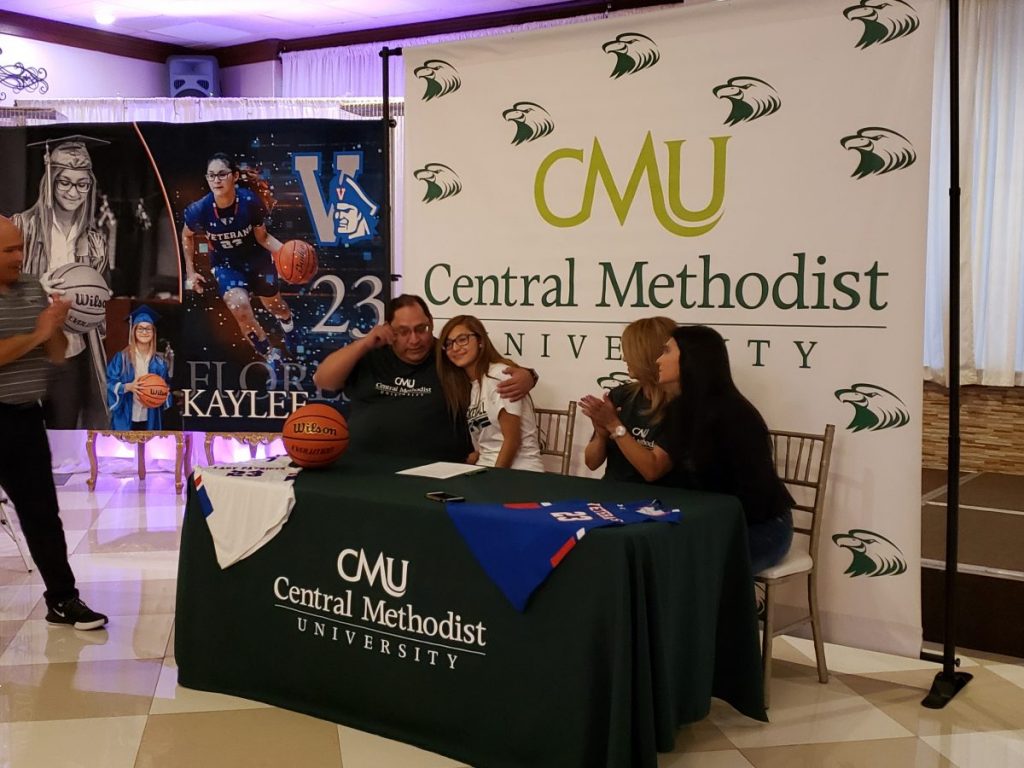 Kaylee Flores (center) is embraced by her father, Johnny Flores, at a ceremony for her collegiate signing Saturday, May 9, 2020. Progress Times photo by Jose De Leon III

“As tough as the stay at home situation has been, we’re happy to see people here,” VMHS Athletic Coordinator David Gilpin said. “She’s a heck of a basketball player, one of the top five students to come from our school and we’re very proud to have bear witness to her and will continue to do so. This is a worthy reason to come out for.”

Flores, who plans to study to be an athletic trainer, is a top athlete in the mission district whose accolades include being named co-offensive player of the year by The Monitor, Player of the Year by the RGV Basketball Association and has been an all-district performer.

“I’m really happy to continue playing with a great team,” Flores said of CMU. “They treat you like family and that’s what I want. I’ve been playing my whole life alongside my fellow teammate and point guard Ronnie Cantu and that has helped the both of us become better players.”

Rafael Cantu, the campus’ former head basketball coach who coached Flores during her four years at VMHS, had nothing but praise for his former student.

“Kaylee is not the talkative kind, but she does her talking on the court,” Cantu said. “She loves competition and welcomes it, she’s a great player and we’re fortunate to have her in our program these last four years.”

At the signing ceremony, Flores’ father-Johnny Flores-spoke about his daughter’s determination to excel in sports while facing bullying in high school.

“I call her the overachiever. She’d had to overcome a lot of obstacles and a lot of bullying because of her age difference where she’s always been the youngest one in her class,” Johnny explained. “But she overcame it and became a better person, and learned life wasn’t going to be fair all the time. She’s very mature for her age, and when she talks, she speaks volumes. I’m very proud of her and of the fact her mom and I were able to see this.”

According to Flores, she faced bullying during her freshman and sophomore years as a varsity player.

“I was the only freshman and they didn’t accept me but I ignored them,” Flores said. “I wasn’t there for drama, I was focusing on the prize-the game.”