All Maria Chapa wanted was for her son to graduate high school.

Chapa is the mother of Veterans Memorial High School senior Fernando Chapa and was devastated when she learned that the Mission school district would be closing all their campuses last March in response to the COVID-19 pandemic. 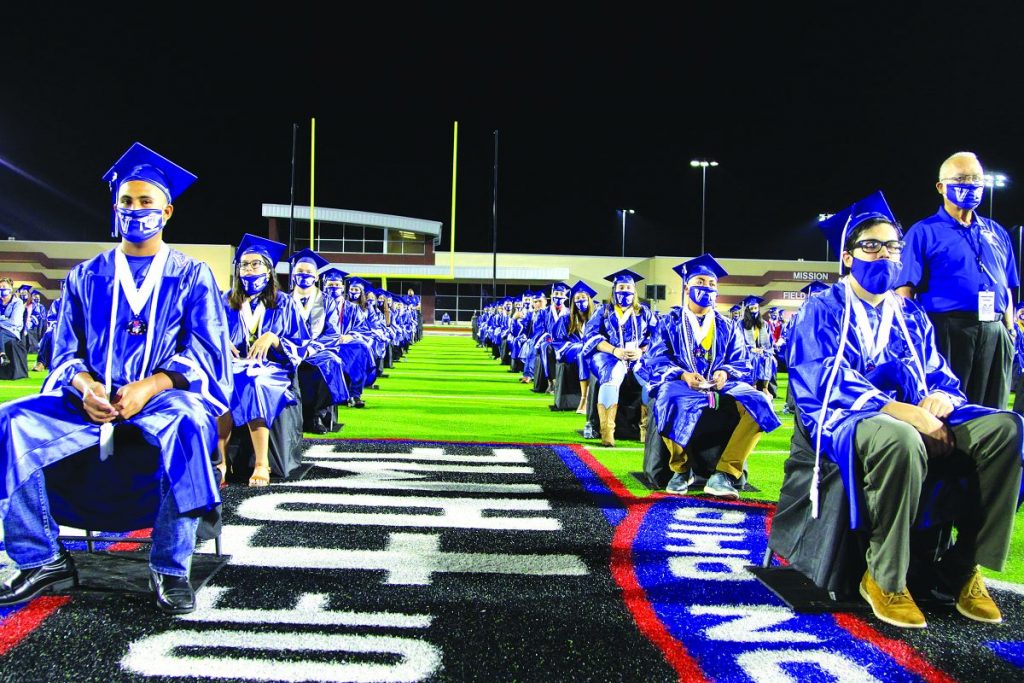 “He’s my only son, I looked forward to this graduation and wanted him to have the experience I had,” Maria, a member of the Mission High School Class of 1983 said. “I was devastated because I thought there wouldn’t be a graduation, it’s what every graduating senior wants.”

Chapa, and all other parents in the Mission school district, got their wish when the school district announced that, following guidelines set forth by the state, the Centers for Disease Control and Prevention and Texas Education Agency, school districts would be allowed to hold graduation ceremonies for their seniors.

Mission CISD held back to back graduation ceremonies starting Thursday, June 28 at the Tom Landry Hall of Fame Stadium. Their last graduation ceremony was Saturday, June 30 which Maria, as well as her mother and father, attended to watch Fernando receive his diploma.

As part of the safety protocols, MCISD limited the amount of people in the stadium, required all attendees wear masks and set up a hand sanitizing dispensation station at all the entrances and exits for people to use.

“These safety measures are for us to be safe and we’re all together because of it,” Chapa said. “I graduated in this stadium 37 years ago and it’s great seeing [Fernando] graduate in the same place as me. I am so proud to see him here.”

As part of the safety measures, all the graduating seniors were seated in the stadium field six feet apart from each other and wearing masks. MCISD spokesman Craig Verley said the district only gave each graduating senior four tickets for family members to attend the ceremonies.

“We never gave out tickets in the past, seating was done on a first come first served basis and it would fill up wherever we held the ceremonies,” Verley said. “This is new for us. Seating in the stadium has been arranged to where every other row is blocked off to only allow 25 percent capacity. But the response has been positive so far, everyone is glad we’re doing something that’s close to normal and the first two ceremonies had cooperative audiences that made the ceremonies run smoothly.”

Whereas previous graduation ceremonies had been held either at the McAllen Convention Center or the Payne Arena, this was the first one in years for the district that was held outdoors, Superintendent Dr. Carol G. Perez said.

“We were striving to have a face to face ceremony, it’s what our children deserve,” Perez said. “We knew there’d be the possibility of a face to face graduation and wanted to validate them.”

The only downside of the event was a pesky drizzle of rain that lasted throughout the evening and finally stopped by the time the graduating seniors walked into the stadium to thunderous applause from their masked parents in the stands.

“The rain was just a little cloud that will pass through quickly, students and parents don’t mind,” Perez said. “So many times we’ve gone out on football games with umbrellas or freezing cold weather and this event is more important than that.”

The graduation ceremonies were one that Dr. Perez said needed to occur to honor the graduating class of 2020 in each of her high schools.

“With COVID-19, their life as a student was interrupted but I think this compensates for a lot of things,” Perez said before the VMHS commencement ceremony. “They’re able to see their classmates even though they’re social distancing but we were able to give closure this school year and have such an exciting celebration, it will be memorable for them.”

Though Valedictorian Damien Gonzalez did not mention the COVID-19 pandemic in his speech, he used it as a chance to remind his fellow classmates that life is ultimately about taking risks.

He recalled big moments in his high school career, such as beating the Mission High School Eagle mascot in a dance battle during the Battle of Conway and flopping during his first Masterminds game show appearance before having a comeback that earned him victory in his next appearances of the show.

“I’m a competitor, and I learned there is nothing more worthwhile than taking risks,” Gonzalez said. “If I want to fall, I don’t want to fall back on anything. Every failure in life is one step closer to success. You’ve got to take risks. You’ll fail at something no matter what, it is inevitable. I was a nervous wreck on Masterminds, but I didn’t quit. It helped me prepare for the next match. I failed and failed but while others have broken under the iron, I understood that every failure we commit is one step closer to success.”