When Joshua Gaytan was a student at Donna Wernecke Elementary School, his twin brother, Joseph, was placed in the school’s Gifted and Talented Program.

“It led to a lot of people assuming that he was the smarter one,” Joshua recalled. “I don’t really beat him in a lot of thing so it’s not a good feeling knowing that you have potential but are being demeaned for not reaching it so I thought to myself ‘Why can’t I be up there like him?’” 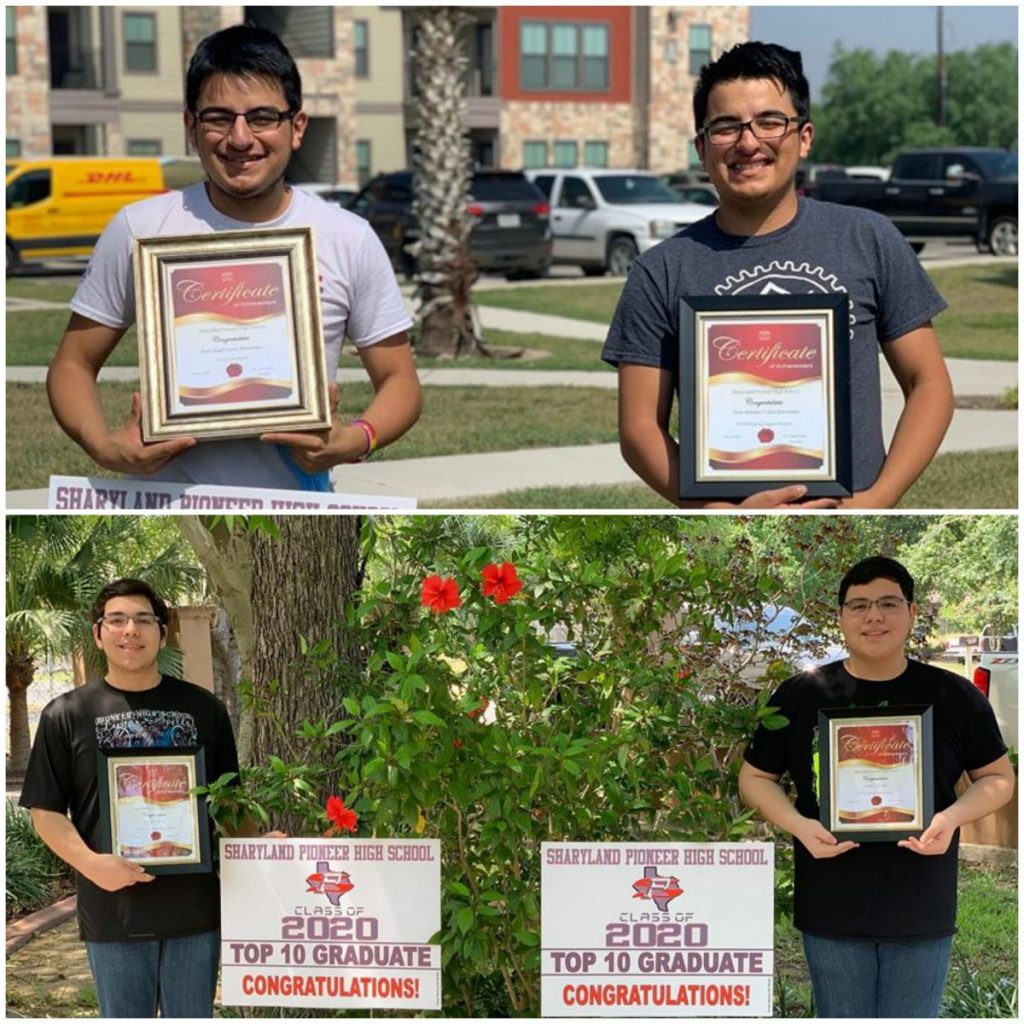 As part of the Sharyland Pioneer High School Class of 2020, both of the Gaytans have made good on their potential in elementary school and are part of their class’ Super Achievers as two of the Top 10 students.

Joseph is ranked 6th. His twin Joshua is ranked 4th.

“He was the smarter one in elementary and now I’m the one who came out on top,” Joshua said. “It’s good to have this under my belt.”

Joseph said he and Joshua have always been focused on their studies since elementary school and had a feeling he and his twin would end up being ranked in the Top 10 together.

“I didn’t know rankings were a thing until the end of my first year of junior high when I was ranked in the top 10 so I was expecting to continue being ranked high if I kept in the path I was on,” Joseph said. “My parents always told me that if I worked hard and had an education I’d have the life I’d want. That always pushed me toward trying my hardest, getting good grades and going to a good college to make a better life for myself.”

Though one set of twins being ranked as part of Pioneer’s Top 10 is itself an achievement, the Gaytans aren’t the only twins on that list. Juan Angel Luera, class salutatorian, is on the list alongside his twin brother, Juan Antonio Luera, who is ranked 5th.

“It feels weird but I’m used to this, we all went to the same elementary school and took the same classes every year since so it’s kind of funny but it felt like this was coming,” Juan Antonio said of the achievements of the Lueras and Gaytans. “We’re always together even at the end of our senior year, we’re used to it after like eight years of it.”

Though he is ranked below his brother, Joseph said he is proud of Joshua’s ranking.

“I’m glad we’re part of the list, we work hard but he deserves everything he gets,” Joseph said. “I just try my best at everything I do and don’t give up. Sometimes we push each other’s button and stuff but not to the point where we affect each other dramatically.”

As a student at Sharyland Pioneer High School, Joshua has received numerous honors and awards as part of the school’s band program, being named a two time UIL Academics Regional Champion, a part of the 2019 UIL Number Sense Regional Champion Team and a
2019 UIL Academics State Qualifier. He is also a four time state qualifier in the chess competition and a USCF chess national qualifier.

“There was healthy competition, I wouldn’t compete to hurt him, I was doing it to better myself and I know he had a similar motivation,” Joseph said. “He’s my brother and I wouldn’t want to hurt him. I’ve tried hard to move up the rankings but I wouldn’t be where I’d be without him.

Juan Angel described the academic rivalry between that and his twin as a friendly one.

“It’s a friendly rivalry where we compete and it helps us be better without really competing out of spite,” Juan Antonio said. “Since we’re both in the same classes and groups and clubs we both learn more and quiz each other and keep learning outside of class. The only real competition is that we’re both part of the UIL science team so we individually try to get first place. We push each other to be our best”

Juan Angel said he and his twin have a similar bond that pushed them both throughout their schooling.

“It feels like every other sibling relationship, we get along, we fight sometimes, talk a lot, it’s a stronger bond than everyone else though because we’re twins,” Juan Angel said.

Like the Gaytans, the Lueras are part of the school’s UIL science team with Juan Angel in the co-captain position.

Other organizations the Lueras are in include the UIL math team of which Juan Angel is the captain of, the computer science team where Juan Antonio is captain and the robotics club, National Honor Society, Skills USA and the Business Professionals of America organization.

“I like school and doing what I like to do so I am motivated to study a lot,” Juan Antonio said. “I like being in school and being in clubs and organizations surrounded by people who drive me to push forward and to never give up learning, especially when I am competing in UIL. It’s fun.”

Among the recognitions earned by Juan Angel include being named an AP scholar with Distinction, a top student in Calculus AB and Pre-calculus/college algebra, ranked 3rd place science Texas Math and Science Coaches Association state competition, being named a UIL science district champion and a UIL math regional medalist.

“I don’t know exactly what job I plan for myself in the future, but at the end of the day I know I will make the right choice,” Joshua said.

Joseph meanwhile plans to study biology at The University of Texas at Austin.

“We’re all finishing high school after we all started in the same place at the beginning,” Joseph said. We’re all good friends and are close academically and personally. It’s nice to know people think of us highly and see our relationships as something positive.”