A Sharyland Pioneer High School senior will trade in her cheerleading uniform for a Navy uniform once she graduates.

Hannah Castillo, a three-year varsity cheerleader at Pioneer, said she made plans to join the Navy to follow in the footsteps of her relatives. 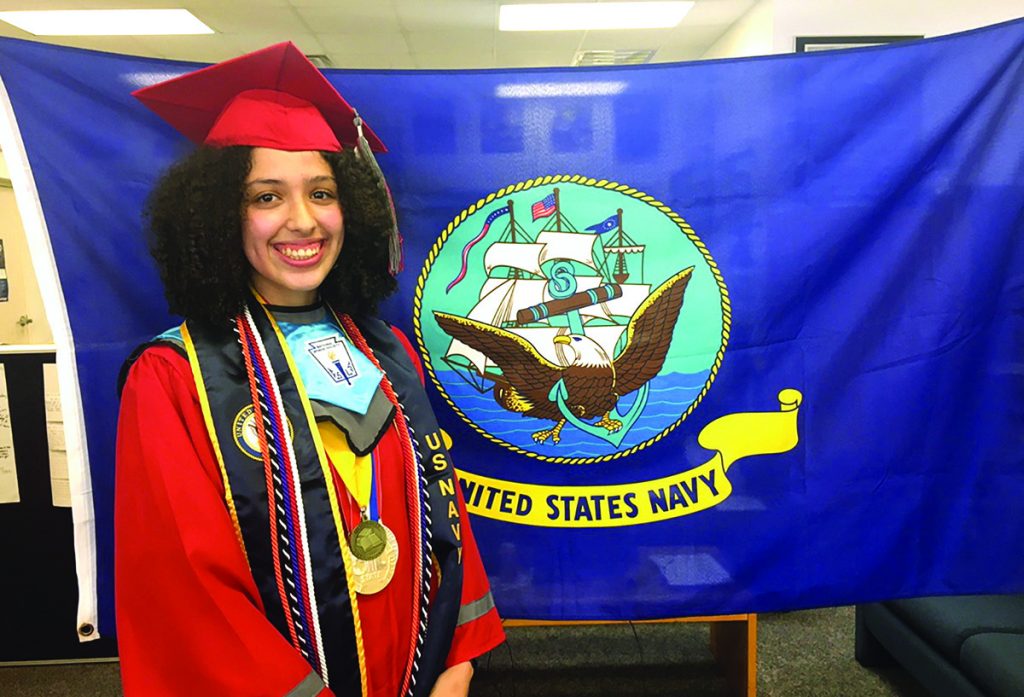 “My grandfather was a marine and my brother in law also served and I saw how they gave back to the community and was more interested in that,” Castillo explained. “If I had decided to go to college I wouldn’t be able to qualify for financial aid, putting a huge burden on my parents to support me in college. So I realized that the Navy would benefit me all because I’d gain life and leadership skills doing something I’d be interested in and my parents wouldn’t have to support me.”

“One moment that sticks out is when we had arrived at cheer camp and as we were unloading the bus, she took it upon herself to unload everyone’s luggage and give up her uniform pieces to other members of her team so they would not be penalized for not having them,” Briseno said. “Her loyalty, her meek spirit, and her hard work ethic is one I will never forget. I am beyond proud of her. I look forward to seeing all the great things she will accomplish. She’s smart, funny, caring, and a true blessing to have been a part of my team for the past four years. As a coach, you long for athletes like Hannah in our careers. I have been blessed to have known her for four, and for that I am eternally grateful. She is going to change so many people’s lives, as she has changed mine.”

Castillo said she is proud of her decision to attend the Navy as it aligns with why she joined cheerleading in the first place.

“I wanted to challenge myself physically so in junior high I joined the dance team and admired how hard the cheerleaders worked since they’re on all the sporting events and I wanted to do something that would connect me with my school and community like that since cheerleaders are so embedded in school spirit,” Castillo said. “A lot of cheerleading consists of being athletic and having the strength to perform and lift yourselves and others into the air. You develop a bond with others from doing that and I want to continue forming bonds like that.”

Castillo is graduating in the top 10 percent of her class and served as a member of her school’s National Honor Society. In the Navy, she says she plans to focus on being an environmental engineer and will start as a mechanical engineer for the Navy.

“I’m interested in learning more about climate change and global warming and once I end my contract with the Navy, I will continue to expand my knowledge on environmental engineering,” Castillo said. “My grandfather talked about all the discipline and sense of direction that came to him after serving and it sounded like it helped them later on in life. I can use this to build an impressive resume for work or college.”

Besides her grandfather and brother in law, Castillo said she wants to make her mother proud with her post high school decision.

“My mom was a cheerleader and salutatorian when she graduated so I want to make her proud,” Castillo explained. “It’s why I try to be the best I can and be a good role model. They have big hearts so I learned how to care about people from them”

Castillo said she is looking forward to her high school graduation.

“It’s been kind of sinking in the feeling that I am finishing but it hasn’t hit me yet because I haven’t been to school yet but it might when I get to graduation,” Castillo said. “I miss school and seeing my friends and teachers. But at some point, this will end, everything always gets better. It might be hard right now but it will teach you lessons in the long run.”