You may have never heard of John Neeley, but you have heard him. You have, that is, if you’ve attended a Sharyland High or Sharyland Pioneer football game at Richard Thompson Stadium in the past 20 years or listened to Q94.5 for much of that same time period.

If you are having trouble remembering then perhaps hearing such phrases as “There’s dirty laundry on the field”, when a referee threw their penalty flag or “It’s showtime”, right before a key third down play may help. Such phrases are what Neeley has used to put his mark on Sharyland ISD football games. 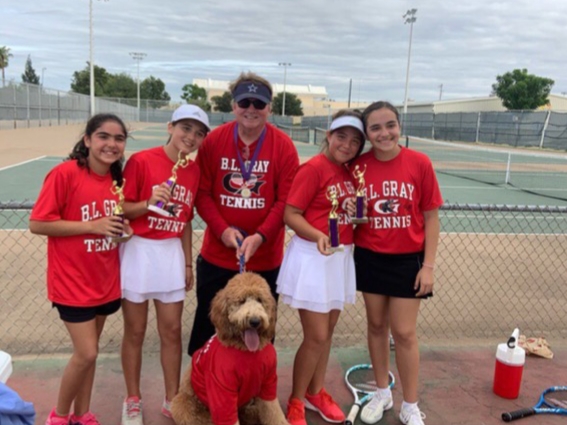 But his time as an educator and coach for Sharyland ISD, in particular B.L Gray Junior High , over that same time period has been where he has left his most lasting impressions.

Neeley recently retired from SISD after 26 years with the district but plans on continuing to bring his unique style of calling games for both the Rattlers and Diamondbacks once games resume this fall. You’ll most likely still see him on the tennis courts coaching as well and, if you are an educator; you might be at an in-service hearing his insights on teaching.

Neeley moved to the Valley in 1969 while in high school and started teaching in 1977 in Donna. After a few years working outside of education and the Valley he returned to start up again in Progresso before arriving at B.L. Gray in 1994. The rest, you might say, is history; teaching it that is; something Neeley has been doing ever since. He has done it his way as well.

“I didn’t come to teach for the kids, I came to teach to entertain myself,” said Neeley. “I was always there to have fun.”

Over the years Neeley has developed a number of games and activities that did just that. But it hasn’t been all fun and games. He’s also produced results when testing time came around. Neeley was awarded the schools’ teacher of the year twice and he has over the years been called upon to talk with other educators about his style of teaching. A student once gave him a book and asked him to write down all of the activities and games that were part of his teaching so they could be shared with other teachers because they were so great.

“This is what I am doing with my in-services,” said Neeley, “sharing my experiences (and) what works.”

“He’s one-of-a-kind,” said B.L. Gray Principal Julie Carranza. “I’ve never met anyone like him; I’ve never seen any educator do what he could do in the classroom. He’s just got that personality to get along with anybody, and that ability to connect with the students.”

Part of that connection can be found on Neeley’s Fan Club, a page on the B. L. Gray Junior High website that is full of pictures along with tongue-in-cheek comments that attest to how other’s feel about him. “Mr. Neeley counted to infinity twice” and “Mr. Neeley can speak French . . . in Russian.” are just a few of the remarks posted there.

Neeley would emcee school activities like the talent show and awards ceremonies, a talent that he also used in his weekend gig as a disc jockey for Q94.5, a local radio station that plays classic rock music.

Neeley kept the music on at school as well, playing those rock songs in his room each morning before school at a level he described as “maximum volume.” That too, had an effect on the entire school. “Every morning when you came on campus down his hallway he was blasting his music; but you loved that,” said Carranza. “It just put everyone in that good mood to be at work.”

Neeley made some history as well. In his 26 years as the school’s tennis coach his teams won over 90 district titles.

Much like the classroom, Neeley said he developed a lot of drills for his players over the years that put them in competitive situations. “You’ve got to go out there and be creative and you have to know what you’re doing.” He also emphasized the importance of playing for something bigger. “I would put some pressure on my kids, saying “Hey, you represent your school and your school is depending on you.”

Many of his players went on to contribute to the successful program that the Sharyland High School tennis teams have had over the years.

“We’ve had that consistency coming up from the junior high to the high school.” Lady Rattlers tennis coach Rosario Palacios-Cavazos expressed her views on Neeley’s contributions as well. “Sharyland tennis, as far as our high school is concerned, in my opinion,” said Palacios-Cavazos, “would not be the success that it is without John Neeley.”

Maybe there was no better way to see the impact of Neeley’s years of service to the tennis program and the district than with the parade that was held last week in front of his house to give people the chance to thank him. Both Neeley and Palacios-Cavazos mentioned the large numbers of ex-players and students who came to offer up their congratulations and best wishes as they drove by. “It was quite a touching thing,” said Neeley.

And while that parade will stick with Neeley, it is a letter he received a few years ago from an ex-student that he described as “one of the best memories that he has.” The student thanked him for the fact that he “brought it every day and always gave it 100 percent. I realized you probably have your problems too, because all people do, but you never let that stop you from teaching; from giving us 100 percent.”