Ten days ago, the Mission Fire Fighters Association received a letter from Attorney Horacio Peña, Jr. on behalf of Hollis Rutledge of HRA, Inc., a grant writer contracted as a consultant with the city of Mission. 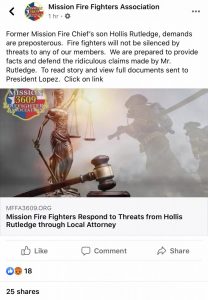 In the letter, Peña states that Michael Silva, a firefighter for the city of Mission and a member of the Mission Firefighters Association, made “defamatory statements” during a city council meeting held January 13, 2020. Silva spoke during the Public Comments portion of the meeting, saying Hollis Rutledge & Associates, Inc. had failed to apply for and submit a grant request to the Office of the Governor for the Homeland Security Grant Division 2020 Border Zone Fire Department (or Border Zone Grant).

Silva alleged that the Mission Fire Department missed out on the Border Zone Grant, which had the potential to award the first responders approximately $250,000 to $500,000 in funding. Silva called for the city to end the contract held with HRA, Inc.

“Do we need to have an internal grant writer? Do we need to look into someone else to come in here and do the job? Because obviously he failed to do his job,” Silva said. “I hope you’ll recommend what the firefighters recommend – and I’m speaking on behalf of them – is terminate his contract for the failure, that he did not do his job.”

During the executive session of that meeting, the council reviewed Rutledge’s Grant Consultant Contract for “errors and omissions.” No action was taken on the item.

Council did not respond to Silva’s comment, as they are legally unable to respond to any public comments made that are unrelated to an item on the agenda. The letter from Peña also includes the city council, saying they did “nothing more than sit on their hands” as Silva spoke.

At a subsequent city council meeting, Rutledge himself made a public comment, stating that the firm has brought over $5.84 million in the last few years for the Mission police and fire departments.

“We have brought funds that have had a direct effect on the safety and quality of life for all residents of the city of Mission,” Rutledge said. “Our record with Mission is successful and impeccable.”

The letter lists a timeline of correspondence between HRA, Inc., the Mission Fire Department and city administration. Peña said the city administration and Fire Chief Gilbert Sanchez met emails from HRA, Inc. throughout the application process prior to the Border Security Grant with silence until four days after the application submission deadline.

Rutledge asked for an apology from the Mission Firefighters Association to be issued in the Progress Times, The Monitor and other local newspapers, and a retraction of Silva’s statement. Peña wrote that a failure to comply with the demand would allow HRA, Inc. “to seek exemplary damages and file suit for defamation.”

When asked for a comment, Peña said the letter speaks for itself.

“There’s a period under the Civil Practice and Remedies Code that gives them a chance to retract if they want, and if they don’t want to retract then we will hopefully go forward,” Peña said. “There’s a statute that requires me to put them on notice in order to avoid any type of exemplary damages – they have an opportunity to retract what they said.”

If they do not retract, Peña said he will be meeting with Rutledge to see what they plan to do moving forward.

This morning the Mission Fire Fighters Association posted on Facebook with their own statement. They said that Mission firefighters have the right to speak about anything in regards to the city council actions or agenda items, as any other citizen of Mission has.

The Mission Firefighters Association has representation based out of Houston, but attorney Marco De Luna handles them locally. De Luna said that nothing has been made official yet considering it was just a threat of litigation, but in the event that a suit is filed the firefighters plan to fight back.

“Although they called out Mike Silva personally in the letter, the letter was sent directly to the firefighters union,” De Luna said. “These men and women put their lives on the line every single day and every single night for the citizens of Mission. You would think that they’ve earned the right to be able to go just like any other citizen and give their opinions, especially when it’s an open forum in the Mission city council meeting.”

De Luna said he knew they had earned the right to speak, and he did not feel Silva’s statements were derogatory.

“He was just stating what he believed the facts were,” De Luna said. “And if they feel that’s in dispute, that’s their opinion. The Mission Fire Fighters union is not going to be backing down. If they want to go forward with a lawsuit, by all means that’s a right that they have, but they [the union] will be defending themselves. And they’re not going to be issuing an apology.”